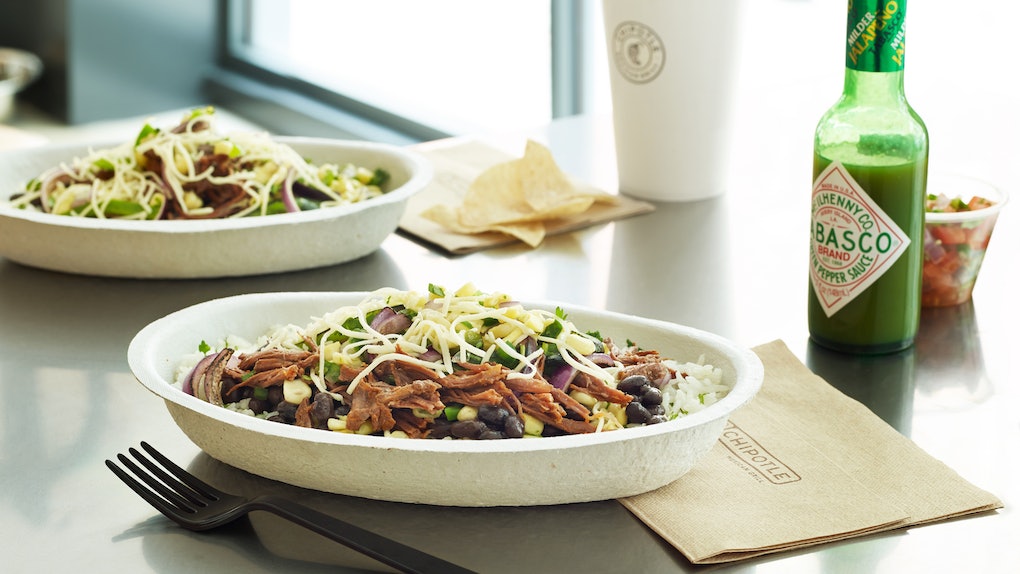 Let's face it: Delivery fees are kind of a drag, regardless of which restaurant you order food from. It seems like Chipotle understands that, because the company is axing its delivery fees until the beginning of January 2019. There are stipulations, of course — but for the most part, Chipotle's Free Delivery Bowl will help you save some cash throughout the next few weeks. If you like sports, you'll be happy to know that the promotion was inspired by football fans. If you don't, you can look at the special as a generous holiday gift.

Before I talk about how Chipotle's Free Delivery Bowl is connected to football, let's talk about what it actually is. According to a press release, the Free Delivery Bowl is a special that's being offered between Dec. 18, 2018, and Jan. 7, 2019. During that time frame, Chipotle customers can order food from the company's website or app and get free delivery for any orders that cost $10 or more. In other words, if you live by a participating Chipotle restaurant, you can order $10 worth of Chipotle snacks and get free delivery on your order.

Whether you like football or not, that's a pretty great deal.

By now, you're probably wonder why Chipotle's Free Delivery Bowl is even related to football. (I promise that it'll make sense soon.) According to Chipotle's press release, it all started with the Burrito Bowl's name.

Chris Brandt, chief marketing officer at Chipotle, talked about the relation in a press release. He said, "Given the iconic nature of Chipotle's Burrito Bowl, many consumers have pointed out that we should sponsor a bowl game. We listened and decided to do something about it. But, rather than spending millions on a traditional game sponsorship, we decided to give that money back to our fans in the form of free delivery."

In other words, people compared the "bowl" in "Burrito Bowl" to major sporting events like the end-of-year college football bowl games and suggested that "the company should sponsor a bowl game," per Chipotle's Twitter account.

Now that you know what Chipotle's Free Delivery Bowl is and where the idea came from, you're probably wondering how you can take advantage of it. Thankfully, the process is super easy. According to Chipotle's press release, you'll need to place an order on the company's website. Once you arrive on the ordering page, you'll be asked to provide your address, city, or zip code. Then, a list of nearby Chipotle stores will populate on your screen. At that moment, you can select one of them and carry on with your order.

If you'd rather use Chipotle's mobile app to place your order, you can do that instead. Just keep in mind that your order will still need to be at least $10, and the Chipotle you order from must be participating in the promotion. Whether you decide to order using the company's website or app, you'll also have to make sure you live within Chipotle and DoorDash's delivery areas, per the company's press release.

If you've checked all of those boxes and hit the order minimum, you can enjoy a Chipotle meal without paying a delivery fee. Now that's something customers can enjoy (whether they're football fans or not).