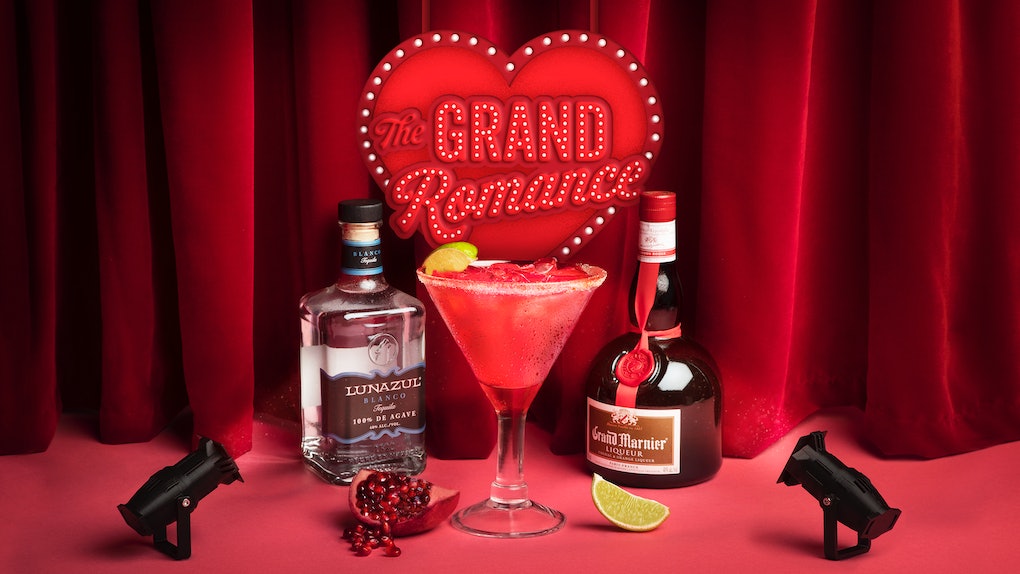 Chili's' $5 Margarita For February 2019, The Grand Romance, Has A Valentine's Day Vibe

It's officially February, y'all, and things are finally starting to heat up, thanks to a certain holiday that's right around the corner. Whether you're single, attached, or one half of an "It's complicated" situation, Chili's' $5 Margarita for February 2019, the Grand Romance, has got you covered with Valentine's Day vibes all month long. Let's raise a glass, because it's officially "treat yo' self" season, and I'm so here for it.

On Friday, Feb. 1, the food chain started off happy hour right with a limited-edition margarita that promises a big serving of self-love in every sip. According to a post shared on Facebook, the cocktail contains Grand Marnier (which is basically a delicious blend of Cognac brandy and a distilled essence of bitter orange) as well as Lunazul Tequila. It looks like February's margarita owes its bright red color to pomegranate juice, which is also featured in the Facebook image. Add a lime and some ice, and you've got a boozy margarita that'll imbue your tastebuds with a delicious and potent mixture of tart and sweet fruitiness.

The best part is that like always, Chili's margarita of the month is only $5, meaning you can get buzzed off of the cost of two Starbucks coffees.

"Grand Marnier and Lunazul are hooking up for this love infused MOTM," the Facebook post reads. "It’s The Grand Romance and it’s only $5… because everyone loves a cheap date."

So, I don't know about you, but this sounds like the recipe for a successful Galentine's night out in the making with your squad.

Or, if you're planning a night out with bae come Feb. 14 (after all, what says "I love you" quite like a round of margs?), you might want to take a pointer from the hilarious ways that Chili's customers are planning to get their Grand Romance fix this month.

Meanwhile, if you're looking for a more low-key celebration of the day of love, Chili's has also got you covered. I have mixed feelings about going out to a restaurant on Valentine's Day, just because it can be a little bit overwhelming. Netflix 'n Chill aficionados will be all about Chili's new 2 for $25 deal, which is basically a date night idea that guarantees you can enjoy all your favorite dishes without having to dine with a hundred other couples or foot a hefty bill at the end.

The promo includes an appetizer, two full-sized entrees, plus a dessert, so you and bae can dig in to a Valentine's Day spread while binge-watching the Fyre Festival documentary on Netflix. Or, you can just order the 2 for $25 deal for a solo night in, because nothing says self-love quite like a bowl of White Spinach Queso and a warm Chocolate Chip Cookie Skillet all to yourself. Just remember that you'll have to make your own version of a Grand Romance margarita at home if you choose to take advantage of this deal, so I'd weigh your options.

The good news? The Grand Romance margarita will be available every day in February, so grab your friends or your S.O. and drink up to a month of treating yourself.