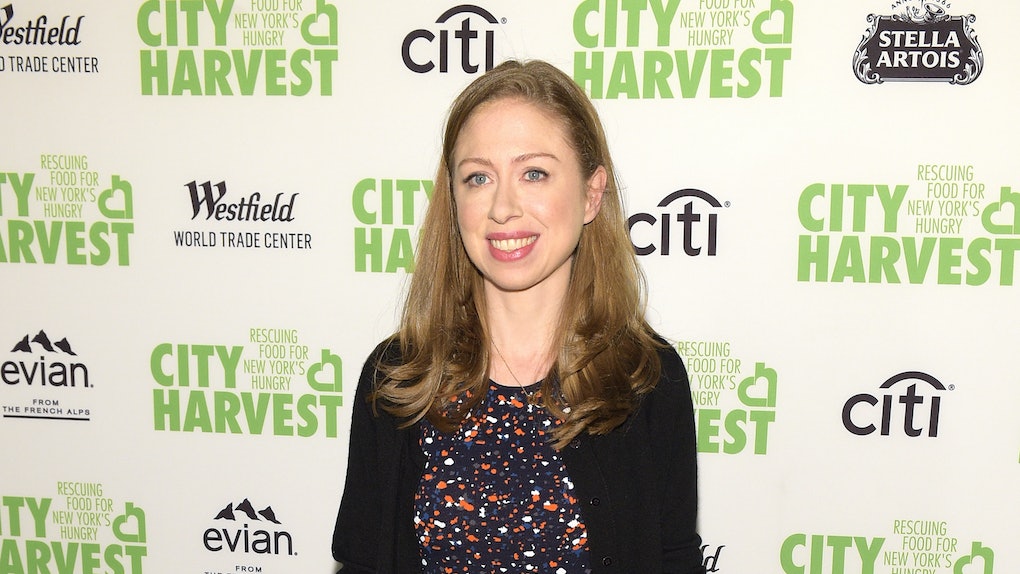 Chelsea Clinton Is Pregnant With Her Third Child, So Welcome The Newest Addition

Congratulations to the growing family! There's an upcoming addition to the Clinton "dynasty," which will soon be welcoming their tiniest member. Chelsea Clinton announced her third pregnancy via Twitter on Tuesday, Jan. 22, and the future is bright, not to mention full of babies.

The new arrival will be the third child for Clinton and husband Marc Mezvinsky, who married in 2010 and are already parents to future big sibs Charlotte, 4, and Aidan, 2. It will also be the third grandchild for her famous parents, President Bill Clinton and former secretary of state/presidential candidate Hillary Clinton (who, USA Today points out, calls herself a "doting grandmother" as the only descriptor in her Instagram bio). While Clinton didn't share too many details in her tweet announcement, she said that the baby will arrive in the summer, so personally I'm already hoping for some cute photos of a baby inside a hollowed-out watermelon. She wrote in the tweet,

Marc and I have loved watching Charlotte be such a wonderful big sister and we’re excited to watch Aidan become a big brother! We cannot wait to meet our newest addition later this summer.

Clinton was immediately flooded with congratulations from all corners of social media.

She also confirmed that her parents were thrilled to have another grandkid on the way, telling one well-wisher that "they are!" in response to a comment about how happy they must be.

Though her name is most associated with politics, as an adult Clinton has focused on other things, including a prominent role in her family's Clinton Foundation, which works on issues like economic opportunity, global climate change, and civic engagement. She's also the author of several children's books, including She Persisted, which highlights 13 American women who "changed the world," including figures like Helen Keller, Sally Ride, and Harriet Tubman. Another upcoming children's book, set to be released in April 2019, focuses on endangered species and how to help conservation efforts. It looks like it's well timed — the book will be just in time for her to be able to read it to the newest arrival, as well as Charlotte and Aidan.

On the other hand, in October, she told USA Today that while her kids are too young for some of her books, she does discuss civic responsibility and environmentalism with them (probably in some smaller words). "We talk about climate change, and we talk about the importance of what we can do at home. So we talk a lot about the themes of the book," she said of her previous book Start Now! You Can Make A Difference. "I’m excited for when they are little bit older and they can read it."

Well, she'll get that experience three times over now. Congrats to the growing family, and welcome to the newest addition!