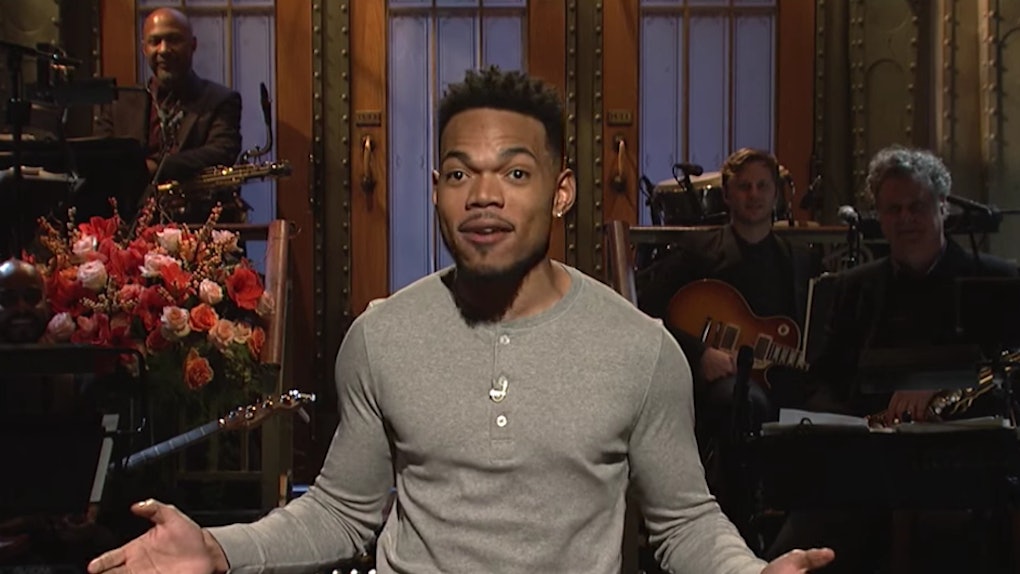 The holidays are upon us, and one thing we can all be thankful for this year is awesome entertainment on Saturday night, starting with one of everyone's favorite artists. Chance the Rapper hosted SNL, begged Obama to return, put a fun spin on Thanksgiving dinner, and provided comedic relief we all need during the Nov. 18 episode. A "Chance-giving" night was the perfect way to kick off this time of year, even if it made us a bit nostalgic about Obama's time in office.

It all began with one goal: to become the Mariah Carey of Thanksgiving (clearly, a difficult feat). Chance the Rapper offered his own version of "All I Want for Christmas Is You" with a hilarious tune dedicated to Turkey Day and all that goes with it: bizarre relatives, people you don't really know, and a bundle of family drama.

"I want my song to honor what's truly special about this holiday, how it's the one time of year you invite all of your relatives to dinner, even the ones you can't stand," he said during the opening monologue. "So to all you outcasts and weirdos in the family, this one's for you."

Before we knew it, woke nieces, promiscuous uncles, and a bunch of other colorful characters arrived on the scene to sing about Turkey Day.

So, what's the one topic we can't avoid on Thanksgiving but really should? Politics.

It wouldn't be the holidays if we didn't discuss what's happening in Washington, right? So naturally, SNL decided to put another fun spin on current affairs. Chance the Rapper joined forces with Kenan Thompson and Chris Redd to pay homage to Boys II Men and #44. In a soulful, R&B music video, the trio decided to sing about a long lost love... with former President Barack Obama.

The melancholy tune was guaranteed to tug at everyone's heartstrings. It reminisced about the good 'ol days with President Obama, all while providing another blast from the past: a '90s music video, complete with oversized suits, candles galore, and scenes of rain pouring down on the singers, which of course really delivered the emotion. The artists sang,

I turn the TV on and cry

I need you in my life

So come back Barack

We didn't know just what we had

"I need you in my life, so come back Barack."

But of course, that wasn't the only skit dedicated to politics.

The hilarious Kate McKinnon took on one of her popular roles as Attorney General Jeff Sessions, and naturally, everyone was glad to see her in character. She joined Colin Jost on "Weekend Update" as Sessions to discuss the memory problems that oftentimes seem to be a very sensitive subject. Making quite the splash upon meeting with Jost, our beloved Sessions said, "“When I say ‘I do not,’ you say ‘recall,’” McKinnon's Sessions said. Ready? "I do not..."

McKinnon also added another character to her growing repertoire: Julian Assange. Assange met with Donald Trump Jr. (Mikey Day) and Eric Trump (Alex Moffat) to dig up dirt on Hillary Clinton, but not before Eric revealed that Assange looked like Draco Malfoy. "Come Back, Barack" was only the beginning of the Nov. 18 SNL episode.

One thing is for sure: There is certainly a lot to discuss when it comes to Washington, but if you're looking to lighten the mood during your second helping of turkey and stuffing, might I suggest talking about SNL? Happy holidays, everyone.