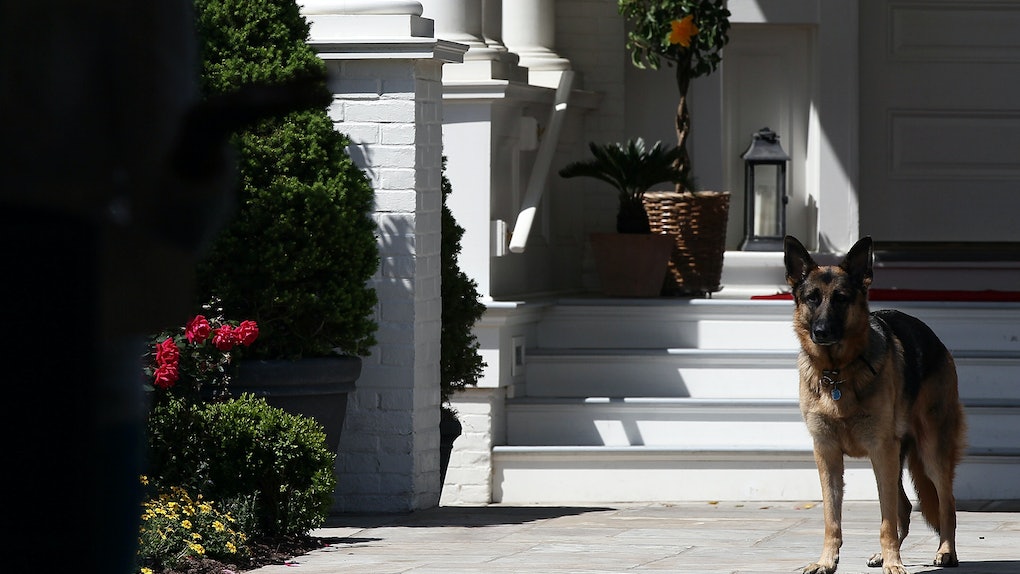 Even good boys have their bad days, especially when it comes to the lively life of a presidential pup. President Joe Biden's pair of German Shepherds, Champ and Major Biden, left the White House after a biting incident with a member of the security team, per CNN. While it's unclear how long Champ and Major will be in the dog house, it's nice to know these two buddies are staying together.

The pair was reportedly sent back to the Biden family home in Delaware the week of March 1, after Major had what one bystander described as a "biting incident," per CNN. Major, the younger of the two dogs at just 3 years old, was adopted by Biden in November 2018 from a Delaware animal shelter, making him the first shelter dog to ever live inside the White House. However, it seems like Major is having some trouble adjusting to a hectic presidential lifestyle. In the days since he's moved to the White House, Major "has been known to display agitated behavior on multiple occasions, including jumping, barking, and 'charging' at staff and security," CNN reports. The White House did not immediately respond to Elite Daily's request for comment on the incident, or whether the dogs will return to the White House.

But while Major may have been a bad boy on this one occasion, that doesn't mean he loses his regular status as a certified good boy. According to the American Veterinary Medical Association (AVMA), aggressive behavior in stressful situations is actually quite common for dogs. "Dogs bite as a reaction to something," AVMA reports, emphasizing how they can become aggressive if they feel threatened, scared, startled, or protective. "If the dog finds itself in a stressful situation, it may bite to defend itself or its territory." Given that the dogs have moved from a private home to the busy and bustling White House — which functions as a residence, a workspace, and a public venue — it's easy to see why an anxious pup could become aggressive.

In a Feb. 28 interview with singer and talk show host Kelly Clarkson on The Kelly Clarkson Show, First Lady Jill Biden said she was doing her best to make the dogs feel at home. "I've been getting obsessed with getting our dogs settled because we have an old dog and we have a very young dog," she explained. "They have to take the elevator, they're not used to that, and they have to go out on the South Lawn with lots of people watching them. So that's what I've been obsessed with, getting everybody settled and calm," she added.

AVMA states that one way to curtail aggressive behavior is to socialize your pup around other dogs and people: "Socialization is a good way to help prevent your dog from biting. [It] helps your dog feel at ease in different situations." As of March 9, the two pups are reportedly settled back in their cozy Delaware home, where they'll no doubt feel more pawsitive about their surroundings.