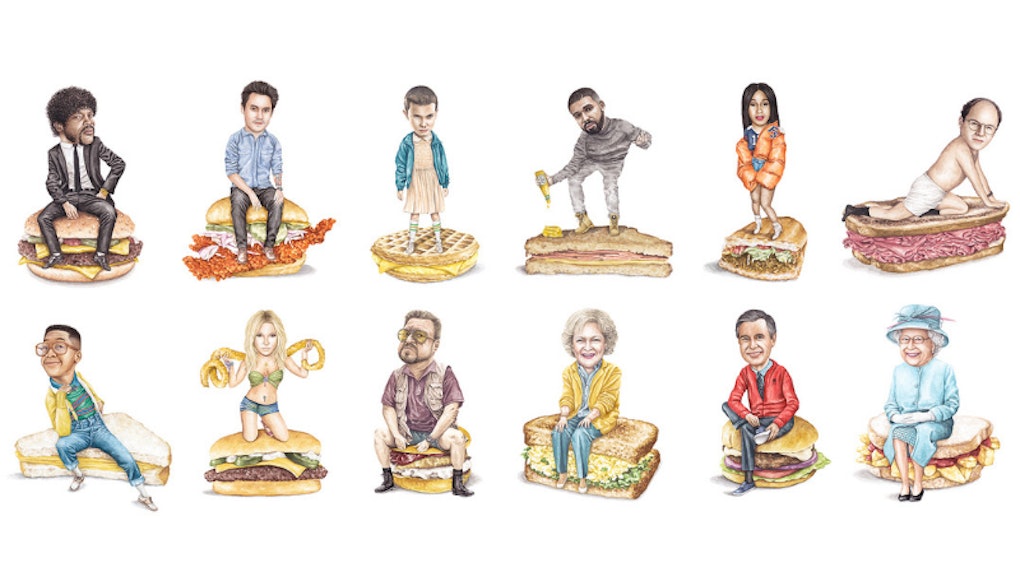 In a society that's obsessed with all things celebrity and food, Jeff McCarthy — whom you might know better as the man behind Celebs On Sandwiches — is hilariously reinventing the wheel when it comes to combining those two things in one must-follow Instagram account.

The Los Angeles-based artist spends hours painstakingly recreating the biggest stars on sandwiches in shades of watercolor. It's the random but genius mashup that you never saw coming, and the fact that his subjects are displayed in a medium that flips the "instant" part Instagram on its head is all the more fascinating (and hilarious).

McCarthy's legions of fans attest to his talent for expertly combining these unusual elements, as well as nailing the celeb-sandwich combinations you never knew you needed. With over 228,000 followers at the time of publication, you'll be interested to know Celebs on Sandwiches got its start back in 2015 when McCarthy was musing over society's interest in the entertainment industry while holding, no surprises here, a sandwich.

"My girlfriend and I were talking about our culture’s obsession or love affair with celebrity and food, and I just kind of thought that pairing the two together might be a fun series to be able to post on Instagram," McCarthy remembers.

McCarthy, who'd temporarily put his love of illustrating and painting on hold while he worked as a commercial director in Los Angeles, was thinking about how to get back into the medium as a hobby when the idea originally came to him.

I’m always looking to [paint] people who, first and foremost, would appreciate the humor and have a sense of humor about it.

McCarthy's first project — a recreation of Amy Schumer on a turkey and avocado sandwich — was posted on Aug. 14, 2015. He soon followed up with a rendition of Nick Offerman as Ron Swanson stepping on a bacon sandwich and a tongue-wagging Miley Cyrus posing on a bacon, egg, and cheese sammie.

McCarthy's account gained traction as he continued to post, but it was only after catching the eye of a certain celebrity that things really took off.

"I do remember early on that the first celebrity whose attention I gained was Drew Barrymore," he recalls about the 50 First Dates star, who shared the image in March 2016. "I remember she reposted the painting that I did of her, and that was kind of a turning point."

"After she posted, there were a number of other celebrities who saw the work and gave positive feedback with comments or with reposts, and that’s really been a big contributor to growing the following — just having the reposts from the celebrities and the recognition from them," he continues. Jennifer Garner, Snoop Dogg, Dwayne Johnson, and John Mayer are among the stars who have also reposted their watercolor likenesses.

Almost four years in, McCarthy's account has continued to grow and attract celebrity attention — a surprising longevity in the ephemeral world of Instagram. The 32-year-old attributes the success to consistency and a broad range of subjects.

A lot of times I’ll do a little bit of investigating and see if I can find if that celebrity has a specific type of sandwich that they like or favorite food.

"It’s really about doing a mix of subjects from people who are more iconic and timeless to immediately culturally relevant people, like someone who pops up on the news versus someone like Betty White, who’s timeless and iconic and someone who everyone loves," McCarthy says.

In addition to countless celebrity fans, families and friends of several stars have had the artist commission portraits of their loved ones. The 32-year-old recalls that Seth Rogen's wife was one of the first to commission something as a Hanukkah present for the Superbad actor.

"Jason Segel’s sister commissioned a piece of him," he adds. "Jesse Tyler Ferguson commissioned a whole series of the cast of Modern Family to give them as Christmas gifts a couple years ago, so I did the whole cast.

And while one glance at the the 32-year-old's page shows that he has now covered almost every big name spanning show business, social media, and sports, McCarthy says there is one major factor that determines whether or not he wants to paint someone.

"I’m always looking to [paint] people who, first and foremost, would appreciate the humor and have a sense of humor about it," he says. "Obviously, there’s a sort of absurdity to the idea behind it, so I think that anyone who kind of understands that and doesn’t take it too seriously... those are the types of people I like to paint."

I'll admit that I was most intrigued by how McCarthy chooses the corresponding sandwiches. Plus, in a world of limited sammies, how does one prevent repeats?

"A lot of times I’ll do a little bit of investigating and see if I can find if that celebrity has a specific type of sandwich that they like or favorite food. Or, maybe it’s a food reference from a movie they’ve been in or a TV show," he says. For example, you can catch Will Ferrell as Ron Burgundy on a BBQ brisket sandwich and Nick Offerman as Ron Swanson on the aforementioned bacon sandwich.

Other times, celebrities will share their picks, which is what happened when Khloé Kardashian said she'd love to be posed atop an Oreo.

McCarthy cops to a few repeat sandwiches, although he'll do slight variations to make each one unique (i.e. Andy Warhol smizing on top of a grilled cheese with a can of Campbell's tomato soup in the forefront).

Considering the fleeting quality of fame where stars can become household names (and drop out of the public eye) seemingly overnight, it's an interesting juxtaposition that McCarthy chooses to memorialize his subjects in watercolor.

I certainly enjoy the act of painting, so that’s what I try to focus on. It’s really always been about the content, and being able to put something out that people can enjoy and kind of get a kick out of.

"They usually take anywhere from like 5 to 15 hours, really, depending on the imagery," the painter explains. "They’re all original watercolor paintings, so it’s kind of a time-consuming medium." As such, he's started sharing behind-the-scenes shots and time lapses of the lengthy process on his Instagram Story as the account continues to transition from a hobby to a business.

McCarthy says he really started to see things growing business-wise about two years ago, when people started requesting prints of the celebrities on CelebsOnSandwiches.com.

"I was just seeing more of a demand and people requesting more prints of the posts that I did on Instagram. And so I started offering limited runs of prints for certain celebrities, and as people continued to buy them and request other celebrities, it grew until it was a full-fledged business," he says.

When it comes to the future of @CelebsOnSandwiches, the medium itself continues to be the painter's focal point. Like any artist, he's focused on the work he's putting out into the world. "Sometimes, I’ll look back at the very early ones and kind of cringe," McCarthy admits, laughing. "But, it's also kind of good to know that I have improved. I’ve put in hours and hours and hours at this point, so I think there’s been a progression from some of my earlier paintings."

Still, with the account's success and the oft-difficult transition of turning what you love into a bonafide living for yourself, McCarthy says he chooses to focus on what made him decide to start the account in the first place.

"I certainly enjoy the act of painting, so that’s what I try to focus on. It’s really always been about the content, and being able to put something out that people can enjoy and kind of get a kick out of," he explains. "There are obviously other facets of making things run smoothly, but first and foremost, it’s really just about the painting."

That, and just having fun with his content, seems to be McCarthy's recipe for success.