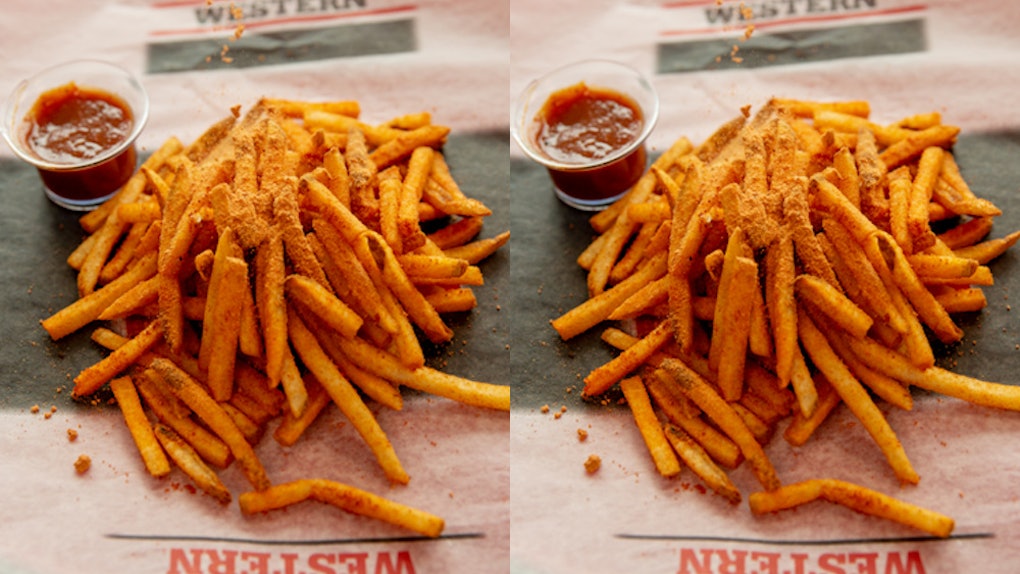 Carl's Jr.'s New Western Fries Have All The Flavors Of The Western Bacon Cheeseburger

Most Carl's Jr. fans praise the chain for its moderately priced burgers and sweet creations (seriously, those Froot Loops Mini Donuts are out of control!). But as of May 20, the renowned West Coast franchise is serving up one of its most popular burgers in the form of French fries. Yes, you heard that loud and clear, folks — if you haven't already heard about Carl's Jr.'s new Western Fries, brace yourselves. Basically, they're a super tasty remix on one of the chain's bacon cheeseburgers, and I'm beyond excited to try them.

As of Monday, May 20, the Carl's Jr. chain will start serving Western Fries, which is a new twist on the iconic burger. According to the brand, Western Fries feature crispy natural cut French fries which are smothered in a bold Western seasoning. And I don't know how they do it, but somehow, the seasoning manage to evoke the flavors of charbroiled beef patties, BBQ sauce, cheese, and sesame seed bun all on its own, per the brand. Each order comes also with a small portion of BBQ sauce for dipping (because, duh).

Um, these sound almost too good to be true, and as someone who is here for any and all dipping sauces, I'm pretty excited about the BBQ sauce.

OK, do you see this? Apparently all that seasoned goodness is going to taste just like the burger. Now, I'm not sure exactly how the brand got all those flavors in there, but I am interested to give the a try to see if they live up to the claim. It's not clear if these fries will be around forever, so you'll want to try them sooner rather than later.

If you find yourself craving a little more burger than usual, on the other hand, have no fear — the new Triple Western Bacon Cheeseburger is also a new addition to menus, and it takes the classic Western Bacon Cheeseburger to the next level. It contains three (yes, three!) charbroiled all-beef patties, four thick slices of Applewood smoked bacon, melty American cheese, onion rings, BBQ sauce, and a sesame seed bun. It sounds like — well — a lot, but it's bound to fill up even the hangriest burger lovers. This bite is only around for a limited time, per the brand, so do with that info what you will.

There's something about summertime and BBQ season that makes choosing a burger as your meal just seem like the right thing to do. Of course, there are plenty of options out there already, but that doesn't mean you can't add these burger-esque fries to your "Burgers of Summer 2019" list. LOL, so maybe that's not a thing, but it could be!