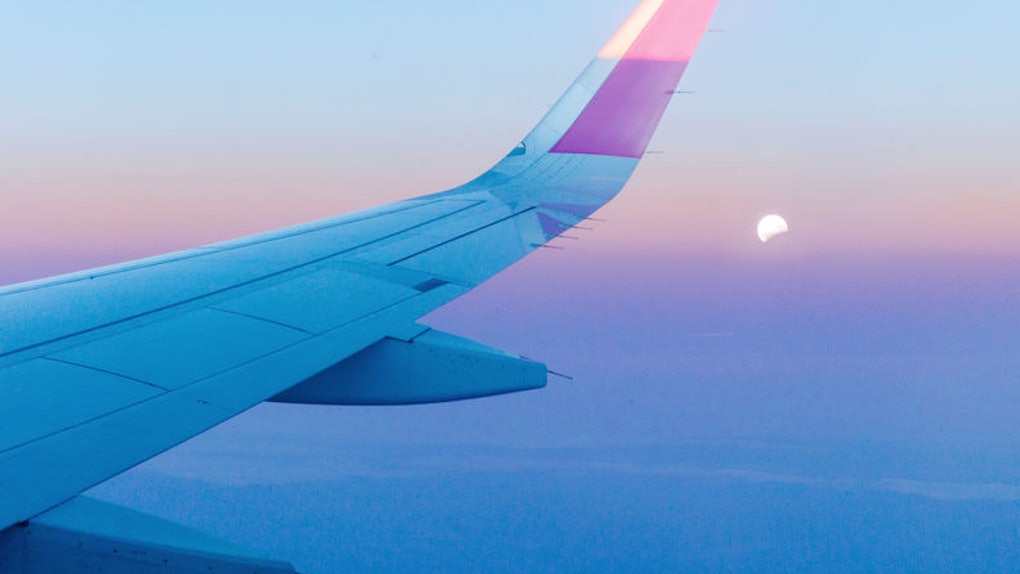 Can You Fall In Love On An Airplane? A Shockingly High Percent Of People Do

I don't know about you but, when I board a plane, I'm not typically on the lookout for love. No, instead, I'm usually a couple of Advil PMs and maybe a glass of wine deep drooling on the shoulder of the lucky stranger who happens to be seated next to me. Anyone who dares try to spark conversation with me is nothing more than an obstacle standing between me and my precious sleep — not a potential soulmate. That being said, a new study finds that it's actually super possible to fall in love on an airplane.

The study, conducted by the bank HSBC in July 2018, used a survey to ask over 5,000 travelers from 141 different countries about their experiences traveling and any people they met on the plane. What they found was pretty fascinating. Apparently, one in every 50 travelers actually managed to meet "the love of their life" on a plane. That's two percent, so not a ton but, hey, it's still two percent more than I expected!

If you're American, the likelihood of finding love in the sky increases by a lot. The survey actually found that two U.S. couples meet on the average flight. Two couples a flight! That's a lot!

I've gotta be honest. The logistics of meeting The One on the plane really stress me out. What if they live across the globe from me? What if this whole "meeting The One" thing gets in the way of a particularly great sleep?! There are lots of kinks that would need to be ironed out in order to ease my anxious mind before I got on board.

That being said, when I think about it in its most ideal terms, the concept is pretty adorable. Imagine me two Advil PMs and a glass of red wine deep drooling asleep on the shoulder of the random dude in the middle seat then I wake up at my destination only to find that, oh, man, this guy is a total hottie. We start talking as we land and realize we both live in New York. Obviously, we plan for a date the next day and, when we go on said date, it's confirmed that he's the love of my life. We spend the rest of our lives together in bliss.

It literally sounds like a fairytale. And, for the most part, it's actually a reality for one in 50 travelers.

Even if you don't wind up meeting the love of your life on your next flight, there's a chance you'll meet someone else who could change your life in another way. Sixteen percent of travelers reported that they had made some sort of business connection on a flight. A slightly smaller 14 percent were able to make long-lasting friendships with people they met on planes. At the very least, 51 percent said they've had a conversation with a stranger on a flight.

If nothing else, I think this information has convinced me to stop sleeping so much on airplanes. Apparently, great things can happen when you're awake!