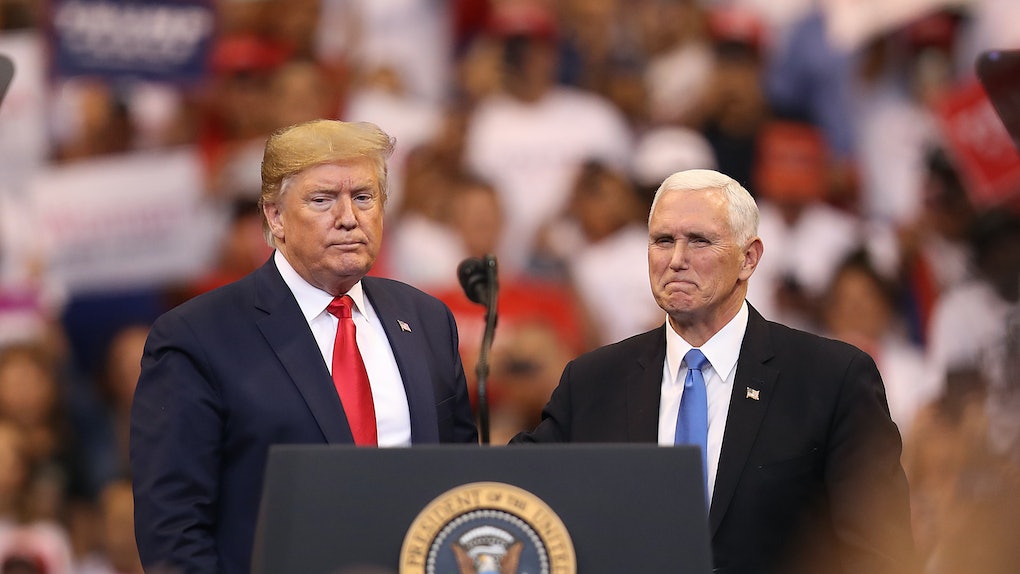 Can Trump Pardon Himself After The 2020 Election? Well, It's Complicated

It's clear President Donald Trump knows his position as commander in chief comes with an immense amount of power and influence. The U.S. Constitution explicitly allocates several legal privileges to the president, including the power to approve or veto legislation, direct the military, and (perhaps most notably, considering the circumstances) the power to grant pardons. In light of November's high-stakes political reckoning, you may be wondering: Can President Donald Trump pardon himself after his presidency is over? Like most things in 2020, the answer is complicated.

Since he assumed office, Trump's long list of alleged misconduct has been at the center of the public eye, although as of November 2020 he has not officially been charged with any crimes. The president has faced multiple accusations of sexual assault from more than a dozen women, all of which he has denied, been the subject of investigations into his finances, and dealt with allegations of campaign misconduct, which the campaign has denied. Trump has frequently characterized allegations of misconduct as a partisan-based "witch hunt" run by his political opponents. In June of 2018, the president asserted via Twitter that he possessed the "absolute" power to pardon himself. "Why would I [pardon myself] when I have done nothing wrong?" the president asked. Still, many investigations are ongoing.

Now that the 2020 election results are finally in, Trump is expected to join the small club of one-term U.S. presidents. The winner of the election, Democratic President-elect Joe Biden, is scheduled to be sworn into the White House on Jan. 20, 2021, and many Americans are wondering about what comes next for current President Donald Trump — especially when it comes to potential criminal charges against him after he leaves office.

Again, as of November 2020 Trump has not been charged with any crimes. However, as of now, he can't be — a long-standing legal precedent says that a sitting president can't be charged with any crimes. But it absolutely can happen after a president leaves office. Matthew Dallek, Ph.D, a professor of political history at George Washington University's Graduate School of Political Management, tells Elite Daily that part of the reason Trump was so eager to be re-elected is to avoid becoming vulnerable to legal action. "He enjoys the protections the presidency gives him from indictment in multiple ongoing investigations on tax fraud, campaign finance violations, obstruction of justice, and more," Dallek says.

Historically, no U.S. president has ever used their power to pardon themselves of alleged crimes committed while in office. The closest any president has ever come was likely in 1974, when there was plenty of evidence to impeach — and likely charge — President Richard Nixon for trying to conceal his part in the effort to bug Democrats during the 1972 presidential election. This affair later became known in history books as the Watergate scandal.

To exonerate the president and other defendants for their involvement, the Nixon administration floated the idea of a self-pardon in a meeting on Aug. 1, 1974. However, mere four days later, the Office of Legal Council (OLC), part of the U.S. Department of Justice, issued a memorandum opinion that stated: "Under the fundamental rule that no one may be a judge in his own case, the President cannot pardon himself."

While this OLC opinion seemed to deny the possibility of a self-pardon, it seemed to list a number of different legal routes the president could take to absolve himself anyway — the most notable of which was delineated under the 25th Amendment, which states that if the president was "temporarily unable to perform the duties of the office, the Vice President would become Acting President and as such could pardon the President." After receiving a pardon, the president could either resign or resume his position in office. On Sept. 8, 1974, that was what happened, when Nixon's successor, President Gerald Ford, pardoned Nixon for any crimes he may have committed as part of the Watergate scandal.

Political scholars state that the Trump administration could take a similar route in 2020, should the necessity arise. "[Trump] could resign before his term is over and elevate Vice President Mike Pence to assume the presidency for a mere six weeks," allowing Pence to grant Trump a pardon, Dallek says.

There's also the fact that presidential pardoning powers are actually more limited than Trump seems to think — presidential pardoning powers extend only to federal crimes, not state-level crimes. Meanwhile, many of the investigations into Trump or his associates are at the state level in places like New York, the site of many of his business dealings.

With all of the ongoing investigations against him, whether Trump will even require a pardon or not is still up in the air. However, one thing is certain: in just a few more weeks, Trump will leave the presidential office — and only then will he be truly vulnerable to facing legal consequences to his alleged misconduct.