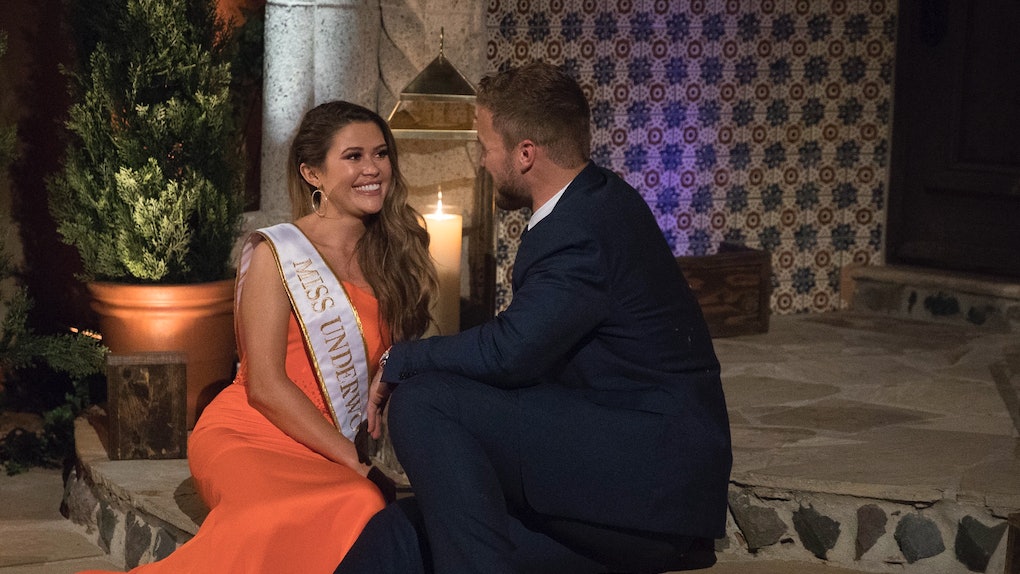 Caelynn's Quotes About Being The Bachelorette Will Make You Question Everything

Someone used to sparkly gowns and a literal crown seems like they would thrive in the spotlight as the Bachelorette, but for Bachelor contestant Caelynn Miller-Keyes, that might not be the case. The beauty queen and Miss USA runner-up was cut from the competition after hometown dates, making a tearful exit that was the typical fare of future Bachelorettes' eventual intro packages. ABC and Bachelor Nation may be painting her in the light of a leading lady, but Caelynn's quotes about being the Bachelorette suggest otherwise. It turns out that other women's speculation about Caelynn wanting to be the Bachelorette may have been totally false.

While touring her Virginia hometown with Bachelor Colton Underwood on Feb. 26's episode, Caelynn brightened at talk of their future together. Like all families suddenly pushed onto national TV, her parents were a little skeptical about the speedy dating process, but Colton still scored a blessing from Caelynn's stepdad. Before the visit was over, Caelynn even told Colton that she was "fully" in love with him. Speaking to the camera, she confessed, "I feel like it's us at the end of this. It feels good to be in love. I'm very happy, very excited."

Of course, the biggest lesson we can always take from The Bachelor is that you should avoid early optimism at all costs.

When Colton later delivered a rose to the uncertain Cassie instead of Caelynn, the former Miss North Carolina was blindsided. "I have never felt like this in a relationship, and I felt like we just had this connection from the start," she told Colton before leaving. "I feel like an idiot."

A heartbroken woman is usually perfect to fill the Bachelorette role, but being out of the Bachelor bubble for now, Caelynn has spoken up about whether she'd take the opportunity. "I think I would be hesitant, just because this process sucked for me," she told Us Weekly. "I mean, it was absolute hell for me."

Caelynn was also quick to shoot down the other women's gossip about her and her close friend Cassie joining The Bachelor with aspirations of Instagram fame and being the franchise's next lead. She told the magazine:

I was like, ‘What, me? These people are saying that I want to be Bachelorette?’ Because that was the furthest thing from my mind because I was in love with Colton. But also because, I mean, there were several days where I would go to producers and be like, ‘I’m leaving, I can’t deal with this.’ Because it was hard, it was emotional. It was so incredibly hard for me.

At the beginning of Season 23, Caelynn quickly emerged as a fan favorite in the pageant-related dispute between her and former friend Hannah B., who grew insecure as Caelynn's popularity with Colton grew. Viewers' love of Caelynn doubled when she shared her experience with sexual assault, but her poor handling of the women's suspicions that she wasn't there for the right reasons didn't sit well with Bachelor Nation.

As one of the final four contestants, Caelynn is definitely a serious Bachelorette contender, but her honesty about her time on The Bachelor might shift the conversation on which woman is best for the job. ABC's final choice will likely be revealed on the season's "After the Final Rose" special. By then we'll have seen how Caelynn reacts to Bachelorette rumors on the always emotional "Women Tell All" episode. Is a bouquet of Bachelorette-approved roses in her future? I don't know what to think now.