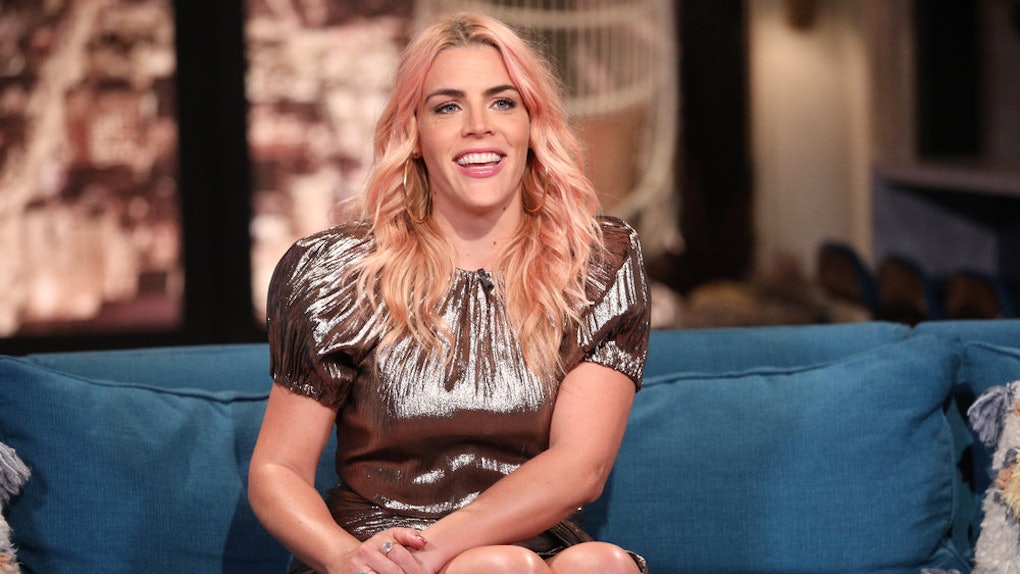 'Busy Tonight' Was Canceled Before Season 2, But There's Still Some Hope

We're blessed to live in a world where we have a plethora of options when it comes to late-night talk shows. You can giggle with Fallon, sing in the car with Corden, and break down politics with Colbert, but over the last few months, viewers could spill all the celebrity tea with Busy Philipps on E!'s Busy Tonight. Sadly, Busy Tonight was canceled instead of earning a second season, but don't mourn just yet. Philipps has assured fans she's looking to bring the show elsewhere.

According to an E! spokesperson, "Busy Tonight last episode for E! will air Thursday, May 16 with a special celebratory half-hour. Busy is a hilarious and charismatic talent and we are grateful to the entire Busy Tonight team who has delivered countless laughs and heartwarming moments in what will be over 100 episodes."

Busy Tonight debuted on Oct. 28, 2018, on E!, marking the rare occasion of a woman hosting a late-night talk show. The internet previously knew Philipps best as an alum of Freaks and Geeks and Dawson's Creek as well as the frequent awards show date of her BFF Michelle Williams. In her hosting position, Philipps would investigate the latest celeb scandals, chat with other stars on her couch, and bid farewell to her viewers with a nightly song. Although they're entertaining, the main networks' late shows are overwhelmingly male, so Philipps' more inclusive insights were always super relatable and fun.

On May 6, Philipps announced on her social media that E! had canceled Busy Tonight after the airing of nearly 100 episodes. "Just wanted to let you know my show Busy Tonight won't be continuing on the E network after May 16," the actress tweeted. "I'm beyond proud of what we've built in such a short period of time and I'm hopeful we can find the right place for the show to live on."

Philipps elaborated on the news in a series of Instagram Stories, saying, "[E!] decided not to pick it up. Look, we’re meeting with people and seeing if there’s another place that makes sense for it to go. Because I would like to continue doing it. We would all like to figure out a way to continue to make it."

Nowadays, a cancellation doesn't always equate to a show disappearing, so Philipps is keeping her options open. She wasn't specific about the outlets she's considering for Busy Tonight's continuation, but Philipps is proud about her achievement regardless of what may happen.

"It’s wild because we’ve only been doing the show for a relatively short period of time," she said in a Story. "In that time, I feel we’ve been able to accomplish so much creatively... I think we’ve had a real point of view. I’m so proud of all of the things we’ve been able to do and I feel the show is really successful in that way but I don’t know what to say."

As for other women in late-night TV, Full Frontal with Samantha Bee airs weekly on TBS, while YouTuber Lilly Singh will helm a new NBC show this fall. Philipps appeared to address this upcoming addition in her Stories, saying, "I hope that you know we can continue to do the show somewhere else. I hope that we figure that out, because it does seem lame that there would be just... one woman in late night at a time."

Here's hoping that Philipps finds another place for her show to go! Until then, I'll be re-watching her celebrity interviews on a loop.

Busy Tonight airs Mondays thru Thursdays at 11 p.m. ET on E!. Its final episode airs on Thursday, May 16.

More like this
This 'Drag Race' Season 13, Episode 14 Clip Shows The Top 4 Getting SO Real
By Lexi Williams
Peter Weber’s Quote About How ‘Bachelor’ Producers Get Contestants To Kiss Is Wild
By Abby Monteil
Colton Underwood Is Reportedly Making A Netflix Show After Coming Out As Gay
By Dylan Kickham
Stay up to date