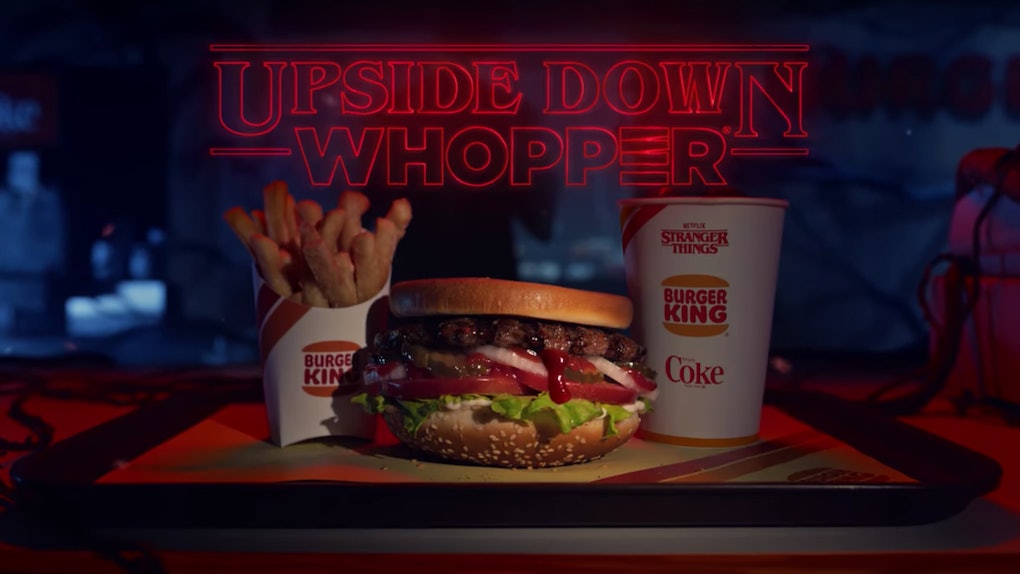 Stranger Things fans might have to wait until July to head back to Hawkins, Indiana, but Burger King is giving customers a sneak preview of the Upside Down with its newest menu item. In addition to limited-edition t-shirts, crowns, ketchup packets, pins, and other prizes inspired by the hit Netflix series, the burger chain is helping viewers count down to Season 3 by turner its Whopper sandwich on its head — quite literally. Forget the Eggos, because I have a feeling that Burger King's Stranger Things-inspired Upside Down Whopper is something that Eleven would happily dig into.

Starting on Friday, June 21, Burger King customers can take their tastebuds on a journey to the Upside Down, thanks to the debut of the Upside Down Whopper sandwich. While I'll admit that anything that's even remotely connected to the series' spooky alternate reality is probably the last thing I'd want to eat, you don't need to worry. The sandwich — which will be sold at select BK locations nationwide — boasts the exact same ingredients as the Whopper sandwich you know and love. The only difference? It's served upside-down and comes with exclusive packaging to help pump you up for the Season 3 premiere on July 4, per a Burger King press release.

If you happen to live in Los Angeles, New York, Chicago, San Francisco, Miami, Houston, Philadelphia, Boston, Dallas, or Boston, I'd keep an eye out for the limited-edition item at what has been dubbed "the 11 restaurants." According to press materials, these locations will also have specialty Stranger Things merch if you really want to get into the spirit of things. If you've ever wanted to rock T-shirts and crowns that pay homage to your favorite characters from the TV show or maybe even dip your French fries in themed ketchup packets, I'd suggest checking to see if your local BK is stocked up.

While nomming on your Upside Down Whopper, the chain is upping the ante on your order by teaming up with Coca-Cola. For a limited-time, customers who order any soft drink will can enter for a chance to instantly win prizes when they can an icon with their Burger King app. Considering that there will be over 100,000 winners chosen daily, there's actually a pretty good chance that you could be walking away with everything from free merchandise and food to $25,000 in cash, airline tickets, and a car. There's even a chance to win a Stranger Things "VIP Experience," which sounds pretty intriguing.

In addition, ordering a "Hopper Meal" (inspired by Chief Hopper, of course) from June 13 through June 20 through DoorDash can come with some perks, according to press materials. Stranger Things stans who order this combo (a Whopper sandwich, a small drink, and small fries) with the code "STRANGER" during this time period will reportedly gain access to exclusive content from Season 3 of the fan-favorite series. I'll admit that I don't really need an excuse to order in delivery, but this is as good of one as any.

Again, the rewards are going to be coming in leading up to the Season 3 premiere on July 4, so I'd take Burger King's advice in this case: You can’t get eaten by something in the Upside Down if you’ve already eaten the Upside Down Whopper.