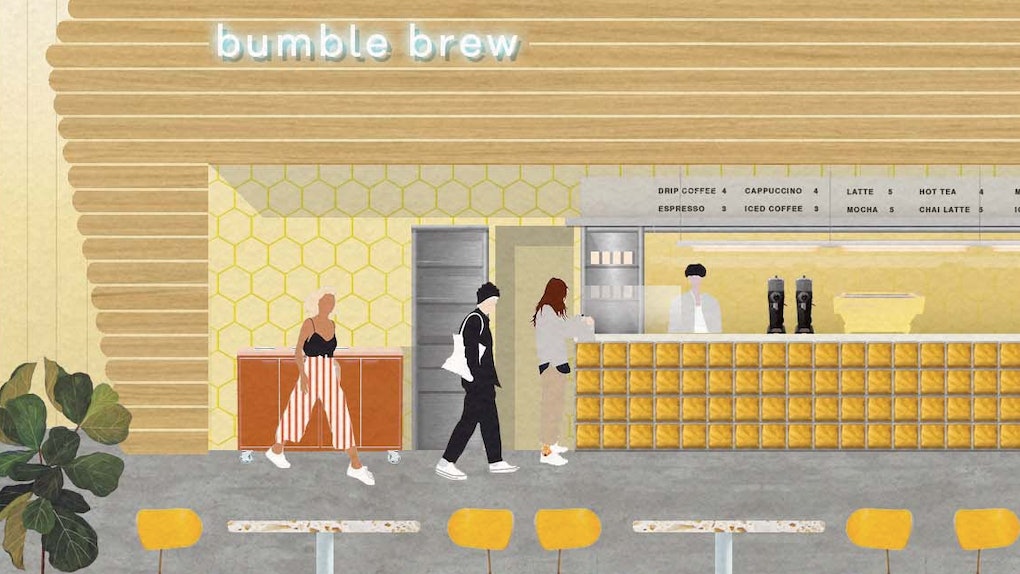 Bumble users, you’ll soon have a new hangout spot in NYC designed with your first dates in mind. Bumble’s new restaurant, Bumble Brew in New York City, is opening in fall 2019 in SoHo, serving coffee drinks by day and wine and small plates by night. It’s a workspace and restaurant in one, making it the ideal spot to meet a date for drinks or coffee — whether they’re a romantic prospect from Bumble Date or a new pal you met on Bumble BFF.

According to Bloomberg, the restaurant will serve a variety of small plates designed to be date-friendly, dishes like cold cut sandwiches, farro salad, and prosciutto plates. “No spaghetti — nothing that would be awkward on a first date,” Bumble’s Chief of Staff, Caroline Ellis Roche, told Bloomberg. Elite Daily reached out to a rep from Bumble about what makes certain foods date-friendly, but the rep declined to comment. Is it safe to assume that there won’t be burritos or tacos? I’m not sure (and TBH, I would crush tacos on a first date any day).

The menu prices for small plates range from $12 to $15, according to Bloomberg, and Bumble is partnering with Delicious Hospitality to source the food and drinks. The space (designed to seat 70 people) will also host events like food demos and networking hours.

While it’s still unclear whether Bumble Brew is designed specifically for Bumble users (the app declined to comment), it’s obviously being created with them in mind. And this is a big step for Bumble, marking the first time the company has opened a permanent social gathering space. In June 2017, the brand opened a pop-up space called the Hive, also in SoHo, where users could meet up and hang out. The Hive has also appeared in NYC, London, Aspen, Vancouver, and Los Angeles. At the pop-ups, users were required to show their Bumble profile for entry. They could then use the space to work, meet matches, socialize, or attend scheduled programming events.

The NYC restaurant will allow Bumble to add a physical presence to its huge online community, potentially encouraging users to spend more time together in person and less time on their phones. According to Bloomberg, Bumble Brew is also unlikely to bring in a huge profit for the company since the prices are modest and the location is not — so the motivation behind the space may be simply to showcase the brand. With a physical space to host events, Bumble can get creative with programming and work to foster brand loyalty among its users.

For Bumble users in NYC, this might feel like exciting news — or maybe the idea of meeting a date at a Bumble-themed establishment feels like too much. Either way, I’m intrigued to learn how Bumble will use the space to foster community and encourage users to meet up and hang out in real life. Chatting up matches is fun, but sometimes it’s refreshing to get out there in person and talk to people who are also looking to make connections. Prosciutto plate and chill, anyone?