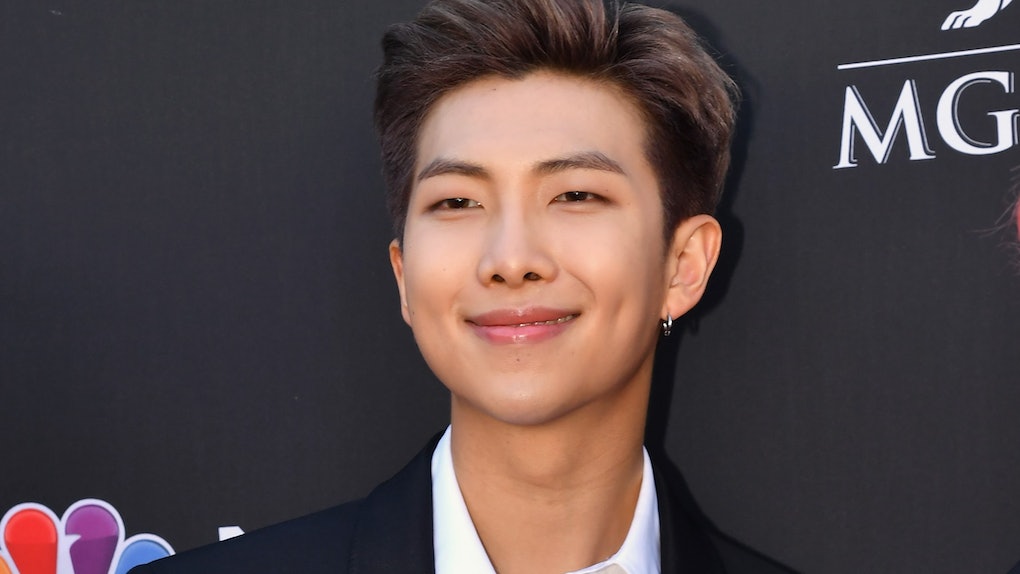 BTS' Tweets For RM's 26th Birthday Are Filled With Excitement

September has been full of festivities for the BTS ARMY. These past few weeks, ARMYs have celebrated BTS winning four VMAs, Jungkook turning 23, and "Dynamite" going No. 1 on the Billboard Hot 100 two weeks in a row. Now, fans are taking the time to honor BTS' leader, RM, for his 26th birthday. ARMYs always pay tribute to the members' big days with hashtags and global fan projects, while the guys mark the occasions with social media posts dedicated to the birthday boy. BTS' tweets for RM's 26th birthday show how much they care for him.

This time of the year is one of the busiest for fans because Jungkook's, RM's, and Jimin's birthdays are so close to each other. This year, fans came up with a fan project this year to celebrate all three guys' birthdays at once. According to entertainment website PinkVilla, a group of Indian BTS fans is raising funds towards the Cuddles Foundation — an organization that helps give food and other support to children battling cancer.

Besides coming up with donations, fans are also celebrating RM's birthday with hashtags like #HappyBirthdayRM and #NamjoonDay. Meanwhile, BTS is recognizing his big day with tweets full of sweet messages. Take a look below.

Jin was the first member to congratulate him with a video shouting, "Happy Birthday, bro!"

J-Hope followed Jin's lead and posted a video message where his face was obscured. In the video, he sleepily says, "Happy birthday, bro. It's your friend J-Hope." He captioned the video, "At dawn, I was looking for a pretty photo of me with you but I ended up falling asleep, Sorry Bro. (Why there were only funny photos?)"

V was next to jump on the obscured-video train, revealing that the boys were kicking of a #RecordYourVoiceOnly challenge in honor of RM's birthday. "Happy Birthday! #RMChallenge #RecordYourVoiceOnly," he wrote. "What's this but why do I want to hear ARMYs' voices even with this (challenge)?" In his voice-only video, he said, "Namjoon-ah, happy birthday, say something! Ok, Thank you!"

RM even wished himself a "happy birthday" by sharing a few selfies.

Right before hitting VLIVE for a birthday celebration, Jimin took to Twitter to send the birthday boy love, writing, "Happy birthday to our Namjoonie! Many blessings and don't get sick."

While Jungkook hasn't posted individually on Twitter yet, it's clear he was already very much part of the in-person birthday festivities, which is way more important than a tweet. With all BTS has accomplished this year, it's a birthday RM won't soon forget.

This article was originally published on Sep. 11, 2020

More like this
Bella Thorne's Quotes About Coming Out As Pansexual Are Filled With Pride – EXCLUSIVE
By Brandy Robidoux
Meghan & Harry's Birthday Gift To The Queen Was Simple, But Thoughtful
By Michele Mendez
Lil Huddy's Instagram For Charli D'Amelio's Birthday Shows An Epic Karaoke Party
By Daffany Chan
Stay up to date