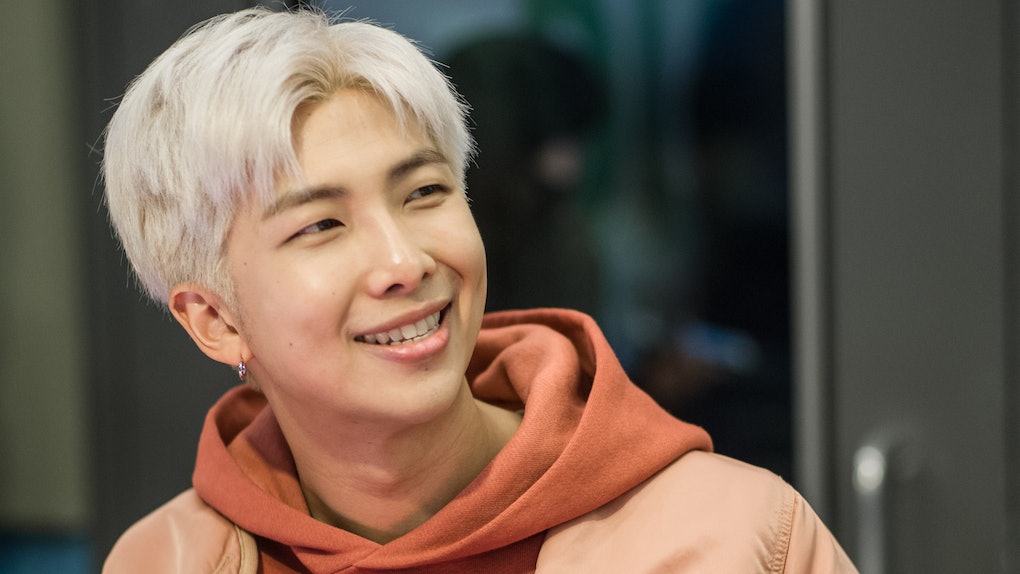 Birthday wishes are in order. Sept. 12 is BTS' RM's birthday! The leader of the K-Pop sensation turned 25 on this lovely day, and the BTS ARMY has been at work celebrating his big day on Twitter since 11 a.m. on Sept. 11 (midnight on Sept. 12 in Korea where RM is currently). Also celebrating RM's birthday are the BTS boys themselves! And BTS' tweets for RM's 25th birthday show how much they care about their group's leader.

The first of the group to tweet about RM's birthday was J-Hope. Posted on the BTS Twitter account, he tweeted a photo of RM looking at his phone and, according to a translation by @JK_Glitters, wrote,

Our Namjoon who’s been staying in my phone steadily, happy birthday. #HAPPYRMDAY Namjoon my light my star. Namjoon is ARMY’s love, person and pride #RMGalaxyDay There are many tags Namjoonah! Power of ARMY. #NamjoonfriendHobi

Shout out to the BTS fans who graciously translate all of BTS' tweets for us non-Korean speakers!

RM also tweeted himself! He posted four photos from what appear to be his birthday celebrations and wrote a simple "Thank you" sandwiched between cake emojis.

Of course, the BTS ARMY is busy sending their loving birthday messages to RM on Twitter as well. They got #HappyBirthdayNamjoon (Namjoon is RM's given name) trending globally on Twitter pretty quickly, tweeting messages like "Happy birthday to our moonchild!" and "Thank you joon for being the best leader and best role model and just best PERSON ever :( we love you" at the BTS leading man.

I hope you're feeling all of this birthday love, RM!

Suga's tweet for RM's birthday was just as sweet as his name.

"Our leader happy birthday*!! #NamjoonahItsYoongiHyung#NamjoonHBD#LeaderNamjoonsHappyHappyBirthday," Suga tweeted, according to a fan translation by @BTStranslation_.

Jimin tweeted a video for his pal.

"Our hyung, happy birthday. Sorry I’m late. Read my text, please #JIMIN," Jimin tweeted, according to a fan's translation by @DoYou_Bangtan. In the video itself, he said this: "Ah hyungnim~ First, I sincerely wish you a happy birthday and I’m so so sorry I couldn’t be with you today. Eat lots and lots of food, happy birthday, and uh, I love hyung a lot!"

And Jin posted a hilarious photo of RM sleeping.

The photo shows RM wearing a Bangtan Bomb costume on his head, his eyes closed (sleeping, apparently), and him cuddling with a cat stuffed animal. A precious lil bean.

"Namjyoonie happy birthday - Seokjin hyung-ah ([I] wished as the first one at about 2 o'clock yesterday)" Jin said in his tweet, according to a fan translation by @BTSTranslation_.

V shared an on-set photo from an episode of RUN! where they're resting on a couch, and wrote, "Congratulations to our brother," according to a fan translation by @btsarmykorean2.

And the maknae, Jungkook, brought up the rear with this photo of RM that seems to have been ran through an aging filter of some sort. "Before the birthday goes <ends/passes by>, happy b'day to my first and last role model hehe," he wrote, according to a translation by @BTSTranslations_.

Clearly, RM is very loved by his bandmates. He's also loved by his fans, who did a huge gesture to show their love for him leading up to his birthday.

The birthday celebrations for RM started a week prior, when hundreds of fans in South Korea reportedly met up to plant a forest in honor of RM. According to Yonhap News Agency, 250 fans of BTS met up at Seoul's Han River Park on Sept. 3 with the intention of planting 1,250 trees. The fans reportedly donated around $10,000 in order to plant the trees. This was all done as a big birthday gift to RM to commemorate his commitment to help protect the environment.

This fan-led effort now has its own Twitter account, where fans check in for updates on the forest, named RM Forest No. 1. (Apparently, they want to plant more!) There is also now a plaque outside the forest that has RM's name on it.