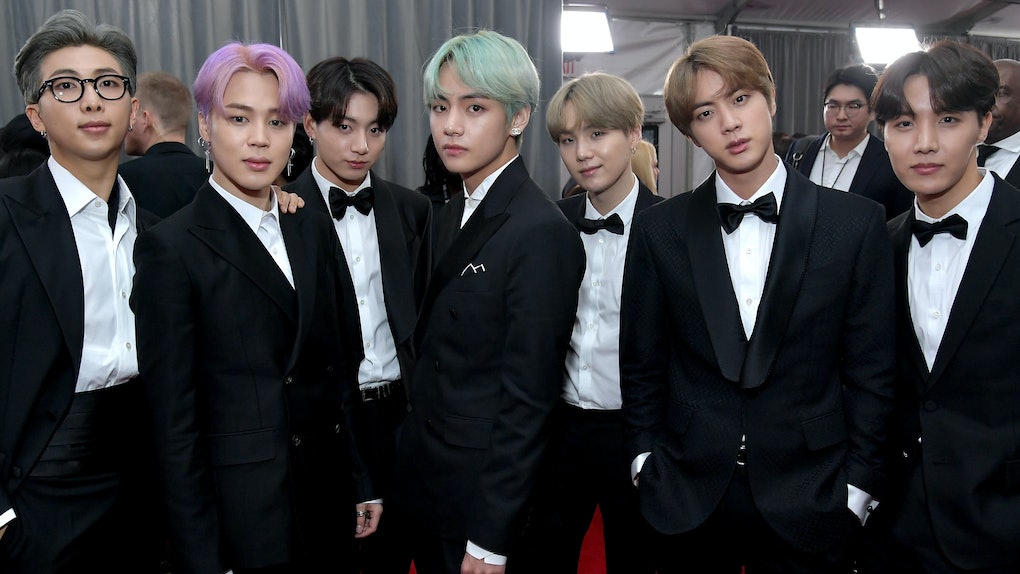 BTS' Tweets For J-Hope's Birthday Are Filled With So Much Hope, Which Is Pretty Fitting

BTS knows how to celebrate each other's birthdays. Whenever it's one of the seven boys' birthdays, the guys go as all out as they can to make sure they feel the love. On Jimin's birthday in October, the boys surprised him with a cake as well as flowers and a sweet note from his father. J-Hope's birthday just passed, and BTS' tweets for J-Hope's birthday are more examples of how much all of these guys love each other.

BTS seriously has the sweetest, most supportive fandom ever. The tweets from BTS fans wishing J-Hope a happy birthday on Feb. 18 are things that I literally would only say about my closest friends and family, so yeah, safe to say BTS fans really love these guys. And they love to show their love for each other, as well.

J-Hope got a fun birthday surprise from the other BTS boys (minus Suga, who had already fallen asleep, LOL) while he was doing a V-Live late on Feb. 17 (KST). The video clocks in at about an hour long. For the first half, J-Hope is by himself bopping around and responding to fans' messages as they commented live on the video. One fan asked how he wants to celebrate his birthday, and he responded, "On my birthday, I want to have dinner with my family and spend my birthday like that."

V pops in to chat with J-Hope and tell him how much he loves him. Then, at about the 34-minute mark in the video (and midnight on Han. 18 KST), the boys pop into J-Hope's room and surprise him with a cake.

Just look at the joy on this guy's face!

All of the boys except Suga are there to sing to J-Hope. Suga had hilariously already fallen asleep before they could all wish their pal a happy birthday and give him his cake (which is understandable considering the boys had just finished their final concert in Fukuoka, Japan). But never fear! They all still had the chance to tell J-HOPE HBD.

Suga tweeted about everyone singing to J-Hope without him.

"Y'all had fun without me on vapp while I was sleeping," he quipped, "Anyways.. happy birthday hob-ah."

Jimin, knowing himself, mentioned in the VLive that while he too took a nap before J-Hope's V-Live, he set an alarm for 11:46 PM so that he didn't miss the festivities. And according to his tweet, he crashed right back to sleep right after.

"I fell asleep right away, so I'm posting this late. Sincerely wishing you a happy birthday hyung," Jimin tweeted with a smiley emoji at the end. His tweet also included some adorable selfies of him and J-Hope.

And then RM tweeted out the ultimate compliment, writing, "My coolest friend jhope, happy happy birthday," along with a bunch of photos of J-Hope looking super cool.

J-Hope also tweeted a big thank you to the BTS Army when the V-Live video was done. The photos showed three selfies and a screenshot of the Twitter trends that were all about J-Hope's birthday.

"Thank you, Army," he tweeted.

BTS fans showed their love for J-Hope on Twitter as well (hence all the trending hashtags).

"Happy birthday J-Hope! I want to thank you for all what you do for Army, for your positive energy, being our light of sun," one fan tweeted. "I wish you power and health to continue your career, everyone wants only your happiness because you are our hope, Mr. J-Hope! ;) #SunshineHobiDay."

"Jung Hoseok aka J-Hope born February 18, 1994 is a rapper, singer, songwriter, dancer, record producer but mostly he is the SUNLIGHT that brings the real Joy & Happiness to many lives including mine," another fan tweeted. "Happy Birthday to YOU."

The messages are seriously more beautiful than anything my friends have ever said to me. And my friends are very loving?? Or, so I thought!

More like this
8 Facts About Lisa Delcampo On 'The Circle,' AKA Lance Bass' Assistant
By Rachel Varina
Here's Why Harry & William Will Not Walk Together At Prince Philip's Funeral
By Brandy Robidoux
When Will BLACKPINK's Lisa Make Her Solo Debut? It May Be Right Around The Corner
By Michele Mendez
Stay up to date