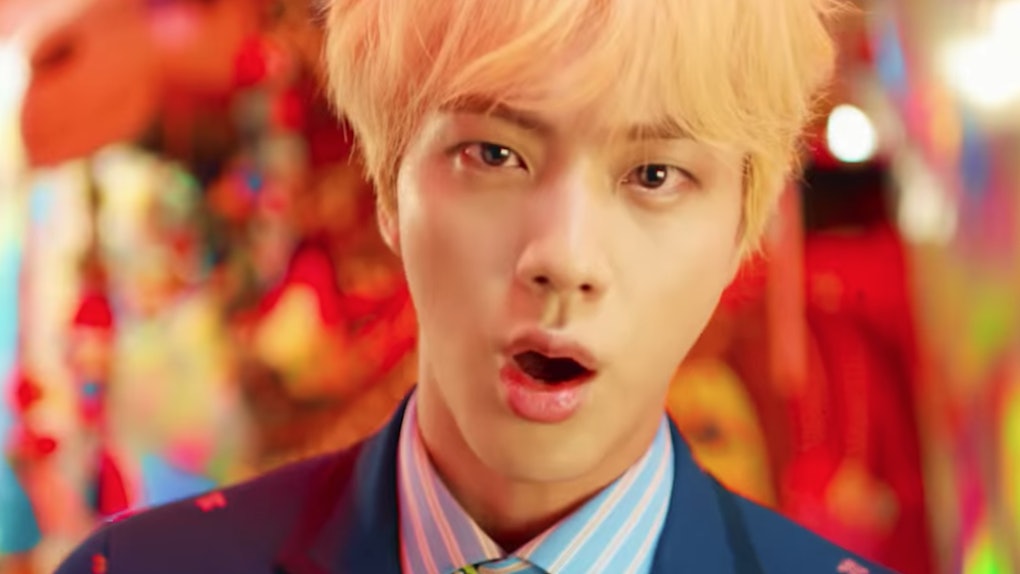 BTS may have debuted as a group in 2013, but they have been together for much longer than that because of all the years they spent training as idols alongside each other at their label, Big Hit Entertainment. Since forming BTS, the guys have obviously gotten really close with each other from spending so much time together. Besides making music and performing, the guys have also shared apartments and gone on vacations together (during their personal time, too). There's really no doubt about it: RM, Jin, Suga, J-Hope, Jimin, V, and Jungkook are family. And, like a family, each member has their own qualities that contributes to the group's overall unique charm. Although the oldest member of the BTS family happens to be Jin (full name: Kim Seokjin), BTS' quotes about Jin show just how much of a kid at heart he really is because of how he is able to lift any BTS members' mood with a simple joke. Yet, at the same time, Jin works hard to make the group as strong as it can be.

Check out BTS' quotes about Jin below.

ON HIS ABILITY TO LIGHTEN THE MOOD:

Jin is known for being the member of the group to always have a joke on hand. Although they're cheesy, that's what makes them so great. Jin's dad jokes never fail to make the BTS members laugh. RM said that his jokes are especially good whenever there is an awkward moment. In a clip for the group's We Love BTS special on Hulu Japan, RM said, "When we're with strangers, if Jin hyung says light jokes, the mood lights up really well. He's really good with ice-breaking."

Apparently, Jin really does have the ability to shift the mood with his jokes. In an interview with Japanese magazine Exile, Jimin said, "He is one of the two members with the trait of being a mood-maker."

In the same special for Hulu Japan, V added, "He heals us and makes us laugh."

ON HIS POSITIVE ENERGY:

The BTS members describe Jin's positive personality as being totally infectious — so much so that he helps give the other members energy when they most need it. With how much they work, they could really use someone in the group to keep the positive vibe going throughout the day. Thankfully, Jin is the perfect man for the job.

Suga added, "Jin hyung has his own energy. He doesn't like a depressing atmosphere, so I think he always brings energy into the team."

Watch Suga compliment Jin near the 5:47 mark below.

ON HOW HARD HE WORKS:

BTS have said it themselves that Jin is the group's secret weapon. In the same Hulu Japan special, RM said, "I admire his constant effort to improve his dance skills."

While Jin may not have as much time in the center of a song's choreography as Jimin or Jungkook usually do, he is just as talented and hard-working as them. Jungkook explained, "Seokjin hyung practices so hard, we can't see that, but hyung always shows the results."

Since Jin is usually in the background for the choreography, he takes time to really observe and notice what is missing so he can work hard to fix it. Jimin said, "If there is something lacking when we're doing our job, he works hard to fill that lacking part. Then I realize he works hard silently for our team and that is very touching to me."

V said Jin works for hours and hours to constantly improve himself. V explained, "He really works hard a lot in the team to make our team's color stand out more. We don't see that up front, but when I hear things in the back, he practices until dawn in the hotel room alone."

That is so true. ARMYs have witnessed this when BTS went on American Hustle Life. Jin practiced overnight until he perfected his choreography and vocals.

In the 2018 summer package, RM predicted, "I think you will be our secret weapon as long as you keep yourself up just like you do now."

You wouldn't know that Jin is the oldest member unless you looked it up because he is such a fun and energetic person to be around. He is the very definition of a kid at heart because he doesn't seem to care about his age at all. In the Hulu Japan special, J-Hope said, "Jin hyung is oldest in our team, but I think that doesn't matter to him at all."

In fact, because he's always fooling around with Jungkook, the youngest member, you would think they could the same age!

ON HOW CARING HE IS:

Jin's big brother instinct still comes through, as the BTS members appreciate him for being so caring and protective of them. In the Hulu Japan special, V said, "He might have a weaker inner side, but what he shows to us members is very strong and [he] takes care of us one by one."

Jimin has noticed that Jin is always looking out for the members. In an interview with Japanese magazine Exile, Jimin said, "The eldest, Jin, has always been taking care of us so I want to [say] thank you to him a lot. I’m not sure to describe it exactly but, he is similar to J-Hope when it comes to worrying about the members."

Jimin also thinks that Jin is the glue that holds BTS together. In the Hulu Japan special, he said, "I think he's the most on hoping that all members stay together."

J-Hope added, "I think he plays the most important role of maintaining the team together. I think he gives us strength."

It's so nice to hear the BTS members praise Jin, as he clearly has a very important role in the group. Without him, BTS wouldn't be the same, so thank you, Jin!

More like this
The Best Movie Soundtracks Were So Good, They'll Live On Forever
By Brandy Robidoux
These Songs About Loving Yourself Need To Be On Your Playlist
By Michele Mendez
Mark Tuan's Quotes About His Solo Career Tease Endless Potential For The Future – EXCLUSIVE
By Michele Mendez
Stay up to date