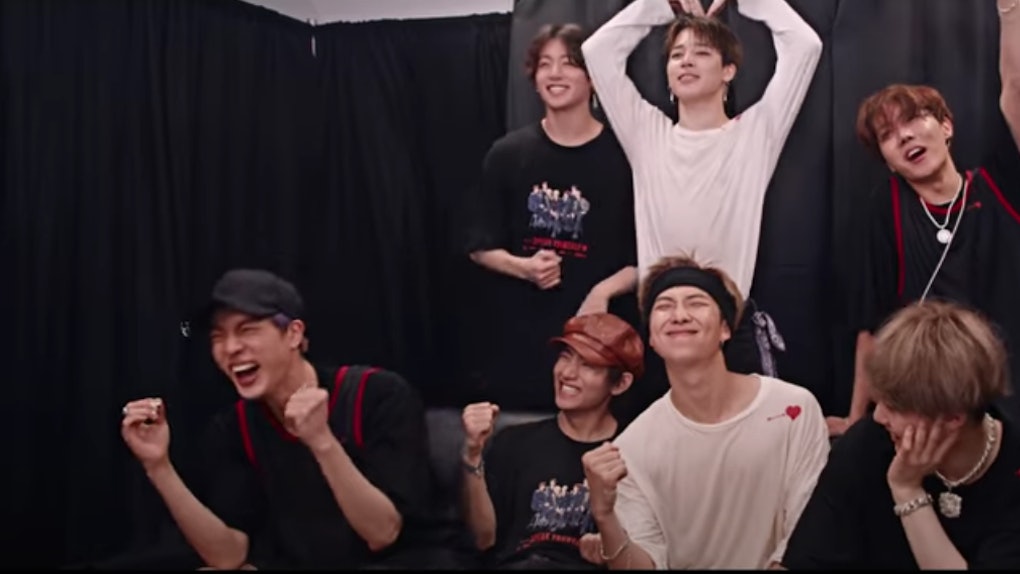 BTS' 'Break The Silence: The Movie' Trailer Will Bring You To Tears In 30 Seconds

The BTS boys are coming to a theater near you. Yep, the K-Pop band is, once again, hitting the big screen, and the first look at their new movie will get fans so hype. Before you grab the popcorn, you might want to grab some tissues as well, because BTS' Break The Silence: The Movie trailer is an emotional ride.

Break The Silence: The Movie marks BTS' fourth film, and it's slated to hit theaters worldwide beginning Sept. 10. ARMYs in the United States will have to wait slightly longer, with the movie coming their way Sept. 24.

As excited as fans are about the film's release, the BTS team is equally so. In a statement, the CEO of Trafalgar Releasing (the film's distributor) was thrilled about the boys' latest concert tour movie installment, saying,

We're delighted to partner with Big Hit Entertainment on the release of BREAK THE SILENCE: THE MOVIE, which gives fans extraordinary access to both their first international stadium tour and all seven members of BTS. We look forward to welcoming the ARMY back to cinemas for a fourth time for this must-see BTS big screen experience.

The trailer shows glimpses of the bandmates as they travel the globe on their 2019 Love Yourself: Speak Yourself tour, and it's guaranteed to give any die-hard ARMY chills. You can see the trailer for BTS' Break The Silence: The Movie below.

The forthcoming film is actually the sequel to their last release Bring the Soul: The Movie. Released in August 2019, the documentary followed the band through the final concert of their worldwide Love Yourself tour, as the boys reminisced about the experience during a rooftop dinner in Paris, sharing their journey of performing on stages across the world. In Break The Silence, fans will get to see the boys open up about the final leg of the Love Yourself tour, Speak Yourself -- including their momentous final performances in South Korea.

Judging from the trailer, with Break The Silence, the guys got more personal than ever with their latest film.

Can't wait to see Jin, Suga, J-Hope, RM, Jimin, V, and Jungkook hit the big screen? Tickets for Break the Silence are on sale now on the film's official website.

More like this
What Is Coco Jones From 'Let It Shine' Up To In 2021? She's Doing It All
By Sydney N. Sweeney
Is Olivia Rodrigo's "Good 4 U" About Joshua Bassett? Fans Are Convinced
By Michele Mendez
Here's How To Stream The 2021 Lotte Duty Free Concert, & Catch BTS & TWICE's Performances
By Michele Mendez
Stay up to date