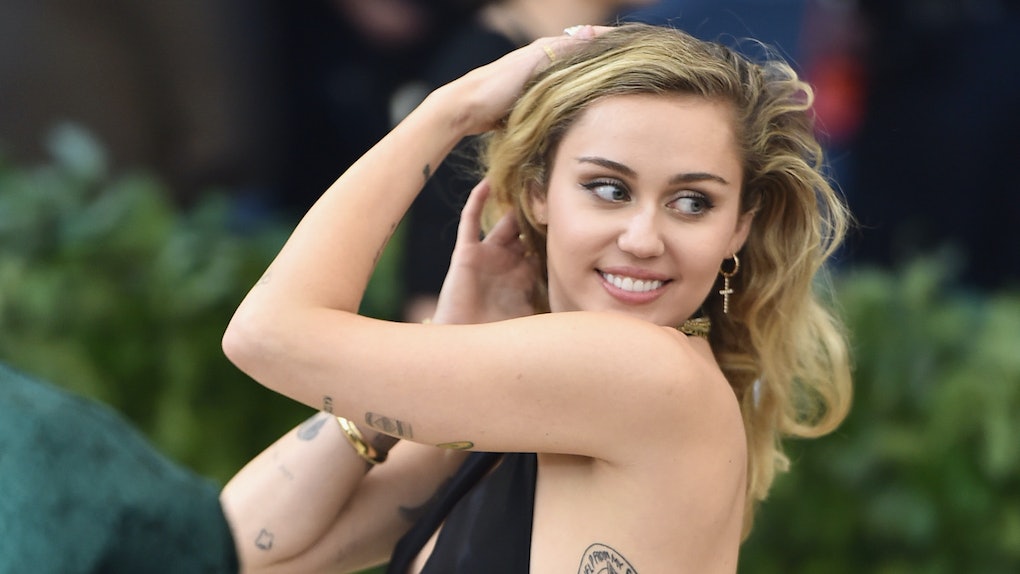 'Black Mirror' Season 5 Might Star Miley Cyrus, According To A New Rumor

Miley Cyrus' next TV role may be a far cry from Hannah Montana. Rumors are flying that the singer may appear in the upcoming season of Netflix's technological horror series Black Mirror. Yep — Black Mirror Season 5 might star Miley Cyrus, according to new reports.

So far, there are no confirmed reports that Miley Cyrus is starring in Black Mirror's upcoming fifth season, but a South African news site called IOL recently reported that Cyrus has been spotted around Cape Town, and the site claimed that she was there to film for Black Mirror. Since Season 5 of Black Mirror is reportedly set to be released some time in December, according to Bloomberg, Cyrus could be making her big return to television in about a month.

If Miley Cyrus is part of the new season of Black Mirror, she would be the latest in a group of famous actors to have taken roles on the anthology series. Past standalone episodes have starred major names like Jon Hamm, Bryce Dallas Howard, Jesse Plemons, Daniel Kaluuya, and Hayley Atwell. It would also be one of Cyrus' few recent TV roles. The singer's best known acting role is still her Disney Channel series Hannah Montana, which he starred in from 2006 to 2011. Since then, Cyrus has focused more on her music career, becoming one of pop music's biggest names today. Cyrus returned to acting in 2016 as the lead in Woody Allen's short-lived Amazon series Crisis in Six Scenes.

Show creator Charlie Brooker confirmed back in March that the new season of Black Mirror had just begun filming, but not every episode had been written yet. That seems to add up with Miley Cyrus possibly filming for the series in recent weeks. Of course, nobody has any idea about the role that Cyrus could potentially be playing if she is in Season 5 of Black Mirror. The series famously treats each of its episodes like standalone mini-movies, so Cyrus could be playing anything. Brooker has also kept totally tight-lipped on what Season 5 might have in store for fans.

One thing that we do know about the new season, though, is that it will include an interactive, choose-your-own-adventure style episode. Netflix recently revealed that it would being experimenting in interactive technology for some of its upcoming TV shows and specials, starting with one episode in the fifth season of Black Mirror. Basically, that means that in one of the new episodes, viewers will actually get to control how the story unfolds by making decisions live on their TVs or computers. This will reportedly only apply to one of the new episodes, though, so it may not be the one that Miley Cyrus is reportedly starring in.

Black Mirror's fourth season dropped on Netflix on Dec. 29, 2017, consisting of six episodes. The final episode of that season, "Black Museum," felt a bit like a series finale since it uncharacteristically included multiple callbacks to past episodes, so some fans may have been surprised to learn the series would be back for a Season 5. Look for Season 5 of Black Mirror to debut on Netflix at some point this December.