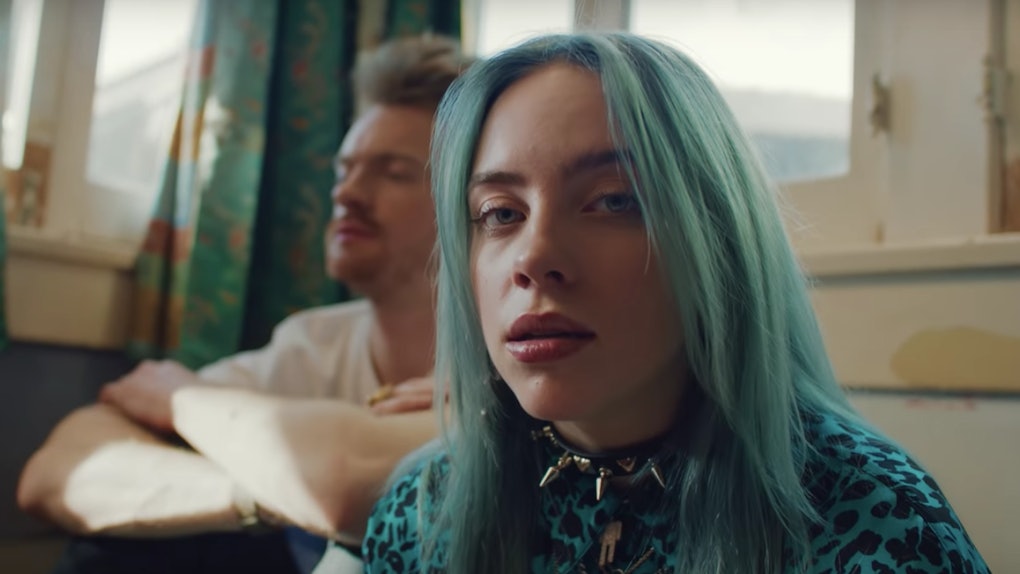 Raise your hand if you ever got dumped or had to go through a messy breakup. Oh look, the entire universe is raising its hand! Of course, the feeling of heartbreak is one that many people know all too well — including 17-year-old singer Billie Eilish. But instead of bottling up that crummy emotion, Eilish decided to create an emotionally impactful song called, "Wish You Were Gay." In her new song, she expresses her sorrow for her unrequited feelings when it comes to her crush, and while the title may have you scratching your head wondering what she means, Billie Eilish's "Wish You Were Gay" lyrics actually make a ton of sense.

On Monday, March 4, Eilish dropped her newest single, and it has everything to do with someone who simply doesn't have any interest in dating her (been there, done that, amirite?). But instead of wishing that her crush magically develops feelings for her, she sings that she wishes that he won't have any feelings for any woman, aka, she wishes he were gay. Kind of an interesting twist to the plain old crooning love songs, no?

So without further adieu, let's have a go at the "Wish You Were Gay" lyrics. The song starts out like this:

Baby, I don't feel so good, Six words you never understood, "I'll never let you go," five words you'll never say (Aww), I laugh alone like nothing's wrong, Four days has never felt so long, If three's a crowd and two was us, one slipped away (Hahahahahahahaha)

Then, the chorus goes:

I just wanna make you feel okay, But all you do is look the other way, I can't tell you how much I wish I didn't wanna stay, I just kinda wish you were gay

Then the song starts back up again, with the lyrics:

Is there a reason we're not through? Is there a 12 step just for you? Our conversation's all in blue 11 "heys" (Hey, hey, hey, hey), Ten fingers tearing out my hair, Nine times you never made it there, I ate alone at 7, you were six minutes away (Yay)

Then the chorus comes back:

How am I supposed to make you feel okay, When all you do is walk the other way? I can't tell you how much I wish I didn't wanna stay I just kinda wish you were gay

To spare my pride, To give your lack of interest an explanation, Don't say I'm not your type, Just say that I'm not your preferred sexual orientation, I'm so selfish, But you make me feel helpless, yeah, And I can't stand another day, Stand another day

Relatable, is it not?

"Wish You Were Gay" is Eilish's newest single off of her debut full-length album, When We All Fall Asleep, Where Do We Go? The album is set to drop on March 29, so I'm currently counting down the weeks. And, in a video released with the song, Eilish revealed that the idea behind the track is a sort of coping mechanism for her, to alleviate the possibility that the other person simply isn't interested in her. "I wish you were gay to spare my pride," Eilish said regarding the song’s lyrics. "To give your lack of interest in me an explanation."

I feel this on a spiritual level.

You can watch Eilish's explanation about her song below, where she breaks down, line by line, her very clever and witty lyrics:

And, as part of her new campaign for the single, Eilish announced in a press release that the 48 hours following the song's release, all of the proceeds from her BLOHSH apparel line will be donated to The Trevor Project, which, according to its website, is the world’s largest suicide and crisis prevention program for at-risk LGBTQ youth, meaning you can rock out and do good.

So remember, the next time your love life just isn't working out for you, just blast some Billie, and everything will be just a little bit better.