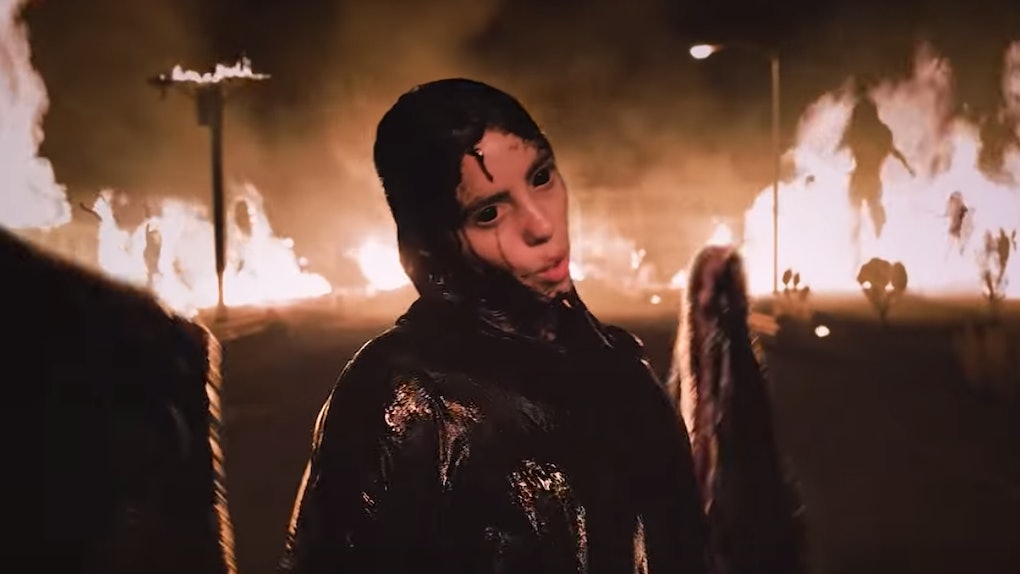 In true Billie Eilish style, the singer's new music video is weird and creepy AF! Like, syringes, cracking bones, huge, ghastly wings (that so aren't Victoria's-Secret-type wings). Like I said, creepy AF! However, Billie Eilish's "All The Good Girls Go To Hell" music video is a total must-see. But, you might have to watch between the gaps in between your fingers. Don't say I didn't warn ya'.

On Sept. 4, Eilish dropped the terrifyingly cool visual for her track "All The Good Girls Go To Hell." It begins with Eilish being injected in the back with tons of syringes. The formula causes her to sprout gloriously large wings that appear almost angel-like, but a split-second later, Eilish falls from the all-white room through the cloud-filled blue sky (which I'm going to liken to a "fall from grace"), and crashes into a tar pit on Earth, which is basically hell because it's on fire. Eilish struggles to get out of the pit before emerging wide-eyed and covered in the thick, black substance as the song starts with the familiar line, "My Lucifer is lonely."

Eilish stumbles through fire and smoke, straining to see what is in front of her as she inches toward the camera. Eventually, the trail of tar behind her catches fire, igniting her feathers. It's honestly a spooky, yet stunning sight to see as Eilish spreads her wings while they are ablaze.

In the background, gigantic female figures dance in the middle of the flames. I know, it is a lot, but as eerie as the Rich Lee-directed, Drive Studios-produced music video may be, it is a perfectly dark visual of the hellish lyrics that seem to talk about man's inability to act right.

Look at you needing me / You know I'm not your friend without some greenery / Walk in wearing fetters / Peter should know better / Your cover up is caving in / Man is such a fool / Why are we saving him? / Poisoning themselves now / Begging for our help, wow! / Hills burn in California ' My turn to ignore ya / Don't say I didn't warn ya / All the good girls go to hell' / Cause even God herself has enemies

Whoa, seriously profound stuff and it seems that Eilish is seizing this moment to urge us all to do a little more good in the world. Turns out, the video is actually a call to action. In the description box, Eilish encourages her 19.3 million subscribers to wake up and protect Mother Earth.

The description of the video reads: "A note from Billie: right now there are millions of people all over the world begging our leaders to pay attention. our earth is warming up at an unprecedented rate, icecaps are melting, our oceans are rising, our wildlife is being poisoned and our forests are burning. on september 23rd, the UN will host the 2019 Climate Action Summit to discuss how to tackle these issues. the clock is ticking. on friday september 20th and friday september 27th you can make your voice be heard. take it to the streets. #climatestrikehttps://globalclimatestrike.net"

Wow, I can't help but stan an eco-conscious artist. I'm totally here for this video and its message, even if it gives me nightmares.