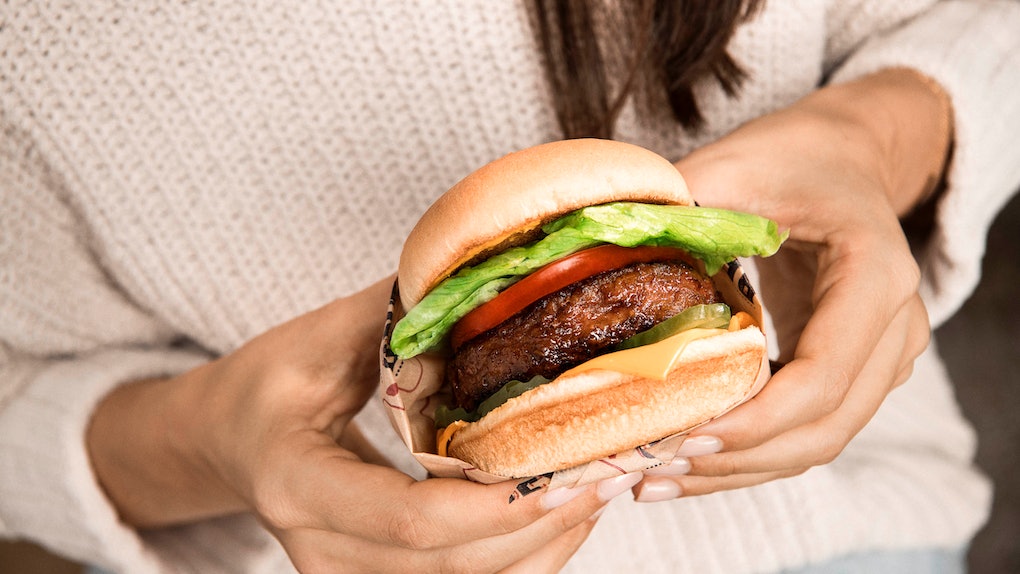 Summer is coming up quick, and that means barbecue season is in full swing (yum). If you're someone who eats meat on the reg, then you're probably stoked about it. But if you're a vegetarian who's on the lookout for plant-based BBQ options, I know exactly what you should check out. Beyond Meat's upgraded plant-based burger is coming, and it'll be perfect for those summertime grill sessions. If you've tried Beyond Meat's products in the past, then you can probably imagine how delicious this new product is going to be. If you haven't, though, let me give you the DL.

Beyond Meat is a company that creates plant-based meats including burgers, sausages, and "beef crumbles." Even though its products don't contain meat, they do contain protein, all thanks to their plant-derived ingredients. (Not to mention, they look exactly like the real thing.) Anyway, one popular Beyond Meat product is The Beyond Burger, which "looks, cooks, and satisfies like beef," according to the company's website.

OK, now that you're all caught up, I can tell you about the company's latest news (because it involves that burger). According to CNN, Beyond Meat is releasing a new version of its beloved patty — and apparently, it's more realistic than ever.

Side note: I think the burger that's pictured above looks identical to a meat patty. However, the company's upcoming burgers look even more like the real thing, per CNN. Apparently, they cook like real burgers do, too.

How is that even possible, you ask? Well, it all has to do with the burger's new ingredients. Unlike Beyond Meat's previous patties, the company's upgraded burgers use apple extract to help 'em turn brown while they cook, according to CNN. Apparently, Beyond Meat also added cocoa butter and coconut oil to the recipe to create a meat-like "marbling effect," per the publication. Between those new ingredients, there's no doubt in my mind that I'd mistake The Beyond Burger for a meat-filled patty.

Now, let's discuss protein (because that's a pretty important aspect about burgers — meat or no meat). According to CNN, Beyond Meat's new burger patties include rice protein, mung bean, and peas, which is apparently different from the OG recipe.

I don't know about you, but I'm getting hungry just thinking about Beyond Meat's new plant-based burgers. If you are, too, then you might be wondering when (and where) you can buy them. According to CNN, the upgraded burgers will hit the shelves this week, so start your shopping lists and get ready for those barbecues.

If you're not sure which grocery stores are selling the goods near you, don't fret. Beyond Meat's website makes it super easy to locate a retailer that's selling the plant-based meats. In order to find a store, head to the company's Products page and choose which option you're craving. Then, hit the "Find Near You" button. After doing that, you'll be able to enter your location at the top of the screen and see which stores in your area are selling Beyond Meat products.

Whether you opt for plant-based burgers or meat-filled patties, have a great barbecue season.