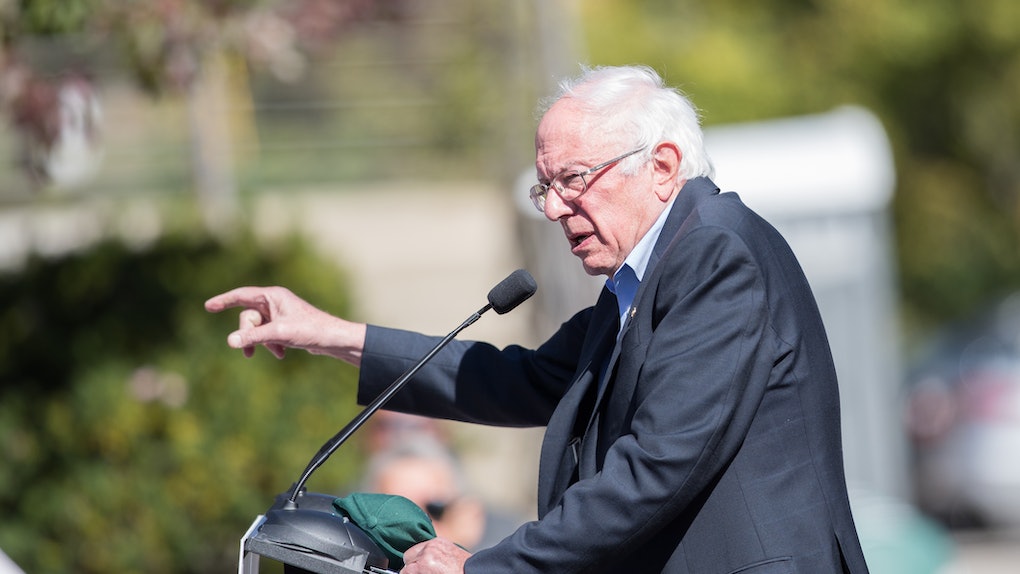 Well, this is a new and upsetting update in the Democratic presidential field. Sen. Bernie Sanders underwent emergency heart surgery on Oct. 1 and has canceled his campaign events until his recovery, according to CNBC. If you were planning on attending a Bernie rally in the near future, maybe put those plans on hold.

According to a statement shared with Elite Daily on Oct. 2 from Sanders campaign Senior Advisor Jeff Weaver, the Vermont senator was attending an event on Tuesday, Oct. 1, when he "experienced some chest discomfort." Medical testing found a blockage in one artery and doctors inserted two stents, a type of medical tube that keeps arteries open. But for all the Sanders stans out there, don't start worrying yet. Per the statement, the senator is "conversing and in good spirits," so it seems like he's doing well after his surgery scare. However, don't expect to see him back on the campaign trail just yet. Also per the statement, the Democratic candidate has canceled his events and appearances "until further notice."

"He will be resting up over the next few days," the statement said. "We are canceling his events and appearances until further notice, and we will continue to provide appropriate updates."

At 78 years old, Sanders is the oldest of all the Democratic contenders, but not by all that much. Vice President Joe Biden is a sprightly 76, while Massachusetts Sen. Elizabeth Warren is 70. Their potential Republican opponent, President Donald Trump, is 73. He was the oldest-ever first term president when he was inaugurated at age 70 back in 2017.

However, age seems to be nothing but a number given the way some of these candidates bound from campaign event to campaign event. Per the Bernie Sanders verified Facebook page, the senator had no less than eight events and appearances scheduled between Oct. 2 and 4, the three days after his surgery. And I get tired when I double-book parties on a Saturday night.

Reassuringly, although Sanders appears to be doing well, the internet is still rallying to support him. Across social media, many people — both political supporters and opposers — shared "get well soon" messages.

Sanders, an independent who also ran for president on the Democratic ticket back in 2016 but lost the nomination to Hillary Clinton, has been one of the Democratic frontrunners in the lead up to 2020. As of the week of Sept. 22, Sanders was polling third among Democrats, behind Warren and Biden, according to Politico. Since the 2016 election, he's maintained a base of supporters who love his progressive takes on issues like climate change and the Green New Deal, access to affordable college, and universal health care.

But however much he talks about the U.S. health care system, I don't think anyone wanted him to have to test it out in an emergency like this. Get well soon, senator. The campaign trail is sure to be much less interesting without you.