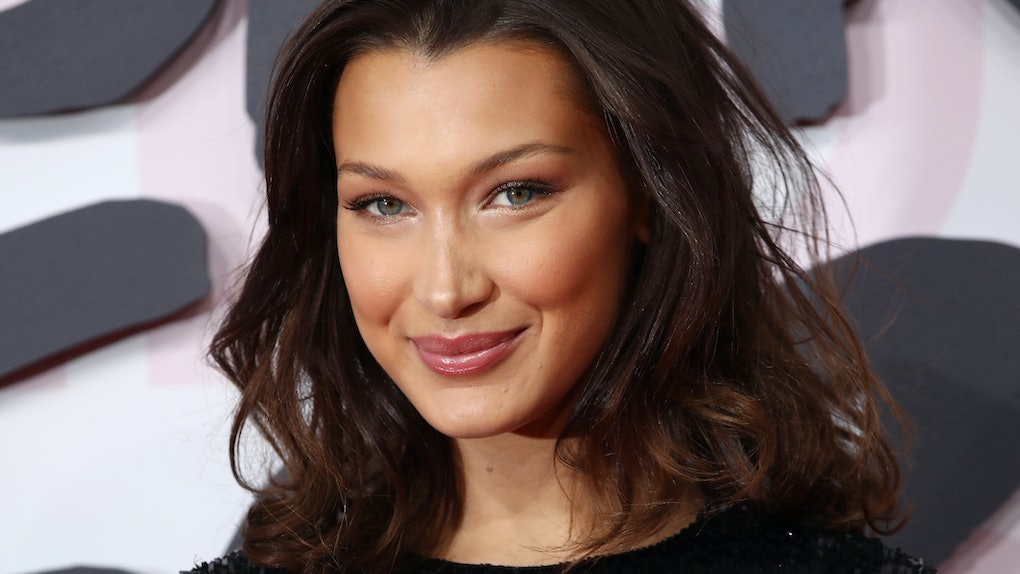 Bella Hadid is not here for your criticism of her appearance, especially if you’re pedaling rumors that she’s had plastic surgery. The 21-year-old model has faced criticism from haters who believe she's gone under the knife to enhance her looks, but Hadid wants the world to know that her reality is completely the opposite. In a new interview with InStyle, Hadid got real about all things beauty, including Bella Hadid’s response to plastic surgery rumors. What she had to say about all of it is just so perfect.

Hadid explained to InStyle why she won’t even think about plastic surgery at this stage of her life:

People think I got all this surgery or did this or that. And you know what? We can do a scan of my face, darling. I’m scared of putting fillers into my lips. I wouldn’t want to mess up my face.

And there you have it, people! Hadid is all about going au naturel and she looks amazing just as she is.

To keep the haters at bay and her self-confidence in check, Hadid chooses to ditch her phone and remind herself who truly has her back:

I turn my phone off and remember that the people around me are the only ones whose opinions I care about … I’ve learned that people are going to hate you and that there’s nothing you can do about it except be yourself and love yourself.

Wow, that must be a tough spot to be in, especially when people unfairly judge you without knowing you.

At least Hadid is grounded by her loved ones and has a positive attitude in spite of all the hate she gets. But that doesn’t mean she’s completely unaffected by all of it:

But I feel people’s energy very intensely. Often I think, ‘I just want to meet you and tell you I’m not a bad person. You don’t have to be mean to me.’

So true! A little kindness and understanding go a long way. And it looks like Hadid learned this the hard way. The model was apparently the victim of bullying as a teen. When asked by InStyle whether she’s ever felt inadequate, Hadid responded like this:

Yes. I had a small waist and big hips and was kind of chubby. I love them now, but I was always self-conscious of my hips—whereas my sister had a six-pack and was very athletic. And I thought I had such a weird face. I remember very distinctly getting bullied because of my features.

I imagine it must have taken Hadid a while to learn self-love and recognize her own strengths. And thank goodness she did because look at the career she has now!

In addition to dismissing plastic surgery rumors and asserting her self-confidence, Hadid also took the opportunity to talk about beauty. Apparently, she took cues from her mom, Yolanda.

Hadid’s father, however, wasn’t terribly enthusiastic about Bella and her sister Gigi (also a supermodel) getting dolled up — mostly when it came to wearing makeup:

I learned about beauty from my mom, though mostly in terms of skin care. She’s always said that good skin is so much more important than the stuff you put on top of it … My dad, meanwhile, never wanted us to wear makeup, so we didn’t. I rode horses, and my sister played volleyball. In my family, it wasn’t about how you looked; it was about how you competed.

A dose of healthy competition isn’t a bad thing. And look how it turned out for Hadid and her sister. They’re so successful now and they support each other 100 percent, so maybe all that competition did them some good after all.

All in all, it seems like Hadid has a really great head on her shoulders. She knows who she is, where she comes from, and where she’s going. So, all negative plastic surgery rumors aside, I’m sure she’ll be just fine!