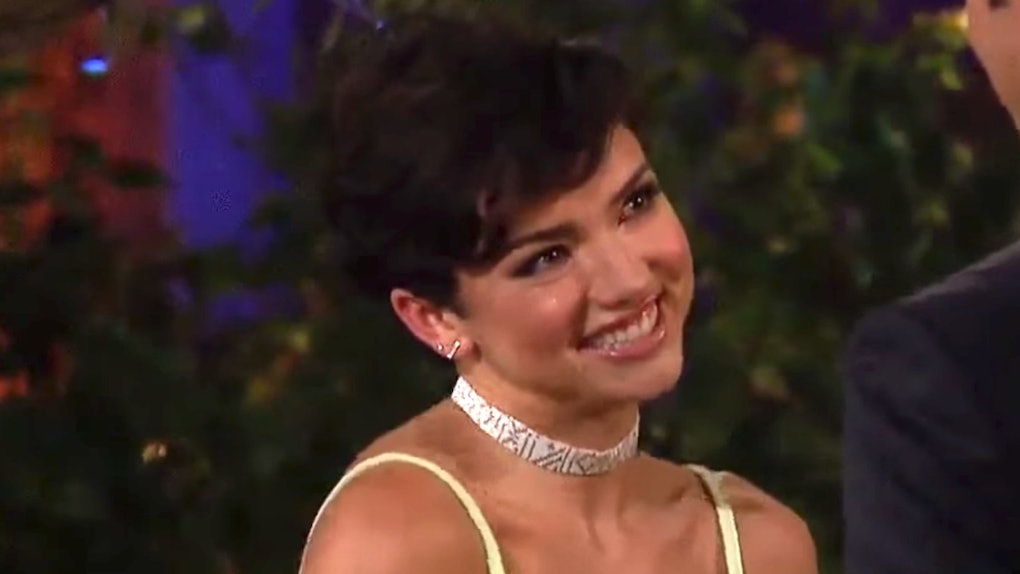 Twenty-two-year-old contestant Bekah M. was cut from Season 22 of The Bachelor this week, and count me in among the minority that is still confused about why everyone loves her. Regardless of my personal views of her, America was further captivated by her when Bachelor fans discovered Bekah had been on a missing persons list in California. Now with her fate sealed on The Bachelor, Bekah's missing person report was finally explained during the L.A. nanny's appearance on Jimmy Kimmel Live!.

Arie chose to eliminate Bekah on this week's episode after Tia told him that she believed the younger woman lacked relationship experience. Bekah then confessed that she missed home and, after Tia's accusations that she wasn't ready for a serious commitment, went crying to Arie in a way that was not unlike a little girl who fell off her bike and ran to her dad.

I like to think that Kimmel's views on The Bachelor speak for all of us who just don't get Bachelor Nation's obsessions with certain contestants. While he didn't exactly say he was a fan of Bekah, the host only mentioned that she was his wife's favorite contestant ever (why?), so I'm taking that as a sign that Kimmel is only incredulously intrigued by Bekah.

Before kicking off his interview with her, he also focused in on Bekah's reenactment of the infamous Lauren Conrad mascara tear on The Hills. This was my favorite moment of Bekah's all season, TBH.

So, the moment Kimmel began his conversation with Bekah, I had so many questions. Why does it look like Bekah is in a slightly dilapidated conference room? What is she wearing on her ears? Why is she taking this interview so seriously?

Kimmel also brought up Tia ratting out Bekah to Arie and asked if she had spoken to her since. Bekah's reply was, "Against my will," and the studio audience was silent. Was that supposed to be funny? Does she actually have big beef with Tia? Your witty Twitter humor doesn't work on live TV, Bekah!

After taking a jab at Bekah's unusual earrings, Kimmel segued into the story of Bekah landing on a missing person list after leaving to work on a marijuana farm following her Bachelor elimination in November 2017. Bekah explained:

All right, let me set the record straight. First of all, a lot of people think I lied to my mother saying I was on a farm when I was actually on The Bachelor. But no, I'd already been eliminated from the show and I just decided to go up to the mountains with some friends for a couple weeks and I was there for six or seven days without phone service, which I thought I was going to have phone service and I told my mother that I would. And, you know, I just had this weird feeling on like the sixth or seventh day, I was like, 'I need to go home now.' So I got in my car, drove to where I had service, called my parents, and then, yeah, come to find out that only 12 hours before, my mother had called the Humboldt sheriff's department saying that I was missing... to set the record straight, I'm not a weed farmer, I am still a nanny in L.A, but yes, my friends have a weed farm up in Humboldt County.

Anyone else catch that major eye roll she gave when Kimmel kept joking about the weed farm? Like, "Daaaaad, let me live my life!" That being said, I think we can all relate to our parents freaking out when they haven't heard from us in a while. We probably can't commiserate with Bekah over mothers reporting your absence to the sheriff, but it's all the same.

It turns out that Bekah was pulling a Wizard of Oz and was behind a curtain in the studio for the whole interview. She may have cleared up the missing person report for us in a funny way, but I'm still so confused about Bekah as a person. That being said, I would be down to see her on Bachelor in Paradise, as long as she lets her mom know where she's going first.

The Bachelor airs on Mondays at 8 p.m. ET on ABC.