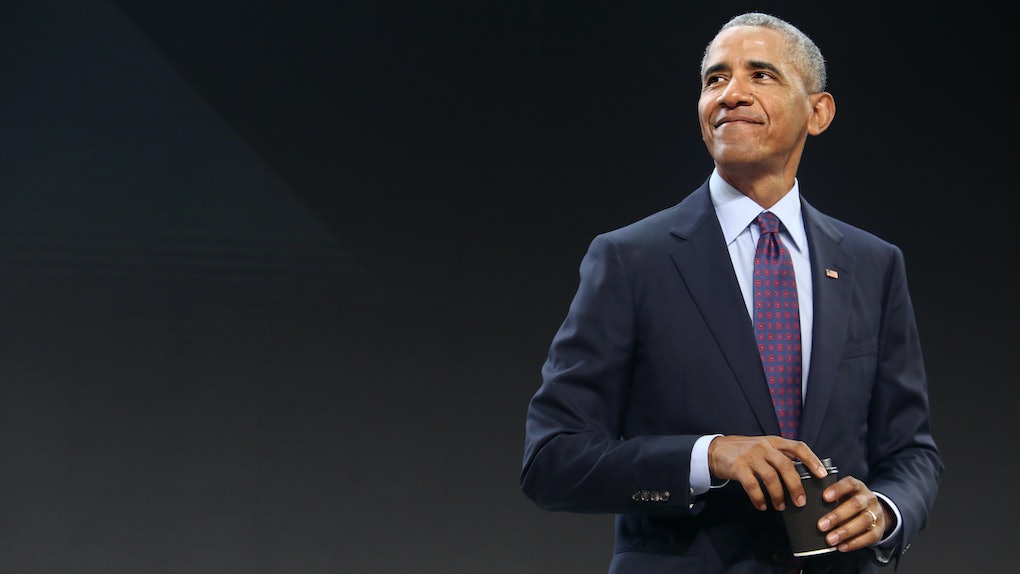 It's no secret that former President Barack Obama has a way with words. Throughout his eight years in the White House, the American people experienced his intelligent eloquence as he delivered countless speeches to the public. Now, you can gain some insight as to where it all started because Barack Obama's love letters from when he was in college have been made public.

According to NPR, Emory University in Atlanta, Georgia has released excerpts of nine letters that Obama wrote to his then-girlfriend Alexandra McNear. You can go to Emory University's Stuart A. Rose Manuscript, Archives, and Rare Book Library on Friday, Oct. 20 to see them on display. Don't worry, though, these letters aren't filled with steamy romance-novel-type stuff that will have you cursing McNear's name, because Michelle Obama is clearly his one, true love.

The contents of the letters, which were written between September of 1982 and August of 1984, are filled with introspective and thought-provoking passages. According to the Emory University website, a young Obama met McNear when he enrolled at Occidental College in Los Angeles in 1979. They grew close, and then Obama transferred to Columbia University in New York for his junior year in 1981.

The first letter is dated Sept. 26, 1982, when he began his senior year at Columbia. Right away, you can tell that Obama was invested in his education, but he was not opposed to questioning himself and his studies. He addressed the challenge of dealing with the realities that face a senior in college when he wrote, "it gets harder and harder to swim against the channels of specialization, as the course levels increase."

He went on to talk of his enjoyment of a physics course that allowed him to somewhat escape the analyzation of human nature, which was a common occurrence for the political science major, but, he added, "Of course, the fact that the knowledge I absorb in the class facilitates nuclear war prevents a clean break."

Many college students can probably relate to Obama's struggle to utilize every aspect of his college education. He continued to talk about his struggle to find his place as he wrote:

Caught without a class, a structure, or a tradition to support me, in a sense the choice to take a different path is made for me.

He suggested his manner of moving forward with his situation when he wrote:

The only way to assuage my feelings of isolation are to absorb all the traditions, classes, make them mine, me theirs. Taken separately, they're unacceptable and untenable.

His writing suggests that he wholly threw himself into his college experience in order to make it his own, and his letters to McNear appear to be a big part of his discovery.

He ended the first letter with a heartfelt admittance of loving feelings toward McNear:

I trust you know that I miss you, that my concern for you is as wide as the air, my confidence in you as deep as the sea, my love rich and plentiful.

His words were likely comforting to McNear as their back-and-forth focused on their respective journeys of self-discovery.

His second letter penned on Nov. 20, 1982, contains a passage more specifically relating to their relationship. He wrote about a how the challenge of a relationship "lies in forging a unity, mixing it up, constructing the truth to be found between the seams of individual lives. All of which requires breaking some sweat. Like a good basketball game. Or a fine dance. Or making love."

Seriously, Obama has some smooth moves. His words are thoughtful and filled with imagery, and he ended the letter with, "We will talk long and deep, Alex, and see what we can make of this."

OK, so you obviously know that it ends as nothing more than a friendship, but man, the guy can really make you swoon.

The remaining seven letters see the pair settle for friendship, all while figuring out who they are meant to be in this world.

Obama wrote on April 27, 1983 (his graduation year) about relating to himself and others:

I enter a pact with other people, other forces in the world, that their problems are mine and mine are theirs. … The minute others imprint my senses, they become me and I must deal with them or else close part of myself off and make myself and the world smaller, lukewarm.

These are not small issues that Obama grappled with, and reading these words now, you can see that even at a young age, Obama had the sensibilities of a public servant.

His final letters detailed his transition from school to work life, and his struggles are that of which many college students can probably relate. As he lived in New York post-grad, he wrote:

One week I can't pay postage to mail a resume and writing sample, the next I have to bounce a check to rent a typewriter

It's clear toward the end of his letters in that Obama had settled for friendship when he wrote to McNeal on Sept. 1, 1983:

"I am not so naïve as to believe that a distinct line exists between romantic love and the more quotidian, but perhaps finer bonds of friendship, but I can feel the progression from one to the other (in my mind).

Honestly, I didn't know what to expect from Barack Obama's love letters, but after just a few sentences, you can tell that they contain thoughtful observations about the world and about the progression of his life and relationships. Give them a read; I don't think Michelle will mind.