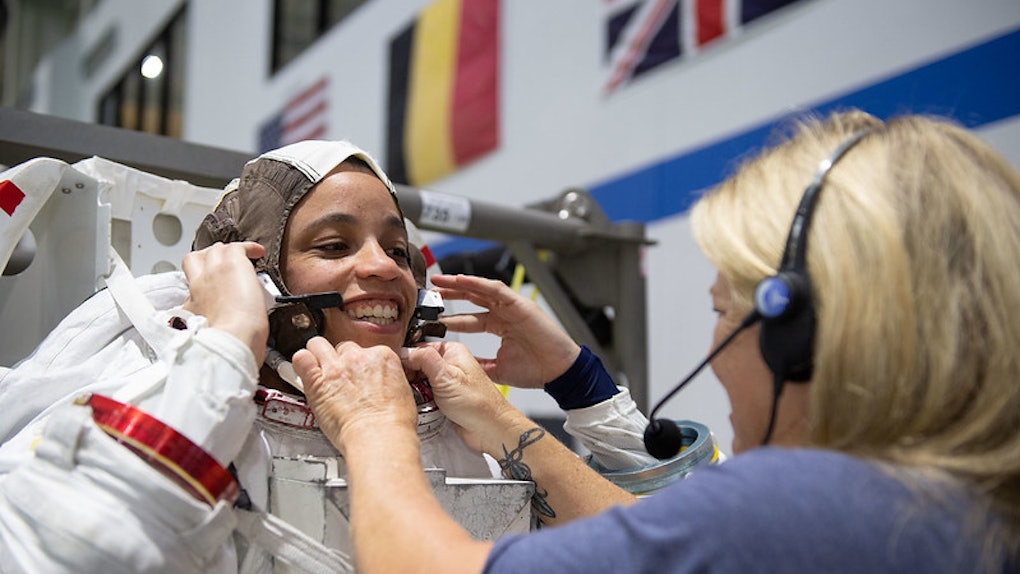 Flying jets, practicing spacewalks in 40-feet-deep pools, polishing up some Russian skills, and studying planetary geology are all in a day’s work for astronaut Jessica Watkins. Watkins, 31, graduated in January 2020 as part of the 2017 NASA Astronaut Candidate class, making her only the sixth black woman to join this elite group. While every kid dreams of becoming an astronaut, only a few manage it — and now, Watkins is one of them.

After completing two years of training in NASA’s rigorous program, from which she graduated on Jan. 10, 2020, Watkins is one of 49 active U.S. astronauts, as well as one of the 13 astronauts (including two Canadian Space Agency astronauts) who graduated in Group 22, aka the Turtles. Although she just graduated this year, Watkins' goal of becoming an astronaut has been a long time coming. Like many people, Watkins caught astronaut fever at a young age — around 8 or 9 years old. “It kind of just never went away. It was always a far-off dream of mine,” she tells Elite Daily. When NASA started accepting astronaut applications in 2015, Watkins knew she had to shoot her shot. “And I decided to put my name in the hat with absolutely no expectations,” Watkins says. “[I’m] just so lucky to be sitting here.”

More than 18,300 people applied to be a 2017 Astronaut Candidate, which is about three times the number of people who applied for candidacy in 2012 and the largest number of people to ever apply. According to a spokesperson for NASA, the space agency’s requirements for 2017 astronaut candidates were U.S. citizenship, a bachelor’s degree in a STEM field, and three years of relevant experiences. Applicants also went through medical and psychological testing “designed to ensure that those selected would eventually make good crew-mates on long-duration space flights.”

It's a tough cut. Out of the thousands who apply, an average of only about 22 people per pool get selected to be candidates. Watkins says finding out she made the 2017 cut was “just [a] real shock, honestly. But [I] was super excited about the opportunities ahead and getting to be a part of such an amazing group.”

One of Watkins’ most memorable days of training was when she finally got to don her spacesuit, a get-up that NASA calls “a one-person spacecraft.” The suit's components are designed to be mix-and-match to create the perfect fit: NASA engineers take 80 body measurements — including torso, elbow, waist, knees, and hands — and come up with the astronaut’s composite. Watkins says it felt like an honor to be able to put the spacesuit on. “It was also the first day getting an introduction into how challenging maneuvering in the suit can be, but also how rewarding it can be as well,” she says.

“Challenging but rewarding” seems to be a big mood for being an astronaut. Every day of training was different, Watkins says. She had to learn how to fly jets and speak Russian. (If you’re going to space, the International Space Station included, you’ll fly out of Russian territory, since the Russian-made Soyuz spacecrafts are the only ones that can carry people into space orbit). Watkins and the Turtles also studied robotics, learned the International Space Station Systems, and ran through trial spacewalks in NASA’s giant Neutral Buoyancy Lab pool. They also collectively learned about geology, as well as water and wilderness survival tactics.

Before Watkins even graduated astronaut training, most of this schooling got put to use in a single, distinct experience: The NEEMO Mission. Short for NASA Extreme Environment Mission Operations, NEEMO brings scientists to work in the world’s only undersea research station, Florida International University’s Aquarius. There, 60 feet beneath the ocean’s surface and 3.5 miles off the east coast of Key Largo, Florida, Watkins and three other crew members lived and worked underwater for nine days. In Aquarius, they tested their new skills and new technology — as well as their ability to live in close quarters without major interpersonal issues.

“NEEMO was absolutely awesome. That was a once-in-a-lifetime opportunity that I’m so grateful I got to be a part of,” Watkins says, recalling her week and a half underwater. “We did lots of science and technology experiments inside the habitat, as well as outside. We did what we call EVAs, or extravehicular activities, each day, which involved scuba diving out into the coral reef nearby and doing scientific research on the sponges out there.”

Apart from testing upcoming tech slated for the International Space Station this year and living in a simulation for the Lunar Gateway (a science lab that will orbit the moon starting in 2022), one of Watkins’ favorite parts of NEEMO was actually just hanging out with her crewmates. Underwater, in space, or anywhere else, some people just wouldn’t be able to survive nine days in tight-knit quarters with their co-workers, which speaks to some underrated qualities of astronaut candidates. “Being able to work with your peers — particularly in a small, confined space, like a spacecraft or international space station — and being able to work effectively together are really important,” Watkins notes.

“The Turtles, we all have very diverse backgrounds and experiences. We have military pilots. We have doctors, engineers, scientists — all kinds of professions,” Watkins explains. The Turtles are the first class to graduate under NASA’s Artemis Program, which seeks to put the first woman on the moon by 2024. Along with Watkins as the sixth black woman astronaut, the Turtles also includes the first Iranian-American astronaut, Jasmin Moghbeli. “There certainly is not one single path way toward becoming an astronaut,” Watkins continues. “But the one thing we do have in common is a good, solid set of team skills."

It's just another piece of all the training Watkins has. In 2010, she got her bachelor’s degree in geological and environmental sciences at Stanford University, while also interning at NASA’s Ames Research Center in Mountain View, California. Her research there explored ways to simulate Mars’ soil, and supported the Phoenix Mars Lander mission. Watkins then attended University of California, Los Angeles from 2010 to 2015. In her grad student years, she interned with NASA again, this time at the Jet Propulsion Laboratory at the California Institute of Technology. Along with studying near-earth asteroids, she helped with prep for the Curiosity and Mars 2020 missions. Her hustle went even further when she completed her doctorate degree in geology at UCLA in 2015.

It’s worth noting that accomplishments like Watkins’ can be extra difficult when the current system is built for women of color — particularly black women — to fail. The latest data from the National Science Board’s Science & Engineering Indicators report shows that schools with high black and Latino enrollment consistently have less access to STEM classes like Algebra II, Calculus, Chemistry, and Physics. While some gaps have been closed over the past decade and a half, racial disparities in students’ math and science achievements start as early as middle school and elementary school, according to the same report.

Likewise, as of 2015, women accounted for half of the United States' college-educated workforce but only held 28% of science and engineering jobs, according to the National Science Board. The numbers get even slimmer when you consider the intersection of race and gender. According to the latest data from the National Center for Education Statistics, only 2.9% of bachelor’s degrees in a STEM field were awarded to black women (including U.S. citizens and non-citizens) from 2015 to 2016. That same year, only 1.67% of STEM-field master’s degrees were awarded to black women, and only 1.24% of STEM-field doctorate degrees were attained by black women.

Only five black women before Watkins have become astronauts: Mae Jemison in 1987, Joan Higginbotham in 1987, Stephanie Wilson in 1992, Yvonne Cagle in 1996, and Jeanette Epps in 2009. Watkins looks at them as inspiration. “If that [small group] has affected my perception at all or my goals at all," she says, "it just stresses the importance of being a good role model, as much as I am capable of doing.”

Watkins suggests girls and women who want to carve out a career in STEM figure out what makes them feel the way she does about geology and space. “My advice would be to find something that you love to do — find your passion — and pursue it relentlessly,” she says. Watkins is proof that the results can be out of this world. “Every day, get up and put your best foot forward,” she says. “And eventually, those footsteps will lead toward the path that lands you where you’d like to be.”