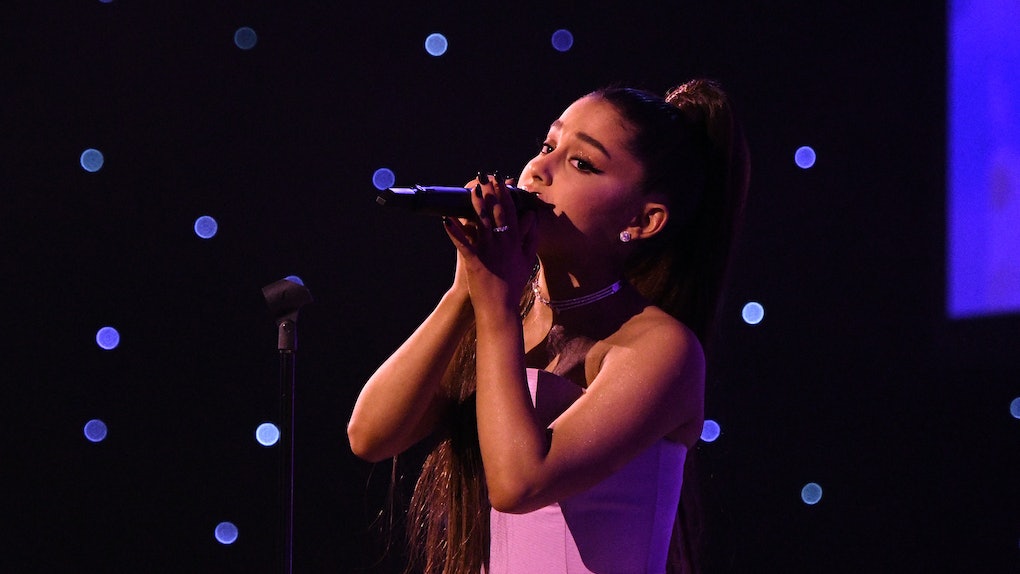 Ariana Grande is a total boss, in case you didn't know. The pop star kicked off her Sweetener world tour on March 18 with a five-act performance at the Times Union Center in Albany that featured a 29-song setlist and lots of cool visuals. And while it's been fun to scroll through all the pictures and videos shared by concert-going Arianators on social media, tour photographers have reportedly been getting a pretty raw deal thanks to Ari's bold new attempt to control her image. Ariana Grande's Sweetener tour photo policy has concert photogs freaking out — but the "No Tears Left To Cry" singer reportedly DGAF.

So what's in this new policy that's upsetting tour photographers so much, anyway? Well, the National Press Photographers Association (NPPA) shared a copy of the standard terms and conditions on their website. And TBH, the agreement — which NPPA is urging its members to refuse to sign — is actually super strict!

It basically requires photographers to hand over all rights to their photos to Grande's tour company, GrandAriTour, Inc. It also prohibits the use of flash, and dictates that photogs are only allowed to take still shots from a designated area (not the pit) during the first three songs.

Oh, and if the photographers want to use their pics, they have to then get written approval from Grande. And even then, they can only use each photo once as part of a news story.

Not surprisingly, several major news outlets — including the Associated Press, New York Times, Los Angeles Times and 12 others — have joined the NPPA in protesting the new Sweetener World Tour press photographer policy, calling it a "surprising and very troubling over-reach by Ms. Grande."

"As a creative artist herself, we cannot understand how Ms. Grande and her representatives could demand such terms and conditions in exchange for permission to photograph her performance," the NPPA's general counsel wrote in a letter to GrandAriTour, Inc. on behalf of the 15 press groups and media organizations. "While we understand your desire to maintain control over your client’s persona and intellectual property, we hope that you will appreciate our position. We encourage your company and Ms. Grande to create an agreement that better recognizes and values the work of visual artists with the same respect we assume she has for the rights of musicians and the worth of their songs." Elite Daily reached out to Grande's team for comment on the NPAA's stance, but did not hear back in time for publication.

Grande's camp reportedly has a different view and thinks the new policy is needed.

"Ariana's new concert photo policy stems from years of being exploited by a number of photo agencies that would often shoot photos of her in concert... and then turn around to use those to make a profit," sources connected to Grande reportedly told TMZ. "Ariana would perform, photogs would take as many pics of her as they wanted... and then, shortly after, merch she didn't approve of would hit the streets with those photos emblazoned on the items. AG never saw a dime from any of it."

Still, according to the TMZ report, it was only a few bad apples that were actually committing this bad behavior. So this reported new policy does kind of suck for the photographers that were playing fair.

Look, I get that these organizations are frustrated by the new policy, because it is pretty audacious. But it looks like Ari is sticking by it, and it's her show, her rules. So if you don't like it, don’t sign it, and don't shoot it.

More like this
These Tweets Comparing Billie Eilish's 'Happier Than Ever' & Ariana Grande's 'Sweetener' Covers Are A Lot
By Sydney N. Sweeney
BTS' Group Teaser Photo For "Butter" Is So Smooth
By Abby Monteil
Olivia Rodrigo's Quote Defending Writing Songs About Boys Calls Out Sexist Remarks
By Cianna Garrison
Stay up to date