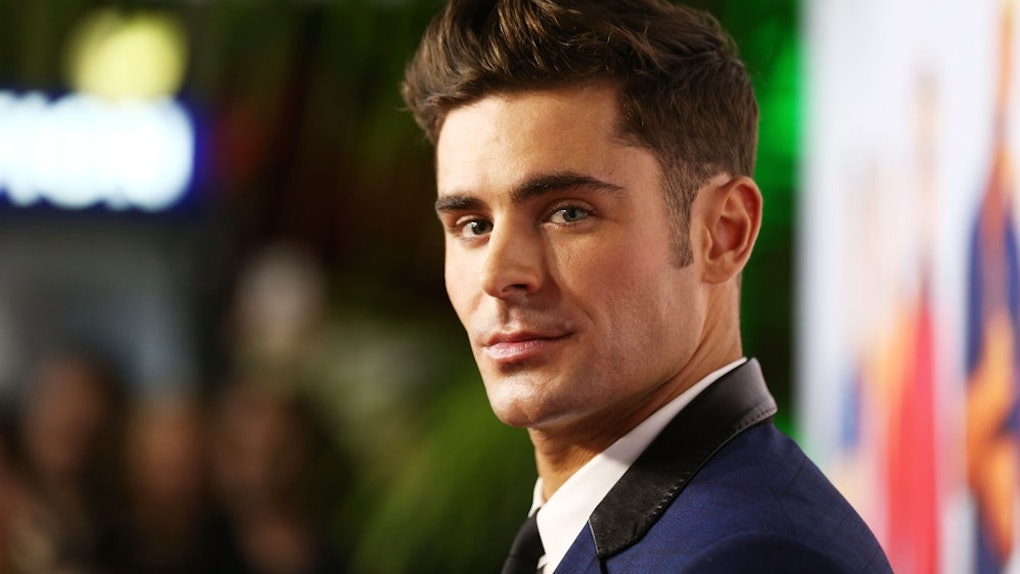 Are Zac Efron & Alexandra Daddario Dating? They've Been Seeing Each Other "On & Off"

Many of us have had our eyes on Zac Efron since his High School Musical days way, way back. Aside from the fact that he's absurdly gorgeous, he also seems really down to earth, which is why some of us have held onto a sliver of hope that we would somehow cross paths with him one day and he'd completely fall head-over-heels for us and then we'd ride off into the sunset and live happily-ever-after. I hate to rain on your (and my) parade, but he's been spotted hanging out with another woman, which has all of us asking one universal question: Are Zac Efron and Alexandra Daddario dating?

A source told People that the former Baywatch costars have been seeing each other “on and off since their time working together on the movie last year, but they are not officially dating." The rumors have swirled for months, but came to a head again on Wednesday, March 28 after the two were seen out shopping for their dogs at a pet store in Los Angeles. And, to make your teenage heart wilt even more (as if a romantic, doggy date wasn't enough), the publication added that the actor even helped her load up her car after their shopping spree. Eyewitnesses reportedly claimed that the two were "enjoying themselves, laughing while sitting in traffic in Daddario's white Ford explorer," according to Elle.

Though sources insist that the two aren't officially together, it definitely doesn't seem that way.

On March 16, Efron wished Daddario happy birthday by sharing a picture of the two together, totally looking like a couple: The High School Musical alum had his arms wrapped around the actress, and she was shown sitting on his lap with her head resting slightly atop his. The caption of his post read, “Happy birthday to one of the the most real, down to [Earth], stunning, intelligent, creative, loving, and most rare Pokémon ever created #alexdaddario.”

"Stunning," "loving," and "most rare Pokémon ever created" is relationship verbiage. IDC, IDC.

All jokes aside, while there's no debate in the fact that these two definitely have chemistry on and off-screen, in May 2017, Daddario maintained that the two were nothing more than costars and "good friends." She told E! News, “We work together closely; he’s my love interest in the film. I understand why people would go crazy over something like that, but Zac and I are very good friends.”

Maybe they're really not together, or they could be trying to take things slow.

Previously, Efron was in a nearly two-year relationship with model Sami Miro that reportedly ended in 2016 after the spark in their romance fizzled out. An insider told E! News that "distance and work schedules got in the way with their relationship and Zac wanted to focus on his career." And even though it was Efron who wanted to go separate ways, it "wasn't an easy breakup."

Following their separation, Efron told The Times that dating is difficult for him and something that he'll "never be able to do." He explained,

Dating is something I'll never be able to do. As in the dictionary definition of dating, because one way or another I've impacted that person's life and they'll soon realize it. A date has to be very long to dispel whatever people think about me.

Who knows whether or not there's more to this romance than what they're telling us, but I definitely don't blame him for wanting to take his time with things. Or maybe he's just giving us time to process this news before dropping the bomb. See, I knew he was a gentleman.