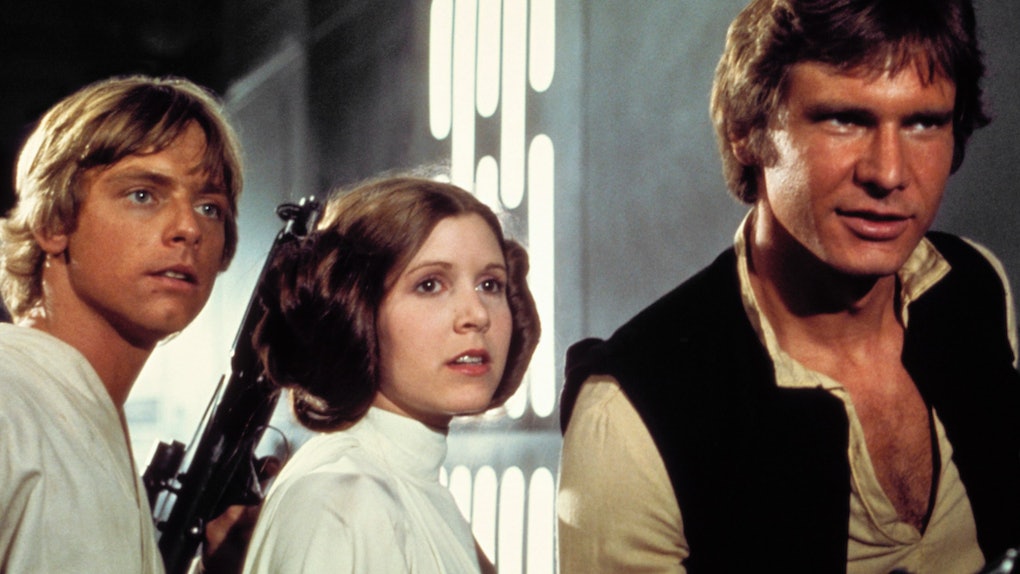 Are The 'Star Wars' Movies On Netflix? How To Catch Up On The Epic Series

Star Wars is a story that is being passed down through the generations. For those in Generation X who were young when the first Star Wars trilogies arrived, this is the time when their children are that age, and they begin to pass on the story. For those born in the Millennium, now is the time to sit our cousins and nieces and nephews down and teach them, too. And the holidays are a perfect moment to do so. But how do we stream the original trilogies of films? Are the Star Wars movies on Netflix?

In a word, no. And it's for the same reason that you haven't seen a new box set of the original Star Wars films released since the early part of this decade, despite the fact that the franchise is undergoing the ultimate rebirth. In short, the rights to the Star Wars films are almost as big a mess as the right to the Marvel comics characters.

Let's rewind back to 2012 and the day that the Grand Bargain announcement dropped. Disney was buying out Lucasfilm, a brand that had basically gone dormant since the prequel trilogy heaved it's final flop out of theaters. Yes, there was a small revival in the cartoon sector, with Star Wars: The Clone Wars, but mostly the series seemed to have ground to a halt.

Disney paid $4 billion for the rights to the franchise and for the rights to attempt a revival and the use of the canon characters within the universe, all of them, in movies going forward. The novels, the comics, that all-important merchandising, all of that came with.

What that $4 billion price tag didn't include was anything theatrical that came before 2012. The rights to the first six movies, which were still selling at a pretty decent clip, were all owned by 20th Century FOX, the original production company that released them. They had no interest in giving that revenue up before the rights expired in 2020 and reverted back to Lucasfilm. By the way, that 2020 expiration doesn't even include all six movies. It's just the prequels and Episodes V & VI. In order to get that original Star Wars movie made, Lucas had to sign a contract that gave 20th Century FOX the rights to that film in perpetuity. Lucasfilm and Disney will never get it back.*

(*That is, unless that deal for Disney to buy out 20th Century FOX goes through next week. If so, not only will the MCU get the right to The X-Men back, but Lucasfilm will get all almost all their Star Wars movies in one place.)

Almost all, that is, except for The Clone Wars cartoons. Those were all done with Warner Brothers. The TV cartoon was part of the deal to go to Disney. But the movie that spawned it was not. (It happens to be on Netflix streaming right now, but that's completely not related to anything.)

So, if the Star Wars film rights are all scattered, how can a fan stream all the movies to binge watch ahead of The Last Jedi? The answer, it turns out, is TNT.

Last year, Lucasfilm managed to get 20th Century FOX and Disney to sit down together and make a long term deal to give the streaming/airing on cable rights for Star Wars to Turner's broadcasting networks. It's what called a "second run" deal. Once the movies have finished their "first run" exclusive streaming rights wherever they were sold, they will then default to TNT for their second, longer term run. The Force Awakens' first streaming run won't end until 2018, so it's still on STARZ right now. Rogue One won't finish on Netflix until 2019. But eventually, everything will be found on TNT.

Until then, here's how to stream all the Star Wars movies ahead of The Last Jedi's release, assuming you are watching in chronological order.

More like this
10 Rainy Day Movies To Watch On Netflix That Are Perfect To Pass The Time
By Kristen Perrone and Lexi Williams
Is Netflix Making A 'To All The Boys' Spinoff Series About Kitty? Here's The Tea
By Rachel Varina
'Selena: The Series' Part 2: Netflix Release Date, Trailer, Cast, & More News
By Dylan Kickham
Stay up to date