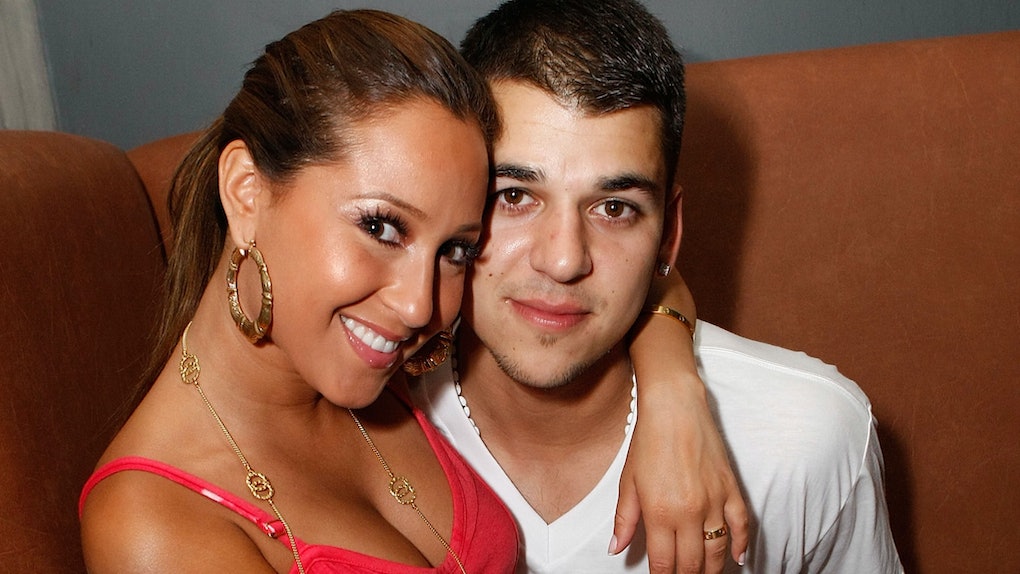 Maintaining a relationship in the spotlight is no easy feat, and many celebrity romances don't stand the test of time. That being said, some stars manage to remain friends following a breakup, supporting each other's successes platonically. Since splitting in 2009, Rob Kardashian and Adrienne Bailon have formed very separate lives, and are both seemingly happy since moving on. But for those wondering if Rob Kardashian and Adrienne Bailon are still friends, here's the tea.

Kardashian and Bailon dated from from 2007 to 2009, and their relationship was broadcast to the masses on Keeping Up With The Kardashians. Unfortunately, they didn't end on the best of terms due to cheating on Kardashian's part, something he admitted to in a January 2010 episode of the reality show.

Following their split, it appeared there was some tension between the two, with Bailon speaking out on the cheating scandal during a September 2016 segment of her talk show The Real. After Kardashian insinuated one of his exes was guilty of cheating on him, she clarified that she absolutely was not that ex.

“I absolutely never cheated on Rob. And I just want to clarify that,” the former Cheetah Girls member said. “And the way it’s said, it’s like, ‘She slept with many people.’ I’m like, ‘Uh, I can’t speak for anybody else, but I can assure [you] that was not me.'”

Although there doesn't seem to be any bad blood between Bailon and her ex over the misunderstanding, she went on to admit she was slightly scarred from his infidelity.

“I will say this, I think anyone who has been in a relationship where they’ve been cheated on or hurt, it affects you,” she said. “It affected me so much that I made it a conscious decision not to do that to the next person because when you experience the kind of hurt that being cheated on will make you question yourself. “

By December 2018, Bailon seemed indifferent overall, and spoke candidly to Us Weekly about their past relationship and her time on KUWTK.

“I do think it’s funny, only because it really is the shortest relationship I’ve ever had," she said of her romance with Kardashian. “It’s reality TV, and I used to get so annoyed by that, but I don’t now. Now, I’m just like, ‘It is what it is.’ I was like, ‘Guys, but I’ve accomplished other things,' and I think that even got misinterpreted as me saying at some point I wish I had never done the show. I don’t think it was that at all."

Fast forward to 2020, and the pair have had more than a decade to bury their past drama. Both Bailon and Kardashian have fully moved on. The Cheetah Girls star is happily married to Gospel artist Israel Houghton after tying the knot in November 2016, and she's still a regular host on The Real.

Meanwhile, Kardashian only has one woman in his life these days: his daughter Dream, who was born in November 2016. When it comes to his TV work, Kardashian is seemingly making a big comeback to the spotlight after taking a hiatus from reality television, and is said to be returning to Keeping Up With The Kardashians in 2020.

Bailon and Kardashian may not play a big part in each other's lives today, but they've seemingly found their happiness with other people and don't seem to bear any ill feelings toward one another anymore.

More like this
Here's The Kardashian-Jenner You're Most Like, Based On Your Love Life
By Candice Jalili
Colton Underwood Is Reportedly Making A Netflix Show After Coming Out As Gay
By Dylan Kickham
This 'Drag Race' Season 13, Episode 14 Clip Shows The Top 4 Getting SO Real
By Lexi Williams
Stay up to date