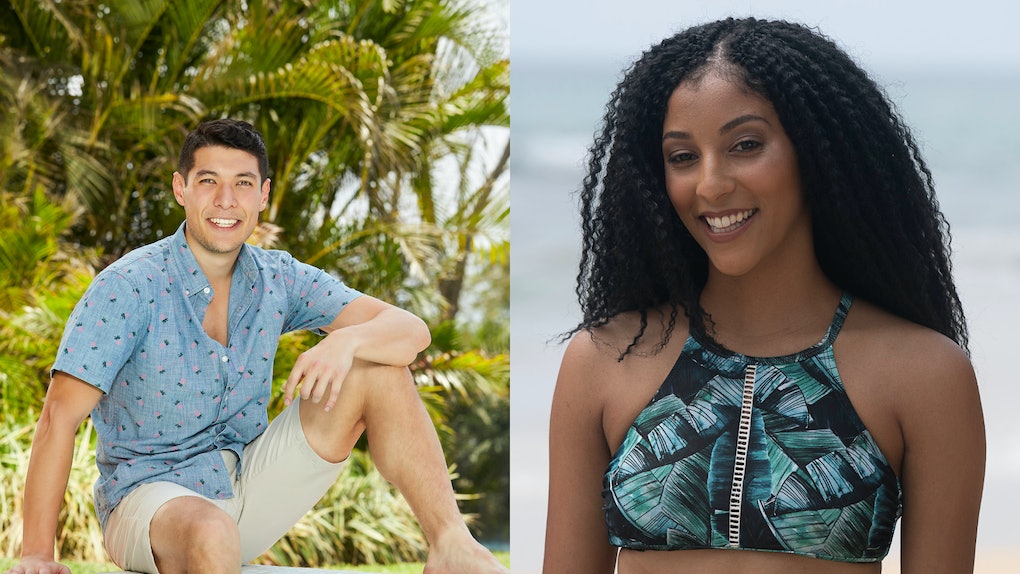 Are John & Olivia Dating After 'Paradise'? Here's What We Know About The Cute Couple

Out of all of the men on this season of Bachelor in Paradise, I'm pleased that fan favorite Venmo John suddenly became a hot commodity among the women of Paradise. Tech nerds deserve love too, and while John Graham has had his fair share of flirtations on the beach, he's currently in a relationship with short-lived Bachelor Season 22 contestant Olivia Goethals. With Paradise proposals on everyone's mind this week, John and Olivia haven't been together very long, so we probably won't see an engagement between them on TV. But on a lighter note, are John and Olivia dating after Paradise?

As he awkwardly shared during talks with Paradise Season 2's Jade and Tanner, John has kissed a total of seven women during filming, while Paradise latecomer Olivia seemed to lean toward John even after a sweet date with Twitter star and Bachelorette Season 13 contestant Diggy Moreland. Everything is sunnier at the beach, but seeing as it's been more than a month since Paradise wrapped filming, any relationships surviving the show could have imploded since moving on to the real world. Bachelor stars are pros at hiding their relationships until a season officially ends, but their social media accounts often contain great clues about some pairs' current status.

While John and his dad jokes are a must-follow for any Paradise fans, he has yet to post any Instagram photos from filming of himself with Olivia. Many other contestants haven't been shy about sharing photos of themselves with their Paradise significant other. John has posted plenty of photos with his Bachelorette friends on Instagram, but apart from sharing a series of screenshots from a FaceTime call with Chelsea Roy, who once gave him a rose, John's social media has taken a humorous approach to all things Paradise.

Case in point: Unless he sparked a secret relationship with Chelsea after filming, John just really loved his time synchronized swimming with Chris Randone above all else in Paradise.

On the other hand, Olivia is a closed book. Although John follows her, her Instagram is private, and she hasn't tweeted since March 22, which is basically a lifetime in Bachelor Nation. We know close to nothing about her since she was a Night One castoff on Arie Luyendyk's Bachelor season, so it's up to frantic stalking of other contestants' social media for any hints of what she may be up to today.

While it's tricky to say whether Olivia and John are still together, the Paradise finale preview suggests that Olivia does open up about her past relationships to Krystal. In a fleeting snippet of the preview, she tearfully shares that "he cheated, over and over and over again." It's safe to say that the conversation isn't in regards to John — if anything, the tech wiz has been pretty communicative with and loyal to each woman interested in him.

In the same preview, Olivia and John are also seen holding hands and waving at someone off camera as they walk down the beach. It honestly looks like they're leaving Paradise, but seeing as they appear to be wearing swimsuits, they're definitely not fresh off their own proposal. Do they decide to leave the show as a dating couple? We'll have to wait and see for the season finale's explanation of where they stand today.

The two-part finale of Bachelor in Paradise Season 5 begins on Monday, Sept. 10 at 8 p.m. ET on ABC.

More like this
Clare Crawley's Tweet About Matt James Reportedly Dating Grace Amerling Is Shady
By Candice Jalili
What Would An LGBTQ+ 'Bachelor' Season Look Like?
By Abby Monteil
Reality Steve Apologized To Demi Burnett For Sharing His "Graphic Sex Dream"
By Candice Jalili
Stay up to date