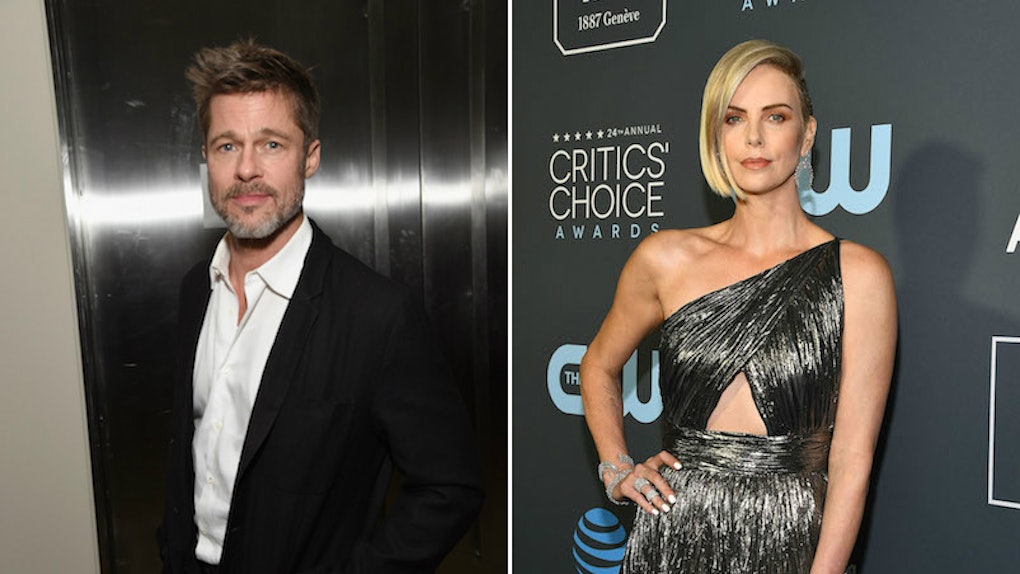 Are Brad Pitt & Charlize Theron Dating? Here's What We Know About Those Dating Rumors

Actor Brad Pitt and actress Charlize Theron have a ton in common: they both are wickedly talented, incredibly good looking, and probably both have bank accounts with a lot of zeros. But some sites are reporting that the two are ~a thing~ now — like, a romantic thing — and I'm just not sure I can gel with those rumors. So, are Brad Pitt and Charlize Theron dating? Or is it just mere speculation? Elite Daily reached out to both Pitt and Theron's teams for comment on the report, but did not hear back by the time of publication.

According to The Sun, a source revealed that Brad Pitt and Charlize Theron were "casually seeing each other for nearly a month," and met through Sean Penn, who is Theron's ex. The two were reportedly spotted together at LA’s Chateau Marmont, and the source noted that "they were ridiculously touchy-feely and his arm was around her back," adding, "Brad seemed in a really good place — they both looked really happy."

But before we start figuring out the best couple name (Bralize? Charad?), let's hear what some other publications had to say about this reported relationship. Both People and Entertainment Tonight have published conflicting reports on the matter, calling out The Sun for its false claims.

Per a source from People, Pitt and Theron "did a shoot together six months ago [for Breitling watches]. They have not been out together recently, and were never dating. Reports of them being involved romantically are false."

Honestly, this seems to be the case since these two stars have yet to be spotted hanging out together. And, according to a source per Entertainment Tonight, the two are merely friends, and nothing more. "Brad and Charlize have known each other for years and recently became even better friends after working together [on the Breitling watches shoot]," the source noted, and continued, saying,

They enjoy each other's company and connect on many levels. Brad and Charlize have a lot of mutual friends and share their love of acting, but neither of them are ready for a serious relationship right now. They are both very single at the moment so it's no surprise people are talking romance. They truly would make a Hollywood power couple, but at this point, they're friends.

Does this mean somewhere down the line, these two could get together? Well, probably not, considering the source also noted that Pitt "isn't looking for an actress as a lifetime partner."

"He's tried that route already, and while he loved both Jen [Aniston] and Angelina [Jolie] very much, and he grew tremendously as a person with both women, he is ready for something different," the source revealed.

While this certainly means that he and Charlize Theron have no spark, this does open up the door for all the non-famous women in the world, so at least there's something to celebrate. That's right ladies, Brad is single and ready to mingle!

I don't know about you, but I feel as though this is great news. Now all I have to do is find a way to stumble into Brad Pitt and make him fall in love with me, which can't be that hard.

Besides, the couple name Braren has a certain ring to it, right?