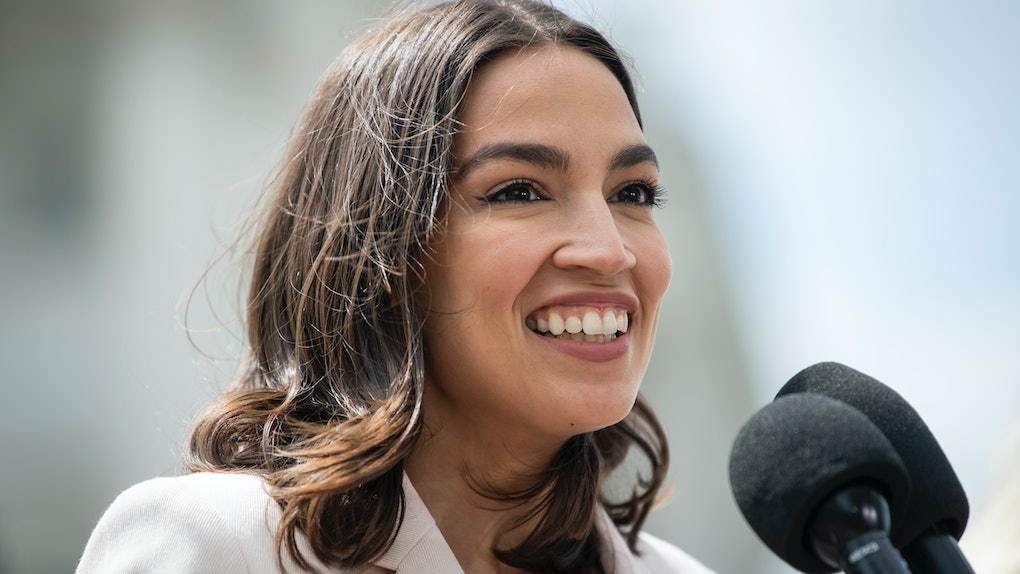 President Joe Biden marked almost 100 days in office by delivering his first address to a joint session of Congress on Wednesday, April 28 — and a few members of his own party were quick to chime in with some context. Following Biden's speech, which included a call for reforms to the criminal justice system and law enforcement in a proposed $1.8 trillion American Families Plan, Rep. Alexandria Ocasio-Cortez (D-New York) shared a message about how far the country had come when addressing progressive issues. AOC's tweet about Biden's 2021 address to Congress was an important reminder to recognize the activists who put in the work to get these issues taken seriously — and eventually, get them into a presidential address.

Biden's address, the first of his presidency, was widely hailed as an ambitious outline of progressive ideals. In it, the 46th president addressed racism and police reform, the right to unionize and earn a living wage, and a push for affordable child care, among other things. "My fellow Americans, we have to come together. To rebuild trust between law enforcement and the people they serve," Biden said at one point in the speech. "To root out systemic racism in our criminal justice system and to enact police reform in George Floyd’s name that passed the House already." He also spoke in favor of the Protecting the Right to Organize Act, a $15 minimum wage, and paid family leave.

In response, Ocasio-Cortez reminded her followers that until very recently, issues like access to child care or combatting white supremacist terrorism weren't a priority for any mainstream party. While applauding Biden's proposed agenda and acknowledging how much work still had to be done, the freshman lawmaker gave credit to the activists and organizers who'd worked to prioritize progressive issues.

Ocasio-Cortez wrote, "Not enough credit is given to the countless activists, organizers, and advocates whose relentless work is why we are even hearing anything about universal childcare, white supremacy as terrorism, labor, and living wages tonight."

Ocasio-Cortez appeared to signal her approval for Biden's plan while acknowledging all the work that still needed to be done. She continued, "Yet we cannot stop until it’s done. Keep going."

Ocasio-Cortez's comment points out that Biden's speech doesn't exist in a vacuum — these issues getting their moment on the national stage are the results of years and years of work by grassroots activists. For example, the Black Lives Matter movement was started by civilian activists in 2013, and national protests since — including in the summer of 2020 — have kept the issues of racism and police brutality in the public eye. Meanwhile, labor movements like the unionizing campaigns at Amazon warehouses in Alabama and New York City made national news in 2021 (and earned Biden's approval).

It's only been 100 days since President Biden took office, and there's a lot still to do. But in the meantime, the response to his first address shows his latest progressive policy proposals have the support of the more left-leaning members of his party.