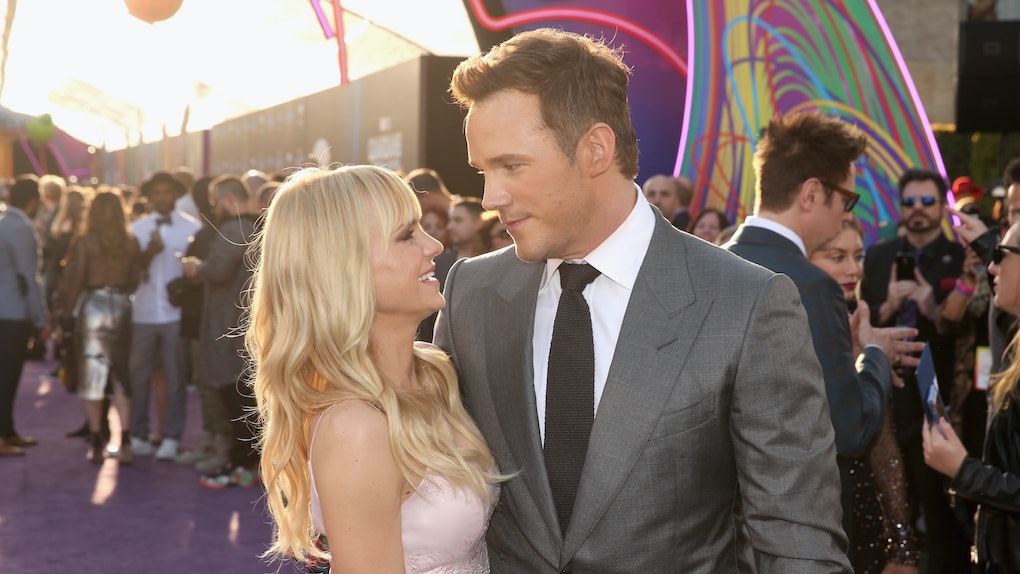 Break-ups are an inevitable part of life — no matter how much they suck. Thankfully, as average, everyday people, living far away from the spotlight, we can privately grieve, become shut-ins, and endlessly Facebook stalk someone who is maybe (?) an ex-boyfriend's new girlfriend's aunt. When you're the mega-famous Anna Faris, though, and break up with the equally mega-famous Chris Pratt, all sense of privacy, boundaries, and quiet healing goes right out the window. Case in point — it turns out that Faris deleted a chapter about Pratt in her memoir, and our hearts are breaking for her.

According to an Oct. 27 report from Page Six, a uncorrected advance proof of Faris' book Unqualified was sent to members of the press two months before the couple announced their split. Those pages contained a chapter about how Faris and Pratt make their relationship work long-distance alongside their busy shooting schedules. Faris discussed how the two talked on the phone, and tried to make the most of the time they did get to spend together. She also mentioned that they were considering moving to their home state of Washington in the future, and living a quieter life.

By the time the book was released to the public, that chapter had been removed.

During an interview with The New York Times, Faris noted that very few changes had been made to the book as a result of the split. The memoir's foreword, written by Pratt, stayed in. That doesn't mean that the Avengers actor didn't address the elephant in the room. And yes, it was a little awkward. He wrote, per Slate,

When I was asked to write the forward [sic] for Unqualified, Anna’s memoir, I immediately said yes without even thinking about it. And boy did a lot happen between then and now. So much. Like … soooo much. Crickets. Stares at phone. Literally googles the word forward. Wow … Okay. So … it’s actually spelled FOREWORD. With an O and an E. Who knew? Siri did. Of course. We’ve been through a lot, she and I.

Oh, dear. He did, however, say that Faris was "the person I spent one amazing decade with." In the scheme of things, that's a really, really lovely thing to say about someone who is your soon-to-be ex-wife.

And Faris returned the sentiment. She told The New York Times that while, yes, the whole situation was a little uncomfortable, her ex-husband helped her get through it.

"At first, I was really nervous about the idea of the book coming out and coinciding with these major life changes we were having, but Chris is amazing," she said.

Oh, and she has even more amazing things to say about him, which makes this whole split seem remarkably healthy.

"We'll always have each other and be incredible friends," Faris told PEOPLE Magazine in October. "There is still so much laughter in our lives together, and he is so proud of me, still. We watched each other grow, and he still cracks me up all the time. And I think I crack him up — unless he’s a really good actor and great at faking laughter."

"I hope the people who read it understand that a lot of our problems tend to be universal," she said during an interview on Live With Kelly and Ryan. "The idea of jealousy, loneliness, heartbreak, there's a commonality no matter what profession you're in, no matter where you live."

*Sigh.* I would happily have an amicable, loving break-up with Anna Faris or Chris Pratt any day of the week.