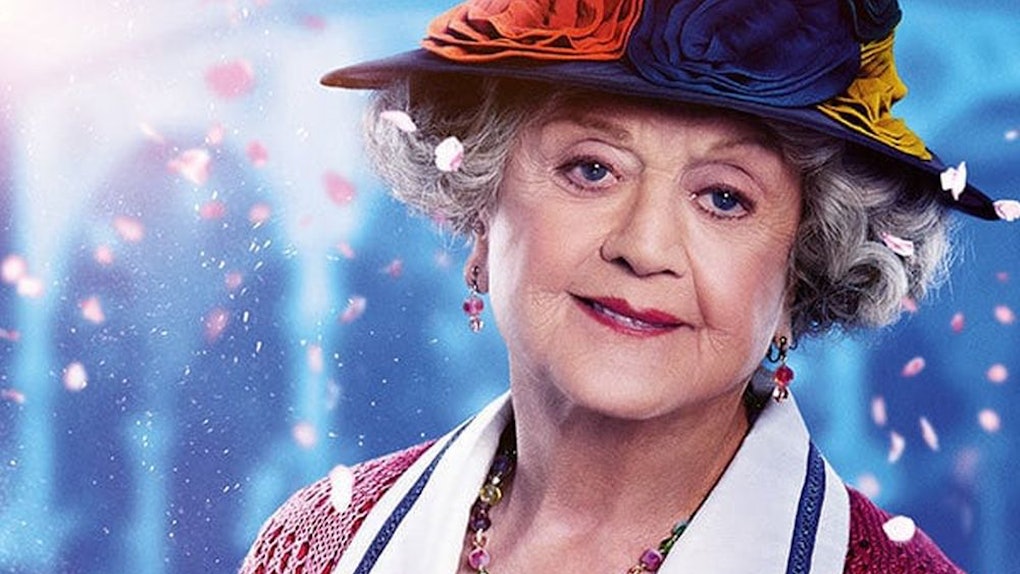 The cast of Mary Poppins Returns is stacked to the gills with talent, starting with Emily Blunt in the title role, Lin-Manuel Miranda as lamplighter Jack, Emily Mortimer as the adult Jane Banks, and Ben Whishaw as her brother Michael. But that's only the beginning: The movie imports an entire segment of the Mamma Mia cast, with Meryl Streep, Colin Firth, and Julie Walters all in key roles. Dick Van Dyke also rolls up and shows off dance moves most 91-year-olds could never manage. However, it's Angela Lansbury's Mary Poppins Returns cameo that arguably brings the most joy to the film.

Lansbury, who plays the Balloon Lady, doesn't show up until the very end of the film, but her role is an important one. Her character first appears in Mary Poppins Comes Back, the 1935 sequel to P.L. Travers' Mary Poppins novel. (There are actually eight books in the series, all written by Travers between 1934 and 1988.) She also appears in Mary Poppins Opens The Door, the third book in the series. Her main schtick is that she advises her customers to choose their balloons wisely, because if they choose correctly, their names will magically appear on their balloons of choice.

In the film, the Balloon Lady's magic is even more powerful, and Lansbury's role even merits her own musical number. Check out the new song below:

This number is pretty much the equivalent of the original Mary Poppins song "Let's Go Fly A Kite." When the song appeared toward the end of the new film, Mary Poppins was still with the Banks family, but she knew the door was about to open, and she would soon no longer be needed. Michael Banks (Ben Whishaw) had saved his house with the help of his children (and a little bit of time turning by Mary Poppins), while Jane Banks had her meet-cute with Jack the Lamplighter, and the two of them appeared to have found the beginning of a beautiful friendship.

As the song said, there was nowhere for anyone to go but up, and this was demonstrated when characters grabbed hold of their balloons and floated above the London skyline. Of course, not every character was able to get in on the fun: The recently-unemployed William "Weatherall" Wilkins, Colin Firth's evil banker character, was too quick in his balloon selection and did not select the right inflatable for himself, proving the Balloon Lady was right to warn her customers to choose carefully.

"Nowhere To Go But Up" is one of the best songs on the new Mary Poppins Returns soundtrack. Like the best musical numbers in the original movie (including "Feed The Birds," "Stay Awake," and "I Love To Laugh,"), it's simple in its message and simple in its lyrics, which makes it easy to become an earworm for anyone walking out of the theater.

One of the general complaints in reviews for the new film is the songs are forgettable, and in my opinion, it's because the lyrics don't really stick in your head. It seems the writers worked hard to match the nimbleness of the elaborate Poppins tunes like “Supercalifragilisticexpialidocious,” but it's not the verses that people remember; they remember the childlike, nonsense word and the catchy “Um-dittle-ittl-um-dittle-I.” However, Lansbury's song "Nowhere To Go But Up" nails the simplicity that makes the original Mary Poppins songs so classic. It's only right that someone of her standing is the one to sing it.