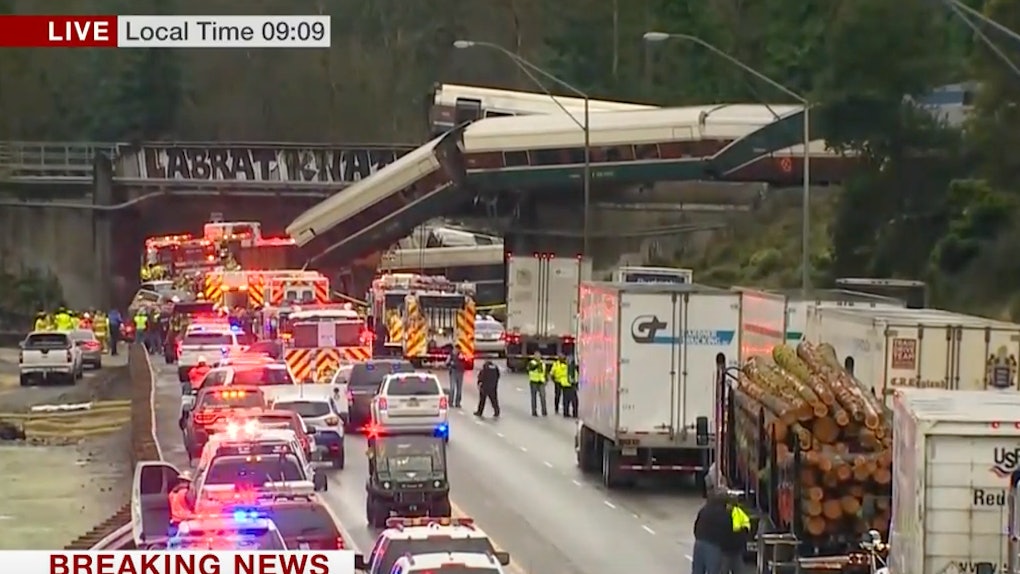 On the Interstate Five Freeway just outside of Seattle, Washington, an Amtrak train derailed, causing "multiple fatalities" according to local officials. The train derailed on a overpass just before 8 a.m. PST on Monday, Dec. 18, onto a heavily-trafficked freeway of cars and motorcyclists. According to Pierce County Sheriff's Office, at least six passengers are confirmed dead, and no motorists were killed on the freeway below, but some were injured. The office's spokesman Ed Troyer said that emergency responders are working to get survivors out and to area hospitals.

The train, carrying roughly 80 passengers, was Amtrak's first train to depart on a new "Cascades" route between Seattle and Portland, according to Fox News. The route previously carried only freight trains, and Monday Dec. 18 marked the first passenger train taking the new route. Amtrak tweeted shortly after the incident happened with a number to call for passenger information on the train.

According to Fox News, Amtrak said 78 passengers and five crew members were on board the train on Monday, and Amtrak has since received reports of the passengers and crew members onboard who were taken to the hospital. Amtrak also has reportedly cancelled two other Cascades trains.

Here are some shocking photos of the incident, including an aerial view of the freeway around Tacoma, Washington.

In October 2017, Amtrak announced a new route that would cut travel time between Portland and Seattle by 10 minutes (to roughly three hours and 20 minutes) by rerouting between the cities of Tacoma and Olympia, according to the Portland Tribune. The new route was intended to increase daily round-trips between Seattle and Portland for commuters and travelers. Tacoma, which is right outside of Seattle, is the city where the accident happened with the first round of passengers taking Amtrak's new route.

In the midst of the chaos, many people on the scene were reportedly acting as first responders and running to rescue passengers on the train. A bystander at the scene, Wendy Simmons, told Fox News, “First responders actually climbed up into the dangling cars to get people out. People were pulling first aid kits out of their cars — putting jackets on people."

One passenger on the back end of the train, Chris Karnes, told the Associated Press in a phone interview, "I'm not sure what got hit. I'm not sure what happened." Karnes is also on Pierce Transit's advisory board, and tweeted shortly after the incident, saying, "The train has derailed. Emergency crews are on the scene. Massive damage. People are hurt." He said the train appeared to have hit a truck, adding that the car was "destroyed."

Another witness on the scene told KOMO-TV that dozens of motorists on the other side of the freeway ran to the help.

Investigations are already being launched into what happened. The National Transportation Safety Board tweeted, "NTSB is launching a go-team to investigate the Amtrak passenger train derailment in the State of Washington. Team will depart DC today."

The Washington State Department of Transportation also tweeted a photo of the lingering traffic on the Interstate five freeway as a result of the derailment. They tweeted, "Delay travel or plan for long delays." According to Fox News, the southbound I-5 freeway is expected to be closed down for an extended period of time. The I-5 freeway is central to travel up and down the West Coast, so it will likely affect thousands of residents during the holiday travel period.

For anyone in or around the Washington area, be sure to adjust travel plans accordingly and avoid the I-5 freeway until the scene calms down and freeways open up.