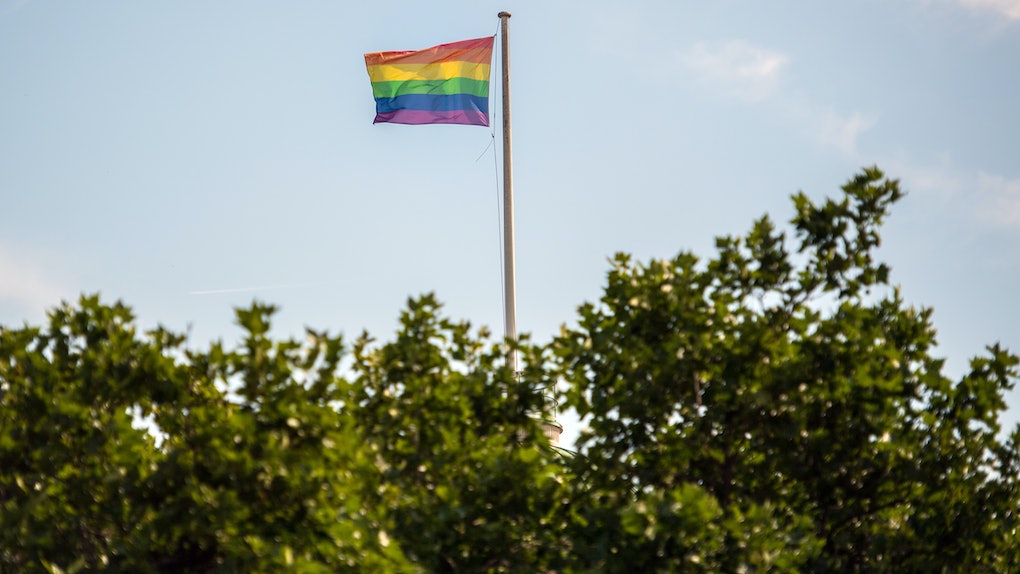 If you're looking for a heartwarming story about community support in trying times, this is it. Despite the Trump administration's refusal to let American embassies fly rainbow flags during Pride month, some U.S. embassies are apparently pushing back with their own special Pride-themed tributes. American embassies' LGBTQ tributes after Trump banned the Pride flag are so heartwarming and show support for LGBTQ communities globally.

According to NBC News, the Trump administration has been denying requests from U.S. embassies to fly rainbow Pride flags from embassy flagpoles during Pride month. According to diplomats, the U.S. embassies in Israel, Germany, Brazil, and Latvia are among those who have been denied permission to fly the flag. In a press briefing on June 10, Department of State Spokesperson Morgan Ortagus said that Secretary of State Mike Pompeo had taken the position that only the American flag should fly from the official embassy flagpoles, but Pride displays not on official flagpoles were not forbidden or in violation of any order.

So, embassies around the world are clearly finding some creative and heartwarming ways to show their support for Pride. On June 4, the U.S. embassy in New Delhi, India, posted a photo of the building lit up with rainbow lights, accompanied by the caption, "The United States Embassy in New Delhi is lit up in #Pride." The U.S. Embassy in Seoul, South Korea, posted a large rainbow flag on the facade of its building, near the U.S. flag. The U.S. embassy in Vienna, Austria posted a photo of the Pride flag hanging from the flagpole back in May to recognize International Day against Homophobia, Transphobia, and Biphobia. The U.S. Ambassador to Nepal Randy Berry even tweeted a photo of himself with the rest of the embassy staff members dressed in rainbow colors, posing by balloons that spelled out "Pride 19." Berry wrote, "I join people around the world in celebrating ... #PrideMonth, and reaffirm the U.S. commitment to defending human rights for all."

In an interview with NBC News on Monday, June 10, Vice President Mike Pence appeared to support the Trump administration's decision to deny requests to fly rainbow flags from embassy flagpoles. When journalist Kristen Welker asked Pence if the Trump administration directed U.S. embassies not to fly the Pride flag, Pence responded, "I'm aware that the State Department indicated that on the flag pole of our American embassies that one flag should fly and that's the American flag and I support that." He added, "We put no restrictions on displaying any other flags or any other displays at our embassies beyond that."

The decision to prevent U.S. embassies from flying Pride flags starkly contrasts Trump's tweets at the start of Pride in which he wrote,

As we celebrate LGBT Pride Month and recognize the outstanding contributions LGBT people have made to our great Nation, let us also stand in solidarity with the many LGBT people who live in dozens of countries worldwide that punish, imprison, or even execute individuals ... on the basis of their sexual orientation.

He added that his administration has launched a global campaign to decriminalize homosexuality even though, in the United States, his administration has been heavily criticized for its approach to the LGBTQ community, which includes rolling back discrimination protections on things such as housing and health care.

Although the Trump administration has outwardly altered the rights of people in LGBTQ communities and denied showcasing Pride flags at U.S. embassies, its heartwarming to see embassy staff members across the world show support in their own ways.