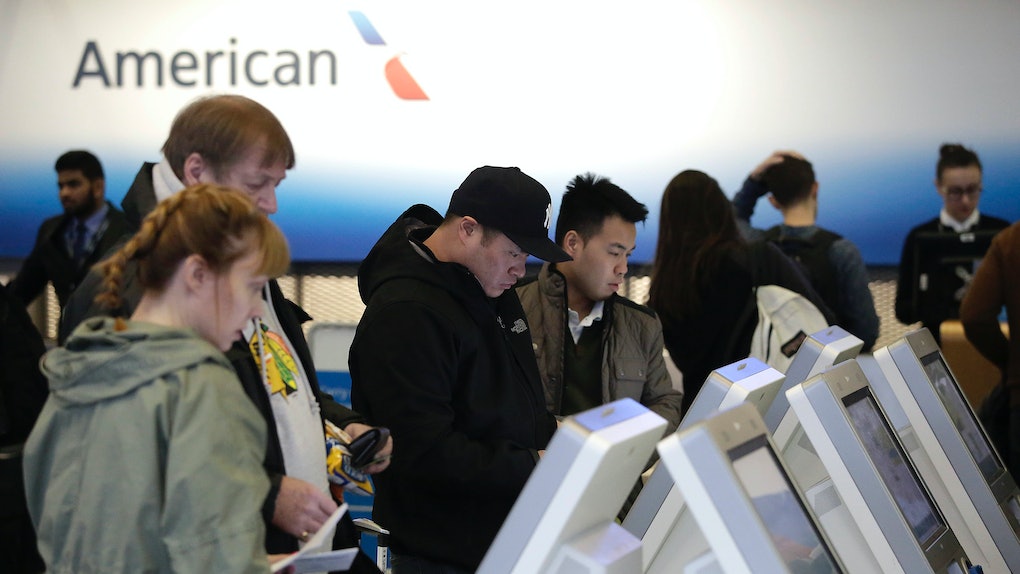 American Airlines’ Christmas Flights Don’t Have Enough Pilots, Thanks To A Glitch

With the holidays upon us, at least several million of us will take to the skies in order to celebrate the holiday season, according to both the Bureau of Transportation and Travel + Leisure. But a glitch affecting American Airlines Christmas flights might complicate your travel plans. The airline accidentally allowed all pilots to take vacation during the week of Christmas, which has reportedly left thousands of flights without assigned pilots. Oops.

On Nov. 29, American Airlines announced that a "computer glitch" allowed all of their pilots to schedule vacation over Christmas, according to CNBC. This has left thousands of flights — including those out of large hubs like Miami, American's own hub in Dallas-Forth Worth, New York LaGuardia, and Chicago's O'Hare — without assigned pilots, threatening holiday plans for many.

So what does that mean if you're flying American this holiday? Well, it may cause you a bit of anxiety, but, if you take the airline's word for it, there's nothing to worry about. Not yet, anyways.

American Airlines spokesman Matt Miller told Bloomberg News that the airline is "working diligently to address the issue" and avoid cancellations all together.

According to Bloomberg, American has to "rebuild its staffing schedule" much like after storm outages, but the airline expects everything to be resolved in time for holiday travel.

Miller declined to specify the number of flights affected, but the CBC reports that as many as 15,000 flights between Dec. 17 and 31 have been affected by the glitch — a number echoed by the Allied Pilots Association (APA), a union which represents roughly 15,000 pilots with American Airlines. The union was notified on Friday, Nov. 24 of the glitch and has been working with American to fix the problem.

We have reserve pilots to help cover flying in December, and we are paying pilots who pick up certain open trips 150 percent of their hourly rate — as much as we are allowed to pay them per the contract. We will work with the APA to take care of our pilots and ensure we get our customers to where they need to go over the holidays.

Miller — and by extension, the airline — seems hopeful that the problem will be resolved, and he said that they're offering the maximum amount of pay possible, per their contract.

But the APA disagrees: the union has filed a grievance against American for the proposed solution — 150 percent pay — saying that it actually violates American pilots' labor pact. APA spokesman Dennis Tajer said, further, that the airline has to come up with something more to make giving up an already-scheduled vacation worth it.

Tajer told Bloomberg, "This is certainly not routine." In fact, a statement posted to the APA's website says that American proposed the 150 percent pay increase without consulting the union — and the pay is not guaranteed:

Because management unilaterally created their solution in violation of the contract, neither APA nor the contract can guarantee the promised payment of the premium being offered.

Which means that American could basically offer time and a half to pilots in exchange for giving up a holiday vacation, then not deliver.

It's tricky to say exactly how many people fly during Christmas (and who, exactly, will be affected if the union and the airline do not come to an agreement). Of the roughly 100 million people who travel during the holidays, which the Bureau of Transportation considers Thanksgiving through New Year's Eve, the vast majority will drive, according to AAA. During the last holiday season, air travel increased by 2.5 percent, "with more than 6 million Americans flying to their holiday destinations."

And given that American is the country's largest carrier, it wouldn't just be the 15,000 unmanned flights affected. This scheduling conflict, if not resolved, could have a ripple effect, with people fighting to fly home with other carriers: ridiculously full flights, expensive itineraries. (Kind of like the insanely expensive flights out of Puerto Rico after Hurricane Maria struck the island.) It's hard to say what could happen, but what we do know is that American messed uuuuuup.

In fact, at least one person has already suggested bailing, like rats abandoning a sinking ship.

And, of course, the jokes practically write themselves.

The airline has a little over two weeks to come to an agreement with the union and all of the pilots who have already scheduled time off.

And given that air travel increases during Christmastime, the timing couldn't be worse. Happy holidays, everybody!