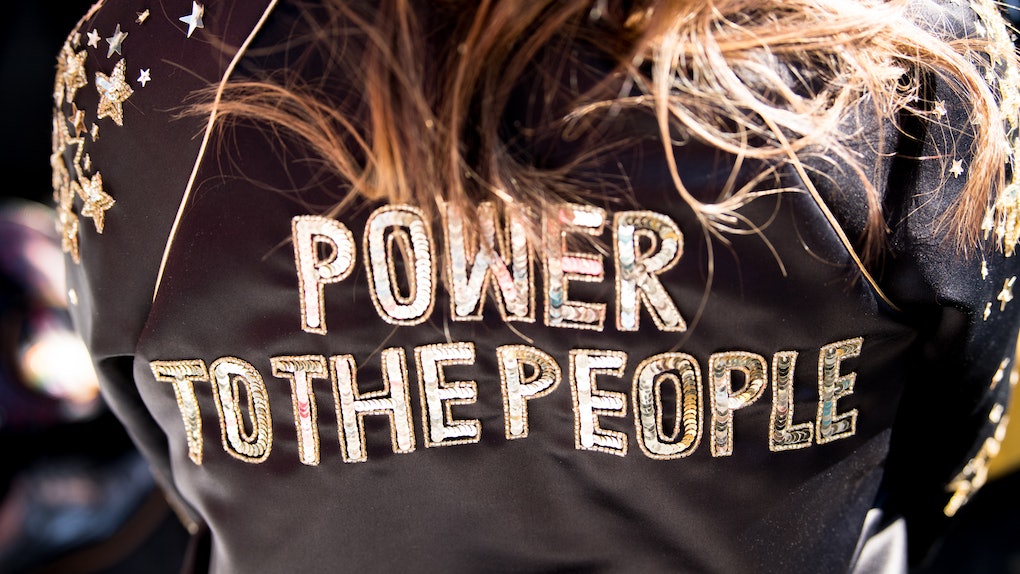 Ahead Of The 2019 Women's March, This Activist Is Looking At How Far We've Come

It's almost time to march again. On Jan. 19, masses of women and allies around the world will pour into their streets for 2019's Women's March, the third year of the ongoing mass movement highlighting social issues across the board and calling for change — and not just for women. This year, March On, an independent grassroots organization that grew out of the 2017 Women's March, is using the march as an opportunity to jump-start the March On The Polls 2020 campaign, a two-year initiative to mobilize progressives ahead of the next presidential election. So, the movement is seemingly only getting bigger.

The Boston Women's March was one of 600 sister events in 2017, spearheaded by a bunch of hungry and steadfast community activists who got together, set goals for what they said needs to happen in the country, and then used the resources they had to start making the change they want to see. "Coming off the election results and this mass depression, it was a beautiful thing to see people come to this decision that we're all going to show up at the same place with positive vibes and not make it about Trump," Natalie Sanchez, one of the original organizers of the 2017 Boston Women's March, tells Elite Daily. Sanchez, 33, is now Director of Affiliate Outreach with March On, which is organizing this year's Boston march. Two years after the initial march, she's still working to keep the movement... well, moving.

After the 2017 march, Sanchez says, things didn't slow down. Local activists formed the non-profit organization March Forward Massachusetts, to support and motivate communities to get active on a local level following the 2016 presidential election — but not make it all about one person. While the Women's March started as a symbol of resistance to President Trump's election two years ago, it has since become much bigger than that. In 2018, the march, themed "Power to the Polls," was all about rallying people around the political causes that shape elections, and getting people registered to vote. Estimates say that up to 2.5 million people attended the event nationally, including some influential politicians such as Sen. Elizabeth Warren (D-Massachusetts) and Rep. John Lewis (D-Georgia).

But building up to that took some work. Sanchez tells Elite Daily that, when organizing the 2017 Boston Women's March, it was important for her branch to ensure that it was sending the right messages to the public and would make people feel safe to get engaged. "We wanted the energy and tone to be positive," Sanchez explains. "We didn't want conflict or a protest or for people to be angry, even though we knew it was an opportunity to shed some of that [election] anger."

Since that first event, the Boston's Women's March has seen some drastic changes. For one, Sanchez says the goal of the march is different. "The focus has been driven by the frustration of what we thought the [Trump] administration was going to do, but now we know what it's done," she explains. "And now we know there's so much [more] than the presidency at stake, there's so much more social healing to be done." For March On, which is not affiliated with national march organizer Women's March Inc., this includes tackling issues on the federal, state, and local level, which is where the March On The Polls 2020 campaign comes in. The campaign aims to engage voters, get them to the polls, and change the narrative around voting and civic participation in an effort to push more progressives into office.

And keeping the momentum focused is a challenge. Sanchez says that many localized marches have shifted their efforts around International Women's Day, which is on March 8, 2019, and that some marches have put off their events for the weather. With Boston expecting to get snow on the day of the Jan. 19 event, Sanchez says the city's march is expecting to see between 20,000 and 40,000 participants, maybe more depending on how the weather pans out. "It's hard to tell," she states. According to local CBS News affiliate WBZ4, an estimated crowd of 175,000 attended the 2017 Boston March, a count which Sanchez herself puts at around 200,000.

As the movement has swelled, it has also faced some more serious trials. Members of the national Women's March organization, Women's March Inc., have faced accusations of anti-Semitism by former organizers, leading to ongoing discussions of who the movement is for and who it welcomes. Those tensions only intensified in January of 2018, when Women's March Inc. co-president Tamika Mallory appeared on The View and failed to denounce derogatory remarks Nation of Islam leader Louis Farrakhan made about Jewish people, reported USA Today. In a public statement written by organizer Linda Sarsour, the Women's March apologized "for the harm we have caused" and reaffirmed its commitment to an intersectional movement, which included fighting against anti-Semitism. An additional statement said that the march did not support statements by Farrakhan. Women's March Inc. did not immediately respond to Elite Daily's request for additional comment on the matter.

While Sanchez says she doesn't agree with some steps the national Women's March organizers have taken, she says that Women's March Inc. doesn't speak for the entire movement — as evidenced by March On's independent growth. "We're all human at the end of the day," she explains. "I understand people's frustrations ... but people have to remember that this is not all of the movement."

Besides, there's a bright side to the controversy — it's forced marchers to face up to the need for growth. Sanchez continues, "We're all connected, and these kinds of divides, as painful as there are, as demoralizing as they seem, they're an opportunity to realize that [connectivity] and to step up and do it better. We'll get past it as a movement ... We always want to get along."

For now, she's working hard to make sure people get involved. Sanchez says the Boston Women's March is working with organizations like Planned Parenthood and the American Civil Liberties Union (ACLU), which she says builds relationships on both a local and national level to create strategies to motivate higher turnout rates and increase awareness of the event, to continue building on its success. "We're really trying to identify organizations with expertise," adds Sanchez.

If you're interested in getting involved in one of these marches, Sanchez has some tips for you: "Have compassion. Relationships are what matters. Build deep communities with the people you care about. There should be no division between your personal and professional life."

As for where the movement goes moving forward, Sanchez is looking forward to the opportunity to grow closer and find healing as a community, whether we're all "polar opposites" or no. "We have shared pain. We have shared trauma," she says. "We have real responsibilities. The more of us, the better."