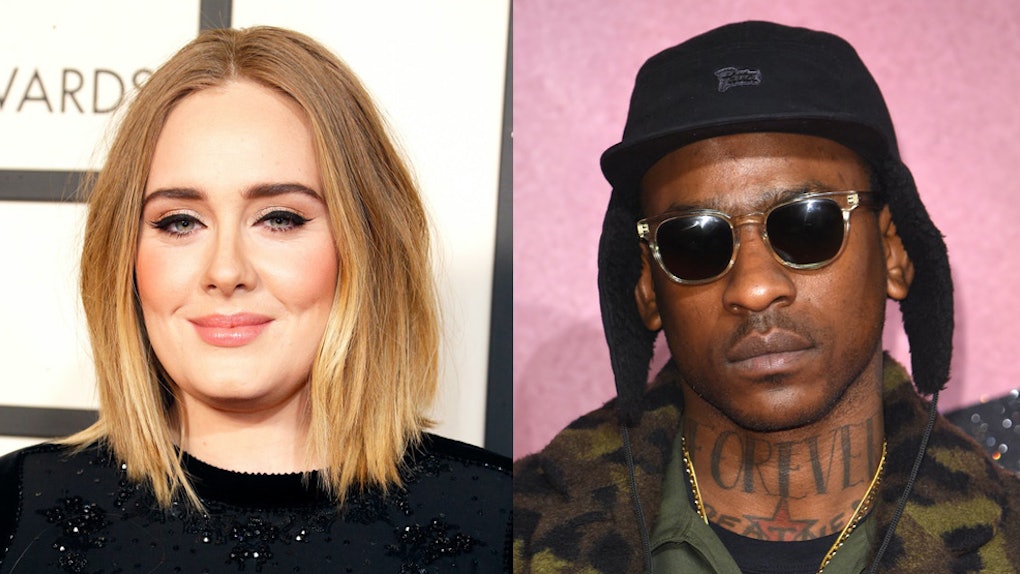 If Adele and rapper Skepta aren’t an item, they sure have a funny way of showing it. After all, flirting cryptically on Instagram seems to be the new Facebook official, right? Then again, their easy flirtation and chemistry make sense when you take Adele and Skepta's astrological compatibility into account. Rumors that Adele and Skepta are dating began in October 2019 when the two were spotted out together in London, shortly after the “Someone Like You” singer split from her ex-husband Simon Konecki. At the time, a source reportedly told The Sun that they had been spending more time together. “Adele and Skepta have been there for each other a lot after both their relationships split up. They have a close bond and there's definitely a special connection,” the source reportedly said.

As of now, neither party has confirmed a romantic connection. (Elite Daily reached representatives for both Adele and Skepta for comment, but did not hear back by the time of publication). Unless, of course, you count their recent flirt sesh on Instagram. Adele posted photos of herself watching her 2016 Glastonbury performance while rocking out in the dress she wore that night. In response, Skepta left a very flirty comment. “Finally got your Instagram password lol," earning him a wink face and heart emoji in return.

Fans speculate that Skepta's message is proof he's the photographer behind the photos on Adele's account. While that’s far from rock-solid evidence that these two are together, it does make you wonder what their maybe-relationship is actually like. Are they compatible? If their zodiac signs are any indication, the answer is: very.

Adele was born May 5, 1988, under the sign of Taurus, and Skepta’s birthday is Sept. 19, 1982, which makes him a Virgo. These two signs are one of the most compatible pairings in the zodiac. They both thrive in committed relationships and live to make one another happy. They're find joy in just being at home together, relaxing in the comfort and security of the other's company. So, if it turns out Adele and Skepta are the real deal (fingers crossed!), here's how their relationship dynamic might be like, based on their zodiac signs.

They both appreciate the domestic side of life.

When two grounded earth signs like Virgo and Taurus come together, they have no trouble building a strong foundation for their relationship. While both signs have a social side to them, in their heart of hearts, they love nothing more than a quiet night in with the one they love. Sensual Taurus will want to snuggle up with a movie, while generous Virgo will make sure they have all the favorite snacks. They both prioritize a happy home life and love to nest and create their domestic bliss.

Virgo and Taurus might lean a bit toward that homebody life, but that doesn’t mean they shy away from adventure — they just like to do it in comfort and style. These two love to travel together and see all the world has to offer, they just prefer to do it in places they can count on high thread-count sheets. They have an appreciation for great food, music, and art, so they love to take sensual journeys to places they can soak in all the culture.

They love to take care of the people they love.

While Taurus is more well-known for their warm heart, don't let Virgo’s critical side confuse you. While this sign might have high standards, they love to take care of the people in their lives. Both signs are natural nurturers who go out of their way to be a support system for their partner. Taurus, however, does expect to be spoiled a bit more than practical Virgo. Each of these signs gets attached when they're in love, and, when they give their heart, they're in it for the long haul.

What does all this mean for Adele and Skepta? If it turns out these two really are a couple and not just teasing fans with their online flirtation, they have the makings of a true power couple who could truly be endgame for each other. Now that is a duet anyone can get behind.