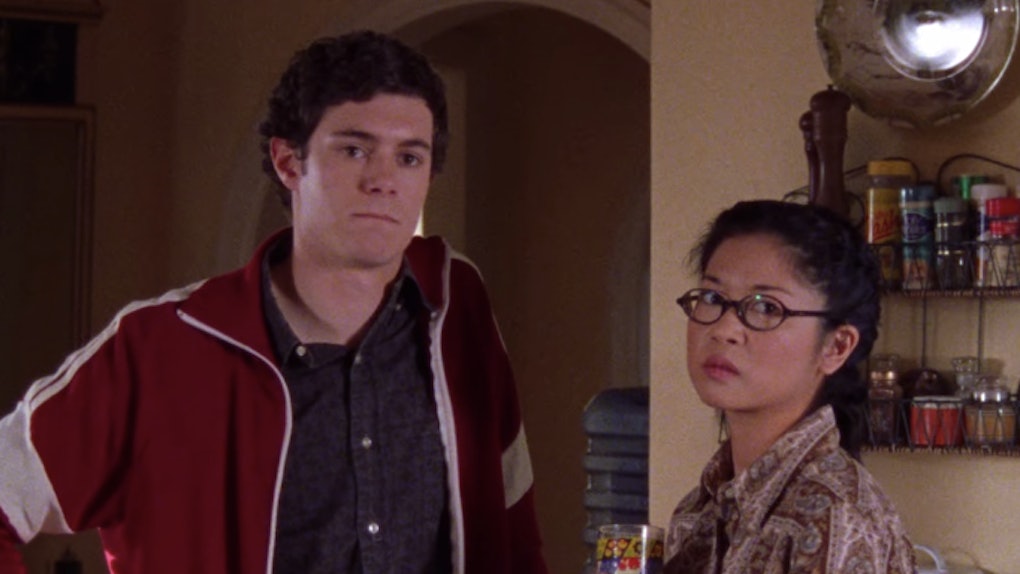 Most hardcore Gilmore Girls fans are probably in the middle of their third or fourth rewatch of the classic series on Netflix by now. For all the fans who are looking for some fresh Gilmore Girls content, the stars of the show have got you covered. Adam Brody and Keiko Agena had a Gilmore Girls reunion on IG Live, and it was filled with love for Stars Hollow.

On Thursday, Sept. 24, Brody and Agena met up on IG Live to reminisce about their days on Gilmore Girls. Agena is best known for her regular role on the series as Rory Gilmore's (Alexis Bledel) best friend Lane Kim, and Brody played Lane’s boyfriend, Dave Rygalski, in Season 3. The former co-stars got together for the 50-minute IG Live video to encourage fans to vote as part of the nonprofit initiative Vote Forward, and also to answer some questions about their time on the beloved series.

Before they got going with the Gilmore Girls fun facts, the duo talked about getting involved in the 2020 election. Brody said "it's cathartic" to get involved, adding, "I feel like I can breathe easier after." Agena, who said she's written over 900 letters to potential voters, shared her message to them: "There are real world impacts that will have immediate effects on our lives today. Your vote is important. Make sure you’re heard.”

Brody and Agena also spent some time answering fans' questions about Gilmore Girls. When Brody was asked if he's Team Dean, Team Jess, or Team Logan, he turned to Agena for help. "That should be your question because you definitely know that quadrangle better than me," he said, noting the fact that Agena spent much more time on the series than he did. Agena gave her allegiance to Milo Ventimiglia's character and said she's Team Jess, while Brody eventually sided with Team Logan since the character shares a name with his brother-in-law.

They also discussed their time on the Gilmore Girls Stars Hollow set, which was actually located on the Warner Brothers studio lot in Los Angeles. "You see in all the movies growing up, movies about making movies, and it’s always Warner Brothers, these fake cities on studios," Brody explained. "And there was something thrilling to me and cozy and kid-like about being in this suburb on this lot in the middle of the night.”

You can still check out the mini-Gilmore Girls reunion on Agena's Instagram to see the reunion for yourself.