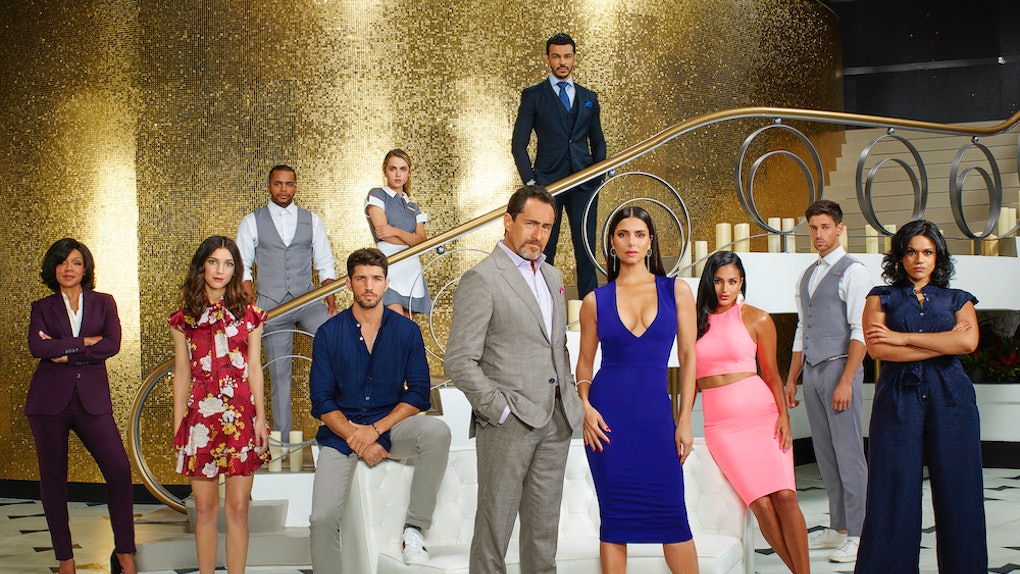 Within the first five minutes of ABC’s new drama Grand Hotel, it’s obvious that Latinxs and people of color take center stage. It’s not the first (and probably won’t be the last) TV show to spotlight Latinx culture ⁠— Jane The Virgin, now on its final season, has been doing it successfully since 2014, and Netflix’s One Day At A Time, while since canceled, garnered critical acclaim for its powerful Latinx representation. But this show does something different. It tells an “upstairs/downstairs” (a term coined from a ‘70s British TV show about servants who lived “downstairs” and their masters who lived “upstairs”) story, where Latinxs are, refreshingly, the ones upstairs. In the case of Grand Hotel, they’re in the penthouse, to be exact.

The show, based closely off a short-lived Spanish series called Gran Hotel, is set in Miami, Florida ⁠— a melting pot destination for Latinxs of every color and country — at the Riviera Grand Hotel (inspired by the famous Fontainebleau Hotel in Miami Beach). It follows the wealthy Mendoza family, the owners of the Riviera Grand, as oldest daughter Alicia tries to save the hotel from those who want to see it, and her family, fail. There’s also the issue of a line cook’s mysterious disappearance, which was central to the plot of the original Spanish series. It’s juicy, colorful, and authentic to Miami culture, and in turn, Latinx culture. With Eva Longoria at the helm as an executive producer and cast member, the show’s authenticity isn’t surprising. Longoria has long been an advocate for Latinx representation on screen.

“It was important to cast this show authentic to the world it was set in, which was Miami, and so of course the show’s going to have Latinxs in it because you can’t see Miami without seeing Latinos,” Longoria tells me at the show’s premiere party at the Fontainebleau on Monday, June 10. The show stars several noteworthy Latinx actors, including Roselyn Sanchez and Demián Bichir, who have historically acted in Latinx-centered films, shows, and dramas. But the way in which audiences will see Latinxs on Grand Hotel is unique, because the show doesn’t stereotype or harp on the same tired cultural tropes. It’s dramatic, yes, but showrunners could’ve easily told the exact same story just as effectively with an all-white cast, if they’d wanted to. In the case of Grand Hotel, you don’t see Latinx actors playing stereotypical Latinx characters. You just see them playing characters who happen to be Latinxs. They’re people of color, they eat pastelitos, and they have accents — the kind of things that might seem small, but that make it easy for Latinxs to recognize themselves on screen. With character names like Yoli, Santiago, and Javi, the Latinx-ness doesn’t feel forced. It just exists.

“Even though we are a very ethnically diverse cast, that really has little to nothing to do with the actual premise, and that I think is sort of the difference between this show and other shows,” Denyse Tontz, who plays Alicia, tells Elite Daily. “Nobody is playing a stereotypical role in any way. We’ve got the upstairs/downstairs thing, but really, it’s about the characters and just getting to know their lives and loving them.”

This might just be what sets Grand Hotel up for success and keeps it from falling into the same fate as previous shows that have spotlighted Latinxs. It’s not that shows about Latinx culture fail because they’re about Latinx culture. They fail because Latinxs want to see themselves represented, not stereotyped. Jane The Virgin, while heavy with telenovela-like charm and references to Latinx culture, is ultimately a coming-of-age love story about family. It’s celebratory of Latinx culture while still dealing with important issues like immigration and mental health, but it’s not obnoxious, offensive, or negative. Anyone, not just Latinxs, can relate to it. The long-running George Lopez lasted for six seasons from 2002 to 2007, won an Emmy Award, and ultimately told the story of a normal family dealing with normal family issues — almost like Full House, but with people of color.

“It’s delicious and dramatic and romantic, and you’re dealing with all these universal themes: It’s family, it’s business, it’s a family business,” Longoria tells the audience during a panel-style Q&A at the premiere of Grand Hotel, about the new show. “People may think this is a Latinx show. It’s a show about Latinxs, but it’s for everybody.”

Ultimately, television is an industry. In order for shows that feature Latinx casts and tell Latinx stories to succeed, people need to watch, which is part of the reason the cult-following One Day At A Time had was just not enough. The show was canceled in March 2019 after three seasons on Netflix. At the 2019 Code Conference in Scottsdale, Arizona, on June 11, Cindy Holland, Netflix’s VP of Content, said the show simply didn’t have a wide enough viewership. “The basic calculation is, how much viewing are we getting for what it costs?” Holland said, according to Digital Spy. “We also look at, is it reaching different audiences? Is it gaining critical acclaim? Is it doing something for us as a business that we like?” She went on to explain that ultimately, Netflix wouldn’t have renewed the show on a “viewing-to-cost” basis, because they “couldn’t find the broad audience we hoped it could get and it deserved to get.”

So, where are Latinx audiences? Based on the United States Census Bureau, Latinxs made up about 18% of the U.S. population in 2018. According to The Latino Media Gap: A Report On The State Of Latinos In U.S. Media, a 2014 study commissioned by the National Association Of Latino Independent Producers, Columbia University, and the National Hispanic Foundation for the Arts, they make up about 20% of the 18-34 marketing demographic. According to that same study, they also attend more movies and listen to the radio more frequently than any other racial or ethnic group in the U.S. But despite all this growth, there are fewer stories about Latinxs and Latinx lead actors in the entertainment industry today than there were 70 years ago.

When we do get to see Latinxs on screen, they are often pigeonholed into the same types of roles: law-enforcers, criminals, cheap labor, or in some sort of hyper-sexualized role. According to the same study, from 2012 to 2013, 17.7% of Latinx film characters and 24.2% of TV characters were linked to crime, and 36.6% of Latinx TV character appearances are in law enforcement.

According to The Opportunity Agenda’s Power Of Pop study published in 2017, between April 2014 and June 2016, only 25% of Latinx immigrants were “depicted in any discernible occupation, whereas the remaining 75% of Latino characters were represented as incarcerated, or the victims/perpetrators of criminal activity, specifically human trafficking and drug trafficking.”

“Representation matters,” Longoria tells Elite Daily. “What you see in the media not only informs others about our community, it informs our community about how we see ourselves, and that’s the more dangerous part of seeing negative portrayals.”

Grand Hotel gives us more. It gives us the opportunity to see Latinx characters fulfilling the American dream (which is what many Latinxs always wanted to begin with), while still telling a story that isn’t exclusively Latinx. Non-hispanic audiences will still “get it,” and they’ll get sucked into the mystery and the drama that comes with the ritzy Miami lifestyle.

“This show is doing it,” Longoria says, about not only lifting up Latinx characters on-screen, but also prioritizing a crew of diverse women off-camera. During the panel Q&A, she notes that the show’s cinematographer, editors, stunt coordinator, directors, and writer’s room all comprise of women and culturally diverse individuals. “You have to show up,” she continues. “You have to watch. Because if we don’t show people the hispanic buying power and the hispanic influence, then they will not make more shows like this.”