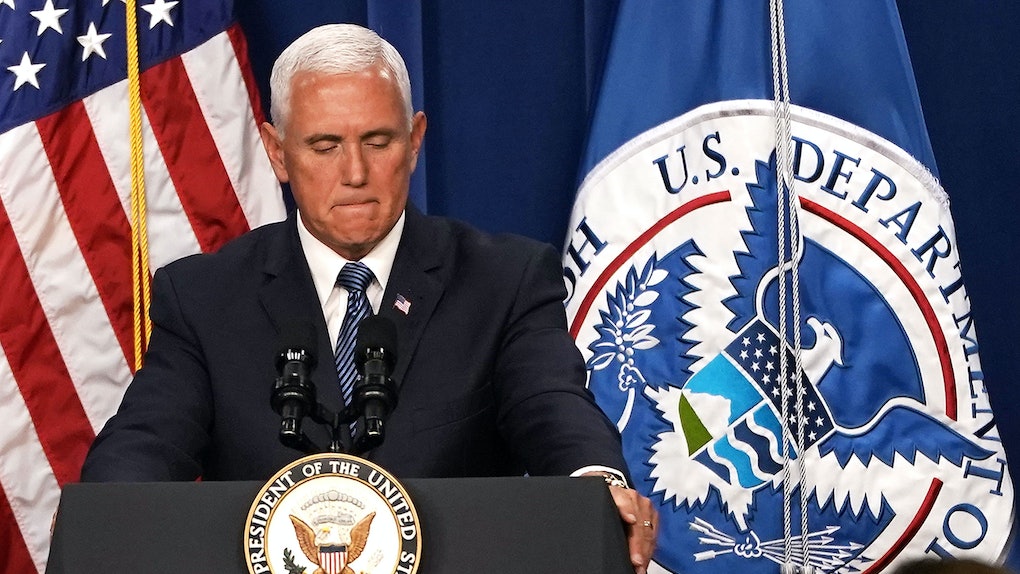 First, Mike Pence greeted his audience of about 500 people: "Well, hello, Missouri! And from the other side of the state line, hello, Kansas!" Then, the vice president began his address. But before he could even get through his first sentence, a protester cut off Mike Pence's speech to shout and ask, "where are the children?"

The moment happened on Wednesday afternoon, July 11. The setting? The Marriott Hotel in downtown Kansas City, where the vice president spoke at an event dedicated to tax cuts.

The protestor, however, wanted to start another discussion.

"Mike, where are the children?" the protestor asked. "Shame on you." The protester was then ushered away from the audience by security, just as abruptly as he had interjected the speech moments earlier.

The protestor didn't much need time to elaborate, though. It was clear what his point was.

Just a day before, a federal judge ordered the Trump administration to reunite 59 migrant children with their families "today or within the immediate proximity of today," according to Politico. All 59 of the children are under the age of five and were separated from their guardians after the crossing the United States' southern border. In total, the government had 102 children under the age of five who had forcibly been separated from their parents.

"These are firm deadlines." U.S. District Court Judge Dana Sabraw said at a hearing in San Diego on Tuesday. "They are not aspirational goals."

The firm deadline was not met. On Tuesday, CNN reported that less than half of the children the federal government had been ordered to return to their parents were, in fact, returned.

The next day, the protestor confronted Mike Pence during his Kansas City speech. In response, audience members shouted boos and chanted "USA! USA!" as the protestor was ushered away.

Afterwards, Pence continued with his speech.

"It really is great to be back," he said, as the crowd reacted with laughter. "Great to be back in Kansas City, a city where the men and women elected a Congress and a President who enacted historic tax cuts that are putting America first and putting Americans back to work."

Footage of the moment, captured by ABC News, can be seen below.

On Wednesday night, the Trump administration said that it would reunite all children under the age of five with parents by Thursday morning, per ABC News.

The Trump administration's failure to meet a court mandated deadline to reunite dozens of children with parents might serve as a preview to how complicated further reunifications will be throughout the summer.

During a conference call with reports, however, one HHS official defended the pace at which the reunification are occurring.

"Our process may not be as quick as some would like, but there is no question that it is protecting children," Chris Meekins, the chief of staff for the HHS' Office of the Assistant Secretary for Preparedness and Response, said during the call, per CNN. "Let me be clear, HHS could have transferred every child out of ORR [Office of Refugee Resettlement] care to a parent who is in DHS custody today if we did not take into account child safety or if the adult is actually a parent."

Among the complications that have been reported is one case in which the government says it has no information about the parents of a 3-year-old child. The government now believes that the child "may have U.S. citizen parents and was placed in the wrong system," per ABC News.

It remains unclear what will happen to the 3-year-old, or the hundreds of other migrant children in U.S. custody without their parents.