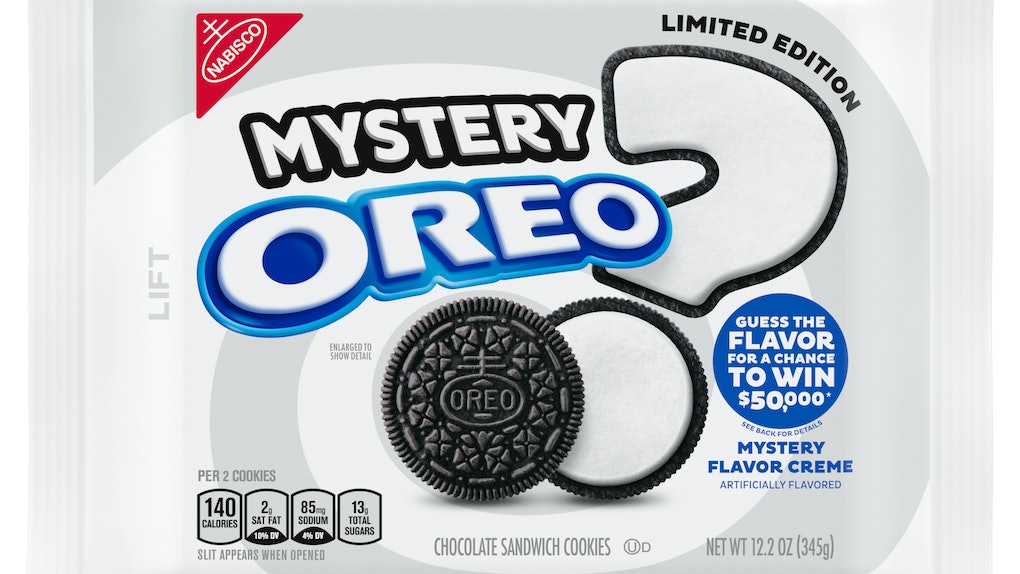 A New Mystery Oreo Flavor For 2019 Is Coming Soon, So Get Ready To Play Detective

Oreo lovers, get your tastebuds ready, because you could potentially make serious bank from sampling a mysterious new twist on the creme-filled wafers that you know and love. It's no secret that Oreo loves to experiment when it comes to changing up the filling in between the two chocolate cookies (Marshmallow Moon, Mint Chocolate, and S’Mores Oreos, anyone?), and they're helping adventurous fans get in on the fun and potentially score some serious cash, like tens of thousands of dollars, from doing it. According to the company, a new Mystery Oreo flavor for 2019 will be hitting shelves in the coming days, and one lucky taster will be $50,000 richer from trying it out. Here's how it'll all go down.

According to press materials shared with Elite Daily on Thursday, Sept. 12, the company will be debuting a brand new "mystery" flavor starting on Sept. 16 and will be asking for the help of Oreo connoisseurs to help "crack the case." The successful taster will receive $50,000 in cash, which is just an extra incentive to dig into a pack of Oreos, IMHO. If you've ever wanted to play detective, now's the time to do so, because you can head to the store and pick up a 12.2-ounce package of the unmarked wafers to try starting on Sept. 16. The cookies themselves will apparently look just like the OGs with a black and white design, but one bite and you'll realize that you're dealing with something very different. I have a feeling that the flavor will be hard to place, as the press materials hint that the "Mystery Oreo could be anything, from a combination of two current OREO flavors to an entirely new flavor."

Before you start stressing out (after all, $50,000 is on the line), I'd keep in mind that the company will be offering you some hints so that you have some clues when making your guesses. In addition to being able to actually taste the creme filling, the company will reportedly be dropping three different kinds of Mystery Oreo packages that contain different hints on each one. In short, I'd make sure you buy at least three of these mystery packs to make sure that you have all the information possible. In addition, Oreo will be taking to its Facebook page and www.MysteryOreo.com each week as part of its #MysteryMonday series. I'd make sure to set a reminder so that you can tune in and channel your inner super-sleuth.

At this point, you might be wondering how you can submit your guesses and how many chances you have. Oreo devotees basically have from Sept. 16 through Nov. 10 (which is basically two months) to head to www.MysteryOreo.com and submit your guess. Each correct guess will be entered into the $50,000 sweepstakes, and one lucky person will be chosen from that pot at the end to walk away with the jackpot.

If you're trying to decide between a few different options, don't worry, as you can submit a new entry every day. I did the math, and that means you have at least 56 chances to make the correct guess. In addition, you can score an extra entry when a friend you refer makes a guess as well.

Unfortunately, you have to wait until the Mystery Oreo debuts on Monday, Sept. 16 to get started, but Stranger Things actor Gaten Matarazzo is getting the sleuthing started a little early by digging into his pack and revealing that he's catching some notes of cinnamon. Could it be a French toast-inspired flavor? Or an offering that takes its flavor cues from some other baked good? You'll have to try it for yourself when it launches at stores on Sept. 16.

More like this
Baskin-Robbins' May 2021 Flavor, Non-Dairy Strawberry Streusel, Is An Oat Milk-Based Treat
By Lara Walsh
Here's Where To Buy Naturdays Pineapple Lemonade Beer To Unleash Your Summer Vibes
By Cianna Garrison
How Long Is Pepsi Blue Available? Don't Wait To Sip The Colorful Cola
By Cianna Garrison
Stay up to date