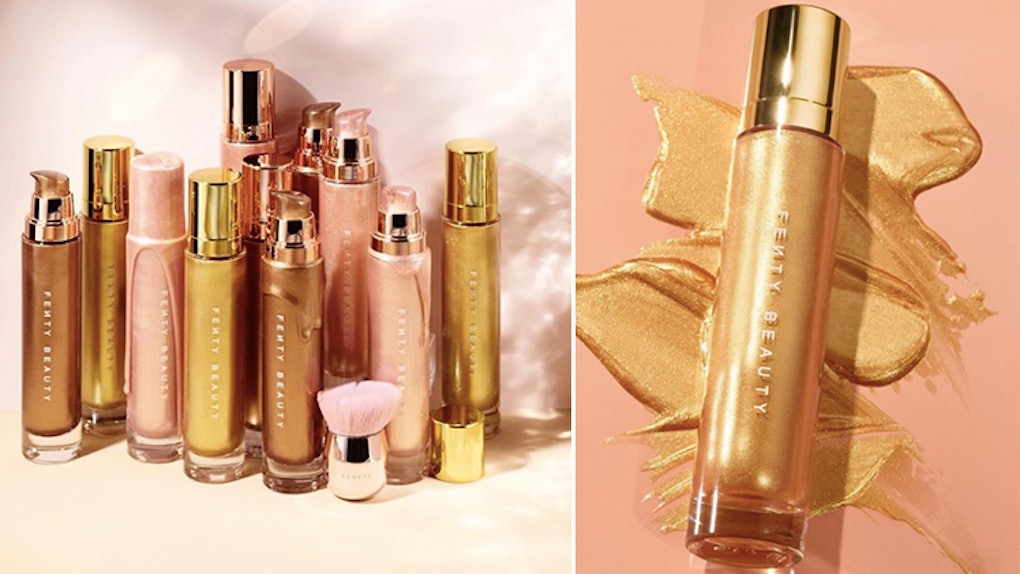 A New Fenty Beauty Body Lava Shade Is Here, So You Know Summer's About To Glow Down

If you've been waiting all winter long to take time off to exchange your rainy, snowy outlook for some much-needed sunshine, you know as well as I do that's usually easier said than done. But while getting away might feel impossible at times, that doesn't mean you can't flaunt a back-from-Barbados glow right now without ever leaving your couch. That's all thanks to a new Fenty Beauty Body Lava shade that just dropped which is almost better than an actual vacation.

Last year, Body Lava made its official debut in a viral video from Fenty's front lady, Rihanna. The video showed RiRi applying the product onto her shoulder ever so sensually. She started with a few pumps of the shade Who Needs Clothes dispensed directly onto her skin, then used the brand's kabuki brush to slather it on. It was such a mood, fans that legions of fans spoofed the video in what became the hilarious #RihannaChallenge.

This time around, just as she did for the initial release, Rihanna took to her Instagram again to make yet another announcement about the brand's glowiest product. She surprised followers with the news that Body Lava would be returning in a new (but actually familiar) shade. Chances are that if you know Fenty, then you already know about Fenty Beauty's glittery gold Trophy Wife Highlighter. (For those of you who don't know and therefore may be living under a rock, the shade is a true gold, super sparkly highlighter that's gained cult status among Fenty fans.) So prepare yourselves for what I'm about to say next, because the newest launch from the brand boils down to basically this: if Trophy Wife Highlighter and the Body Lava Luminizer had a baby, the result would be this luxurious golden child.

That's right, Body Lava now comes in the shade Trophy Wife — and it's not even your birthday.

The brand shared a post on their Instagram of three models of different skin tones swatching the new shade in a camera angle that feels a lot like Rihanna's 2018 #RihannaChallenge video. In the caption, the brand wrote, "we know y'all love that #TROPHYWIFE 🏆✨, now get ready to bathe in it with #BODYLAVA!"

And if you're feeling like you can't wait another minute to pour it up, Fenty also announced the spinoff of two of their sparkliest and most beloved products comes without a countdown. Yep. That means the new product is already available online and at your local Sephora.

And the sparkly surprises don't stop there. Fenty Beauty brought back the original shades, Brown Sugar and Who Needs Clothes, in all their glittery glory. But here's where things get really exciting — the brand is also offering the Body Lava To The Max Set, a trio of all three full-size body-illuminizing shades plus the Face & Body Kabuki Brush all packaged together. It'll cost you a cool $211, but just think of the glow you'll get — no plane ticket or vacation request necessary.

If you can't decide between the three shades or the full set, I hate to break it to you, but you need to know you don't have much time to think on it. Just like the initial release, these Body Lava products are limited edition. So while it might be available now, there's no telling how long it will stay available. And when it's gone, there's no telling when (or if) it will come back.

My advice: don't risk your opportunity to shine bright like a diamond all spring and summer long.