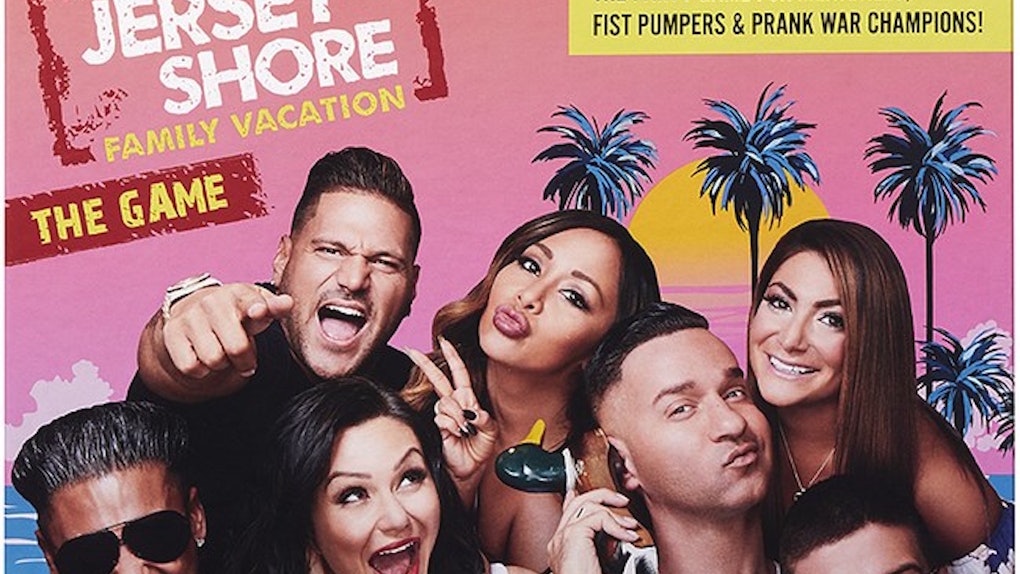 The Jersey Shore experience is being boxed and sold online, so now you too can party like a true guido... even if you do not feel like going out and starting a bar fight. Mattel just announced that the toy company has created a Jersey Shore Family Vacation board game that will bring all the fun and drama of the MTV reunion series into your living room. So whether you completely relate to Snooki or you are the DJ Pauly D of your friend group, now you can live out all your fist-pumping dreams next game night.

The new board game is simply called "Jersey Shore Family Vacation: The Game," and it is a trivia style board game that tests players' knowledge of all the iconic moments, people, and sayings that have made Jersey Shore and its currently airing reboot series such pop culture touchstones. To win, players will have to answer question about Ron Ron Juice, Sunday dinners, and other mainstays of the series, while earning bonus points for completing a "Gym," "Tan," and "Laundry" triumvirate. That's right — you are going to have to GTL your way to the top.

The game is designed for two to four players and carries an 18+ age restriction. Take a look at the game's box design below:

"Jersey Shore Family Vacation: The Game" is not out just yet, but it will become available for purchase on Amazon for $19.99 later this month, just in time for the holidays. Ray Adler, the senior director of global games at Mattel, emphasized why the game would make a perfect present for the reality TV-obsessed friend or family member of yours:

At Mattel, we are always looking for culturally relevant trends and fan-favorites, such as Jersey Shore, to inspire our games and bring to life an engaging play experience. The game is the perfect gift for any fan this holiday season and is sure to bring laughs, and maybe some drama, just like the show.

To create the game, Mattel worked closely with the product department within Viacom, the media conglomerate that produces Jersey Shore Family Vacation. Jen Caveza, the senior vice president of toys at Viacom Nickelodeon Consumer Products, noted how much of the personalities from the show they were able to add to this board game:

Jersey Shore Family Vacation hit the cultural zeitgeist again when it returned to MTV, and we worked with Mattel to create a game that captured the iconic moments and big personalities from the show. This game is a great way for fans to play along with the Jersey Shore crew in their own home.

Although it is pretty unique for a TV show (especially a reality show) to get its own board game, it should not be too surprising that Jersey Shore Family Vacation is popular enough to spin off into different media. The reboot series returned as a hit for MTV, much like the iconic original series. Family Vacation just aired its second season finale earlier this month and has already been picked up for a third season to air in 2019.