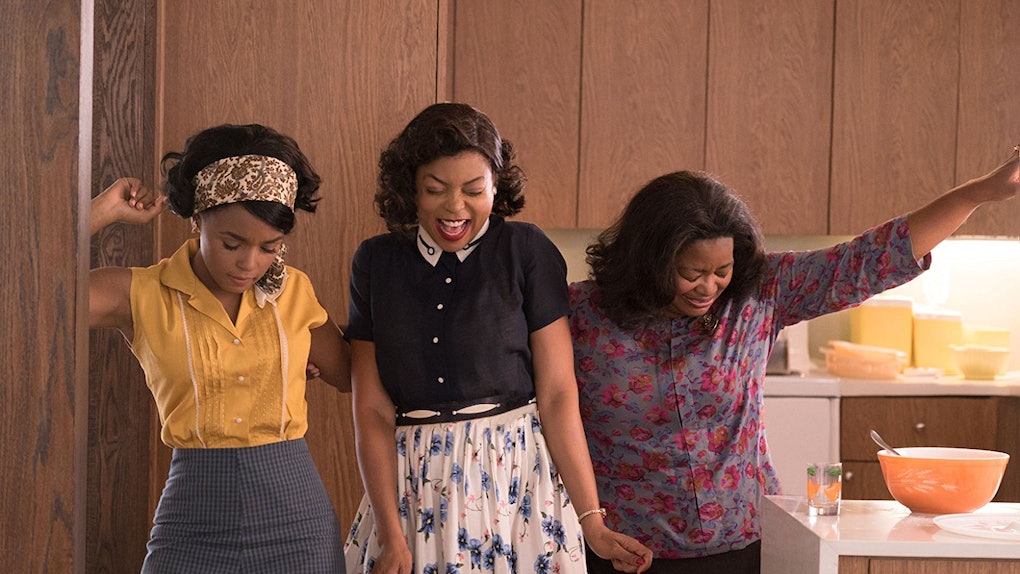 Break out your calculators, because Hidden Figures is making a comeback. The hit 2016 movie is now being turned into a scripted series on Nat Geo, and while there's no word on whether the film's star-studded cast will be involved, you know that the Hidden Figures series is about to be amazing. I mean, the tale of three black female mathematicians taking NASA by storm in the 1960s is exactly the kind of diversity I'm looking for in my TV lineup. Plus, their real-life story is just plain bad ass.

According to Variety, the Hidden Figures series will come from Peter Chernin and Jenno Topping of Chernin Entertainment, both of whom executive produced the movie. So yeah, you could say these two know a little bit about the Hidden Figures universe. The Nat Geo series is still in the early stages of development — so we don't know how it will differ from the movie or if we'll get some more Taraji P. Henson — but like the movie, it will draw upon Margot Lee Shetterly's book, Hidden Figures: The American Dream and the Untold Story of the Black Women Who Helped Win the Space Race. And like the movie, the series will focus on the intersection of racism, sexism, and science.

The Hidden Figures movie picks up the story of Katherine Goble Johnson (Henson), Mary Johnson (Jenelle Monáe), and Dorothy Vaughan (Octavia Spencer) in 1961, when the three women were working as "human computers" at NASA's Langley Research Center in Hampton, Virginia. The women constantly battle the racism and sexism of their mostly white, mostly male counterparts, but they don't let these obstacles prevent them from excelling in their work. Ultimately, the three women — especially Johnson — help NASA to safely orbit John Glen's Friendship 7 around the Earth three times, making him the American to do so. The film ends with Glen's safe landing, but an epilogue reveals that Johnson continued her work at NASA and helped calculate trajectories for major NASA projects like the Apollo 11 moon landing. In 2015, Johnson was awarded the Presidential Medal of Freedom for her successful career.

This is an incredibly compelling story, no doubt — it was nominated for numerous awards, including three Oscars — but there is even more to the story for the Hidden Figures series to explore. Shetterly's book begins about twenty years earlier than the movie, during World War II, and includes a fourth protagonist: Christine Darden, an expert researcher in supersonic flight and sonic booms. Darden had a 40-plus year career at NASA, and after years of success, she became the first African-American woman promoted to the Senior Executive Service, a high-ranking designation in the federal government. Darden is fascinating, so it wouldn't be surprising if Nat Geo chose to add her into the Hidden Figures mix even though she's less familiar to audiences than the three women who were featured in the movie.

Another option for Nat Geo would be to begin the narrative during WWII and follow the main characters throughout their entire careers. This strategy would definitely differentiate the show from the movie, as viewers would get to know the "human computers" and experience their dynamic from the start, rather than at the midway point in their careers. Wouldn't you watch an entire show about Dorothy Vaughan and the "colored group" of mathematicians? Add Octavia Spencer back into the mix and Nat Geo has a ratings gold mine on their hands.

Of course, Nat Geo is still sorting all this out, so we probably won't know for a while if any of the Hidden Figures film cast will appear in the show. And it will likely be even longer until we have any sort of premiere date. But who really cares, because any new Hidden Figures stories are a good thing, right?