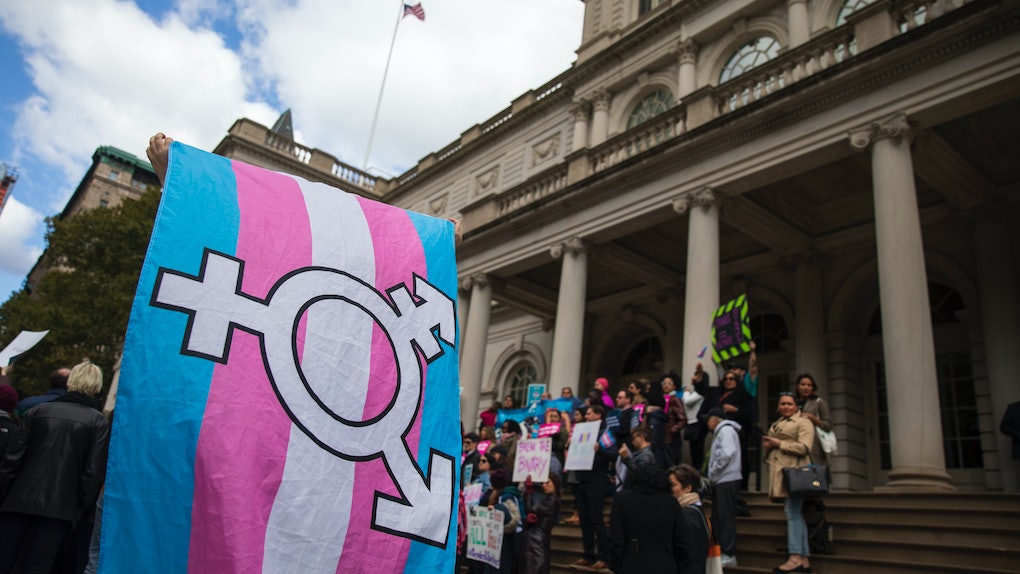 The last day of March marks an important international day: Transgender Day of Visibility. According to the Human Rights Campaign, Transgender Day of Visibility is is both a time to celebrate transgender people around the world and the courage it takes to live authentically, as well as a time to raise awareness about the discrimination and violence transgender people still face everyday across the globe. In honor of this annual day, here are nine trans rights activists you should know about, whose contributions in their respective fields are pushing the envelope, changing how the world talks about transgender and non-binary folks, and centering transgender narratives.

But first, a little about Transgender Day of Visibility. A transgender individual is someone whose gender identity doesn’t align with the sex they were assigned at birth. According Them, an online LGBTQ-focused magazine, Transgender Day of Visibility was established a decade ago by trans activist Rachel Crandall. A youth-led organization called Trans Student Educational Resources notes that the day "aims to bring attention to the accomplishments of trans people around the globe while fighting cissexism and transphobia by spreading knowledge of the trans community." The organization also has an infographic showing why trans people need more visibility and what happens when communities don't have visibility or representation, like bullying at school, job discrimination, partner violence, and a lack of mental health resources.

Here are nine trans and non-binary activists whose work you should know on this important day.

AC Dumlao is the Program Manager at the Transgender Legal Defense and Education Fund (TLDEF) where they manage TLDEF's Name Change Project and lead the Education department where they lead trans cultural competency presentations and workshops. "They are a queer transgender non-binary first-generation American and child of Filipino immigrants," according to their website. Dumlao created the Facebook page "Call Me They," which provides resources for trans and non-binary people, posts articles and graphics about what it means to be trans and non-binary, and allows Dumlao to share their own thoughts and writing on the topic. In their paid work, Dumlao connects low-income trans and non-binary people with lawyers who provide free representation during the legal name change process in court. Plus, their selfie game on their Instagram, @menswearselfcare, is incredibly good — and their photos always have heartwarming and inspirational captions.

Alok is an artist, educator, and writer whose writing and activism has greatly influenced trans and queer people. They frequently write about beauty standards, feminism and the patriarchy, and share articles on their Facebook with critical commentary. Much of Alok's poetry, which tackles trans identity, whiteness, and beauty can be found on YouTube. Alok identifies as gender non-conforming, meaning someone who doesn't adhere to the "male/female" binary and transfeminine, which some people describe as identifying more with femininity than masculinity, but not necessarily identifying with one gender more than another. Visit Alok's Instagram @alokvmenon to see their gorgeous outfits, affirmations, and activism in action.

You may know Angelica Ross from her role as Candy on the FX show Pose, but she's also a businesswoman and activist. Ross is the President of Miss Ross, Inc and a founder of TransTech Social Enterprises a program that helps marginalized communities lift themselves out of poverty through training. As a transgender woman of color, she's previously opened up about her struggle to understand that you could "change [your] body to match how [you] felt on the inside," as she told Self in 2015. She also has a podcast called "Like A Butterfly" to lead up to the release of her book, Like A Butterfly: Leaving the Cocoon. In her description for the podcast, she writes, "I'm writing this book in hopes that my story will help guide trans folks as well as our family members, friends, lovers and anyone else who recognizes that our society has changed and that we too must change with it."

Raquel Willis is a Black, queer, transgender activist who was a former organizer for Transgender Law Center and is currently the Executive Editor of Out Magazine. In a HuffPost Black Voices Video, Willis says, "I am Raquel Willis. I am Executive Editor at Out Magazine, a writer, and an activist and I have built new possibilities for marginalized people. I have built morale amongst trans women of color." A lot of Willis' activism comes in the form of writing. In her articles and blog posts, she talks about the importance of media representing trans people of color, other transgender visionaries and advocates, and her visions of liberation. In 2017, she delivered a powerful speech at the Women's March on Washington where she spoke about rights for indigenous people, sex workers, Black people, trans people, and people with disabilities.

Jennicet Gutiérrez is a trans rights and immigrants rights activist who became made headlines in 2015 when, according to The New York Times, she interrupted President Obama at a White House LGBT pride event to advocate for LGBTQ immigrants in detention, where transgender women were being housed in men's detention centers. Though she was removed by White House staff, Gutiérrez, a transgender woman, became an important figure in the LGBTQ community, as well as immigrant's rights communities after that moment. Gutiérrez is currently a community organizer at the Los Angeles-based organization, Familia: Trans Queer Liberation Movement, which aims to "achieve the collective liberation of trans, queer, and gender nonconforming Latinxs," according to the Familia website. If you care about trans Latinx issues and other issues that impact immigrant LGBTQ communities, follow her Twitter at @JennicetG.

Mia Yamamoto is a criminal defense attorney and Japanese American transgender women who was born in an internment camp in the 1940s. After graduating from UCLA's School of Law, she started her journey as a trans woman. Not only has she represented transgender people in civil rights cases, but she is a co-founder of the Multi-Cultural Bar Alliance (a coalition of minority, women’s, and LGBT bar associations in LA), she has served on the commission on Sexual Orientation and Gender Identity for the American Bar Association, and she was honored by API Equality and the Los Angeles County Human Relations Commission for her advocacy on behalf of the LGBT community. In a Broadly interview from 2018, she said, "Every trans person should aspire to everything ... all those things are going to be available because people fought for us, people advocated for us, people opened doors and made space for us."

Sarah McBride is a trans activist who currently works as the National Press Secretary of the Human Rights Campaign. In 2012, she made headlines when she came out as trans while serving as the student body president at American University. Last year, McBride published a book with a forward by Joe Biden called Tomorrow Will Be Different. It's about her work as an activist, the key issues she believes people must consider when fighting for trans equality, and a look at the road ahead for trans liberation. She also was the first transgender person to ever speak at a Democratic National Convention, where she delivered a powerful speech on progress and identity. At the end of her speech, McBride ended with hope for the future when she shared, "Today in America, LGBTQ people are targeted by hate that lives in both laws and hearts. Many still struggle just to get by. But I believe tomorrow can be different. Tomorrow, we can be respected and protected."

Tyler Ford is a writer and the former deputy editor of the popular LGBTQ publication, Them. Ford has written pieces about their own life as a trans person, all-gender fashion, and their activism for trans rights including marching and organizing in the streets to protest anti-trans Trump administration memos and policies. Their website notes, "Tyler’s sphere of influence is wide, reaching hundreds of thousands of readers and helping LGBTQ+ people feel more equipped to express themselves with confidence."

Jacob Tobia first made their debut when they were interviewed by Laverne Cox on MTV's documentary about the lives of transgender people, The T Word. Identifying as genderqueer, they are a comedian, actor, writer, and producer and author of the recent memoir, Sissy: A Coming-of-Gender Story, where they talk about what it was like growing up in a binary world as a person who is outside of the gender binary. They've talked about the importance of equality with former U.S. presidents, filmed a video talking about radical affirmations for Lady Gaga's Born This Way foundation, and appeared on The Daily Show with Trevor Noah where they talked about the idea of being "gender chill." Follow them on Instagram at @jacobtobia for incredibly slick outfits, book updates, and interviews.

These nine trans and non-binary figures are contributing to trans visibility with their open and honest approach to sharing their lives. Furthermore, each one of them are taking actions to get one step closer to equality and accurate representation for transgender individuals everywhere. Whether you're trans, non-binary, or cis, everyone can learn so much from their experiences and stories.

More like this
Lil Nas X Is Going To Hell & He’s Making That Sh*t Gay
By Ciarra Jones
Skateboarder Brighton Zeuner Never Thought She Could End Up At The Olympics
By Rhyma Castillo
Why Don't I Have TikTok's "Celebrity" Shapeshifting Filter? It Depends On This 1 Thing
By Lara Walsh
Stay up to date