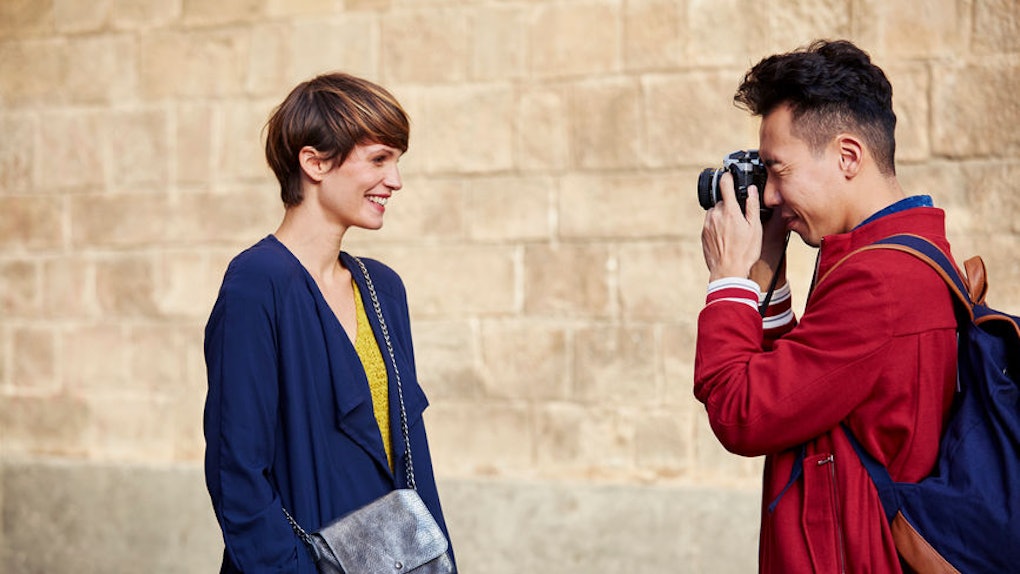 9 Signs You Have An Instagram Boyfriend, So DM This His Way

Becoming an "Instagram boyfriend" has become a fully fledged Thing with a capital T. You know what I'm talking about — you've seen the guy faithfully (or begrudgingly) snapping away as his girlfriend artfully poses at brunch. And a new study released by Adobe that surveyed 1,000 American millennials who use Instagram at least weekly, explored the signs you have an Instagram Boyfriend.

Furthermore, another 87 percent say that taking pictures of their significant other or friends while they travel makes the experience more fun and memorable for them. So, don't feel bad about making your SO snap those pictures of you looking out into the distance during your beach vacation. They're probably actually enjoying the process.

Specifically, based on the study's findings, we were able to boil it down to nine primary responsibilities. If your partner does all nine of these things, send them this article ASAP, because they are officially an Instagram Boyfriend or Girlfriend and should be notified immediately.

Sign 1: They take pictures and videos of you (duh).

Obviously, the main duty of an Instagram Boyfriend or Girlfriend is to take pictures of their bae. In fact, the study found that 45 percent of Instgram users have taken pictures for their significant others at some point.

But to truly qualify as an Instagram Boyfriend or Girlfriend, you've got to do way more than snapping a few casual pictures here and there. Dedication is key.

Sign 2: They've gone hungry to help you get the perfect food pic.

Has your SO gone hungry in order to get that perfect shot for you? Well, if they have, they're not alone. In fact, the study found that a third of the Insta boyfriends they surveyed have gone hungry or had a meal go cold while they were focused on capturing the shot.

Sign 4: They take multiple pictures when you ask them to snap a shot.

This isn't amateur hour. A real Instagram Boyfriend or Girlfriend knows that when you ask them to "take a picture" of you, you don't actually mean you want just one picture. You want as many snaps as it takes to get the perfect shot. In fact, 90 percent of millennial Instagram users take two or more photos to get a photo worth posting. And 36 percent are even more devoted by taking at least five shots.

Sign 5: They've overcome physical barriers to get the perfect pic of you.

No, seriously. Almost half (46 percent) of male Millennial Instagram users responded in the survey that they have climbed on top of something to get a good pic of their significant others.

Sign 6: They've laid on the floor to get the shot.

And the truly devoted ones have even laid on the floor to get some especially cool angles for their baes. In fact, two out of five of them admitted to having done so at some point.

Sign 7: They've made a fool of himself in public to get the shot.

With all that lying on the floor and climbing over things, it's only natural that Instagram Boyfriends and Girlfriends are going to sacrifice some of their own dignity to help you look cool. So much so that 39 percent of them admitted to embarrassing themselves in front of strangers to get the best shot of their significant other or friend.

Sign 8: They're posting a Valentine's Day tribute to you.

Let's not forget that a truly good Instagram Boyfriend or Girlfriend also has their own following that he needs to cater to. And that means that come Feb. 14, they're going to be posting an adorable Valentine's Day tribute to none other than you. In fact, 88 percent of Millennial Instagram users post a picture or video of their partner on Valentine's Day.

Having your own account obviously doesn't necessarily mean you have total free reign over what you posts. A truly wise Instagram Boyfriend or Girlfriend knows that whatever's planning on posting of you on Valentine's Day (and any other day) has to be approved by you. The study actually found that 57 percent of male millennial Instagram users said their significant others don't like it when they post "unapproved" photos of them on social media. Moreover, 40 percent of the same men admitted that they've fought with their partner over a photo they posted.

I'm going to go ahead and assume that they didn't get approval for the ones they're fighting over.

If your partner fulfills all nine signs, congrats! You officially have an Instagram Boyfriend or Girlfriend. And that's a milestone worth documenting with a photoshoot, don't you think?